Why Would God Kill Moses? 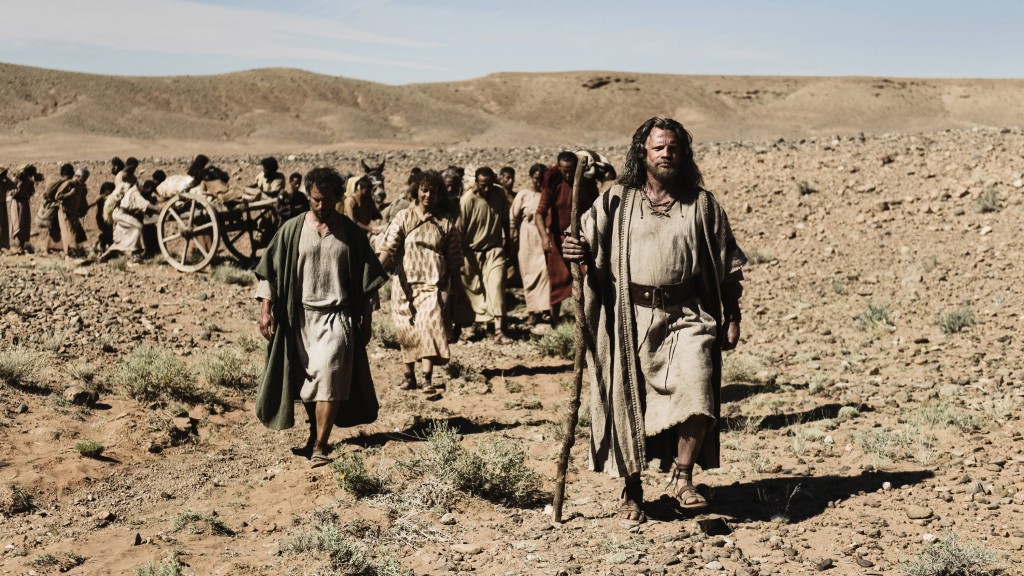 There is a bizarre incident early in the book of Exodus that reveals a fundamental principle about God’s relationship with Israel. Brief, it seems secondary to the bigger story of the Exodus. It is, however, at the very heart of the matter. Importantly, the strange episode draws our attention to events today. It serves as a stern warning against defying God on the issue of Israel.

As Moses embarked on his journey to Egypt to demand that Pharaoh release Israel from bondage, “It was on the way, in the lodging, that the LORD encountered him and sought to kill him. So Zipporah took a sharp stone and cut off the foreskin of her son and touched it to his feet; and she said, ‘You are a bridegroom of blood to me.’ So He released him; then she said, ‘A bridegroom of blood because of the circumcision’” (Ex. 4:24-26). It appears that God attempted to kill Moses (this is the usual interpretation).

God instructs Moses to fulfill a great mission to lead Israel out of Egypt (3:10) and, just as he commences, God wants him dead. Then, just as quickly, God relents without explanation. Just three verses. Then the narrative moves on with the Exodus story.

The incongruity of this event demands that we investigate. Too, we will see a remarkable parallel between Pharaoh’s refusals to let Israel go and Moses’ ongoing evasions of God’s instructions.

One question is key: Why did God want to kill Moses?

In the Bible, we usually know why people are punished by God or at least there is a prophetic warning beforehand: Adam and Eve, Cain, the city of Nineveh. In our story, it seems no reason is given.

Neglecting the Covenant of Circumcision –really?

Bible commentators, Jewish and Christian, look for the answer in the context, specifically, in the two verses that follow God’s attempt to kill Moses. Zipporah, Moses’ wife, circumcised their son. As a result, God “released him” from a fatal illness. He stopped trying to kill him. The circumcision, it seems, appeased God.

Jewish commentators Rashi and Sforno deduced from this that Moses had neglected to carry out the covenantal circumcision on his son. God was angry with Moses to the point of wanting to kill him. Christian commentators generally have the same view.

But this answer is problematic:

Does the Bible actually say that? Translations that mislead 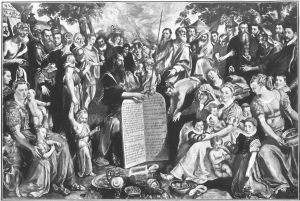 Many readers will be surprised to learn the Bible does not say God sought to kill Moses. The original Hebrew text does not name the person. In Hebrew, Exodus 4:24 only uses pronouns: “The LORD encountered him and sought to kill him.” Must “him” refer only to Moses? We know that four people started the journey: Moses, Zipporah and their two sons, Gershom and Eliezer. The only one we can exclude with certainty is Zipporah.

The New International Version (NIV), a popular English Bible translation, inserts the name “Moses” in the text instead of translating “him” literally. In its preface, the editors admit they sometimes substitute pronouns with proper nouns or names for the sake of clarity. However well-intentioned, it takes considerable audac-
ity to alter the text.

To their credit, the editors say in a footnote that “him” could refer to Moses’ son, but many never read the small print. Rather than clarifying, the NIV’s text coerces the reader into thinking Moses is God’s target.

The purposeful mistranslation, “Moses” instead of “him,” is widespread among Christian translations and occasionally among Jewish ones. Some don’t indicate a change has been made, leaving the reader unaware the text has been “corrupted” by interpretation.

So who is God’s intended victim? Moses, Gershom or Eliezer? While many think Moses, each one has been suggested by different commentators.

Medieval commentator Ibn Ezra suggested Eliezer. Another, Rashbam, wrote God tried to kill Moses, but for a different reason: Rashbam claimed God wanted to punish Moses for having delayed carrying out God’s command to go to speak to Pharaoh.

By now some readers are asking: Does it even matter which one? Stop the hairsplitting and focus on the redemptive story of the Exodus.

In fact, the “who” and the “why” are critical to understanding the Exodus. Both aspects must be considered together to comprehend the underlying message.

I agree with Rashbam, but only partly. God punished Moses for delaying his mission, but the person He was trying to kill was not Moses, but Gershom his firstborn.

Instead of looking at verses 25 and 26 after God’s attempt to kill someone, we should look at the verses before, namely verses 22 and 23. There God instructs Moses to tell Pharaoh: “So said the LORD, My firstborn son is Israel. And I say to you, Send out My son that he may serve Me; but you refused to send him out; behold, I shall kill your firstborn son.”

God has a purpose for Israel. It should be a holy nation, a kingdom of priests. God’s servants, not Pharaoh’s slaves. God’s plan is to free Israel, give the people the Law and bring them to the Promised Land. There, His nation will fulfill its priestly function as the “firstborn son” among the nations. It is God’s portion, His possession. Israel is not Pharaoh’s to trifle with.

It is interesting that Moses didn’t repeat what God told him to say (vv. 22-23) to Pharaoh at their first meeting. At least, the Bible doesn’t record it. One might even expect those words to be said right before the tenth plague, the slaying of the Egyptian firstborn. But they are not mentioned there either. Note also that God said, “but you refused to send him out,” before Moses had even met Pharaoh and had a chance to refuse. The phrase in Hebrew is in the past tense (va-tema’en, with the “vav-consecutive”), even though most Christian translations incorrectly use the conditional future (“if you will refuse…then…”).

The warning seems to be contextually and chronologically out of place. It is peculiar that it occurs here right before God seeks to kill someone in Moses’ family. It only makes sense if the threat is directed at Moses’ family.

That’s the whole point. True, this is a warning to Pharaoh, as verse 22 makes clear. But it is also a message to Moses who, similarly to Pharaoh, delayed Israel’s release from bondage.

The 10 refusals of Pharaoh…and of Moses 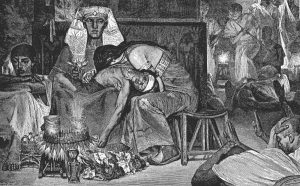 Everyone knows Pharaoh refused to release Israel 10 times, culminating in the final plague, the killing of the firstborn in Egypt. Few realize, however, Moses also avoided, or delayed, carrying out his mission 10 times. He found reasons not to go, suggested alternatives, remained unconvinced or was slow to act. How unlike Abraham who journeyed to Moriah without protest.

For brevity’s sake, I will only mention the two that frame our particular story, the ninth and tenth evasions.

The ninth delay occurred just as Moses embarked on his journey. Instead of rushing to Egypt, he took his whole family along, obviously slowing him down. We know this was an error because he ultimately sent them back to Midian (18:1-6).

After nine delays and evasions by Moses, God said to him, “You shall say to Pharaoh, So said the LORD, My firstborn son is Israel. And I say to you, Send My son that he may serve Me–but you refused to send him out; behold I shall kill your firstborn son” (4:22-23).

We come to the tenth and potentially fatal delay. On the way to Egypt, Moses stopped to spend the night at an inn. That the family needed to rest is understandable. But it was wrong to take them in the first place and now the mission was delayed again.

It is here God tries to kill not Moses, but Gershom his firstborn son. We can now understand why the warning to Pharaoh about the killing of the firstborn was placed before Moses’ tenth delay and not elsewhere, such as before the tenth plague a few chapters later. This is the perfect place. There is no incongruity.

Measure for measure, or, what you sow you reap

Moses’ repeated evasions, his lack of faith in himself and even in God as Guarantor of his mission prefigured Pharaoh’s 10 rejections of God’s plan. He even faced the same threat as Pharaoh: his firstborn’s death. It’s the biblical principle of midah k’neged midah, measure for measure, or what you sow you shall reap. If Moses or Pharaoh trifle with God’s firstborn son, Israel, He will trifle with their firstborn.

The circumcision of the infant Gershom saved his life. Zipporah demonstratively touched the foreskin to the child’s feet (not Moses’ feet, as is often inserted in translations). God was merciful and the threat to the firstborn passed. One cannot avoid the allusion to the Israelites who later daubed blood on their doorposts and lintels to escape the plague that befell the firstborn of Egypt. The Hebrew root verb for touching (נ,ג,ע) the bloodied foreskin to Gershom’s feet (4:25) remarkably is the same for the subsequent act of placing blood on the doorposts (12:22), sadly lost in translations.

There are several textual reasons to prefer the interpretation “Gershom’s feet” rather than the common one, “Moses’ feet.” But they go beyond the scope of this essay. I’ll just mention that in Hebrew again only pronouns are used, no names: “She touched it to his feet” (4:25). Gershom is the object of discussion immediately prior, not Moses. Even the phrase often translated as “husband of blood” or similarly (4:25-26) does not necessarily mean “husband,” but rather, “one bound” in a covenant, referring to Gershom’s circumcision. But that’s another Bible study.

The puzzle is solved

In conclusion, a question of identity has been resolved and a curious passage has become clear. We have seen how translations can misdirect our understanding. Does it matter whether we know whom God is trying to kill? Absolutely. The fact that Gershom the firstborn son was the intended victim, and not Moses, emphasizes Israel’s status as God’s firstborn son. A transitory incident that seemed a mere digression now stands as a banner over the entire Exodus story.

But this is not only a Bible study. What is this story’s relevance today?

The consequences of Moses’ evasions foreshadowed the greater drama of Pharaoh’s opposition to God’s plan. And both foreshadowed an even greater drama unfolding in our days. The episode’s relevance is in its timely warning. If God punished the king of Egypt for preventing Israel from achieving its destiny, and would even have punished Moses, the future religious and political leader of Israel, for delaying it, what does that bode for leaders in our days?

The leaders of the international community, with prejudice and guile, ignore terrible suffering around the world to uniquely focus their hypocritical condemnations on the Jewish state. Their goal is to force Israel to surrender its God-given land, thereby hindering His plan. More than ever before, nations are determined to isolate, boycott and extort Israel, placing themselves in direct conflict with God. The prophet warns, “the LORD will roar from Zion” (Joel 4:16; or 3:16 in some transl.), when He judges them for dividing the Land of Israel.

Israel’s leaders, religious and political, too, are warned about delaying God’s plan for Israel. No excuse or evasion is acceptable.

Israel has yet to achieve its God-appointed destiny. But the ingathering, “the first blossoming of our redemption,” has begun. The time has arrived.

Previous Nothing new under the sun – Eccl. 1:9

Next 65 Miracles in One Day