Why don’t you support Israel? 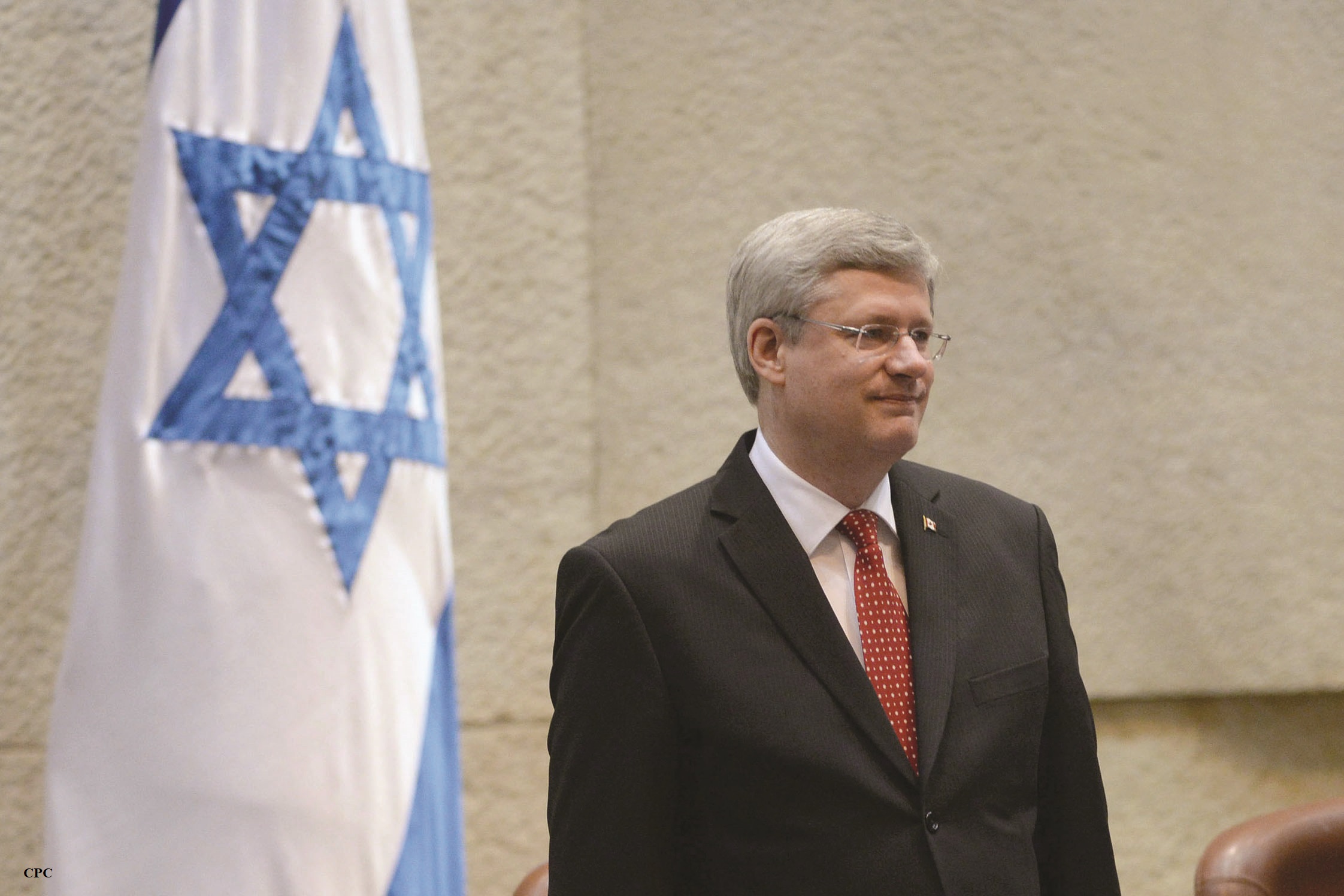 When Stephen Harper, 60, served as Canada’s prime minister (2006-2015), he shocked the diplomatic world with his outspoken support for Israel.

That stand likely cost Canada a seat on the UN Security Council in 2010.

It was a controversial stand, and not one that yielded much political capital domestically, either. Out of Canada’s population of 37 million, only half of Canada’s 375,000 Jews supported his Conservative Party. That affected the election outcome in only 10 of Canada’s 308 electoral districts.

The Canadian Muslim community is three times larger than the Jewish one, but only 12 percent ever supported him. Many Evangelical Christians support Israel, but local economic and social issues are also important to them.

Many heads of state speak niceties about Israel, but few count as true friends. What is it that drove this rare–and costly–pro-Israel stand?

“Through fire and water”

On January 20, 2014, Harper became the first Canadian prime minister to address the Israeli Knesset (parliament). “Canada supports Israel fundamentally because it is right to do so,” he insisted. “We stand up for a free and democratic Jewish state.”

He said, “It is right to support Israel because after generations of persecutions the Jewish people deserve their own homeland.”

And he admitted: “To be clear, we have also periodically made terrible mistakes, as in the refusal of our government in the 1930s to ease the plight of Jewish refugees. But, as a country, at the turning points of history, Canada has consistently chosen, often to our great cost, to stand with others who oppose injustice, and to confront the dark forces of the world.”

Harper assured his listeners that, “Our view on Israel’s right to exist as a Jewish state is absolute and non-negotiable.” To recognize Israel as a Jewish state was provocative given the continued pressure by the European Union and Muslim nations on Israel not to label itself a Jewish state.

The prime minister also commented on the extensive cooperation between Canada and Israel in the scientific and economic fields, but earned the greatest applause with the words, “Through fire and water, Canada will stand with you.”

Were these mere words of diplomacy to boost trade? Political words to encourage tourism? Or were they a reflection of the heart of a friend of Israel?

The prime minister was raised in a liberal Christian home. His father, Joseph, spoke of the Jews as being the chosen people and that they deserved kindness after the Holocaust.

As an adult, the son joined the evangelical Christian and Missionary Alliance, which emphasized the authority of the Bible. He developed his favorable view of Israel even though the church had no particularly Zionist views.

His upbringing, then, formed the foundation which accompanied the aspiring economist and politician throughout his career.

No longer in office, the former prime minister has been consistent in defending Israel, even when there was no need for it.

In a recording broadcast on May 13 this year (www.prageru.com/video/why-dont-you-support-israel/), the former head of state explained his reasons for siding with Israel, despite the great political cost:

When I was Prime Minister of Canada, I was often asked this question: “Why do you support Israel?”

My response, in effect, was always the same: Why wouldn’t I support Israel?

But we don’t live in that rational, common-sense world. So the case for Israel has to be made over and over. I, for one, am happy to make it.

Let me start with this:

Every military action Israel has ever taken has been to protect itself. Israel is not an aggressor state; it’s a defensive state. This has been true from its founding to this day.

As a fledgling nation in 1948, Israel was immediately attacked by its Arab neighbors. Their goal was not to contain the tiny new country; it was to annihilate it. No nation came to Israel’s aid–not the United States, not my country, Canada, not the United Kingdom–no one. They all thought Israel would lose. But it didn’t lose. It won.

In 1967, Israel’s neighbors again sought to utterly destroy the Jewish State, a nation that had then existed for two decades. Again, Israel prevailed. And it survived another all-out attack in 1973.

Those are the big wars, but I’m not sure there has been a single day in Israel’s entire history when some act of terror has not been waged against it–inside or outside its borders.

There have been two bloody waves of terror, so-called intifadas, in the late 1980s and the early 2000s, when Israelis were blown up on buses, at pizza parlors and celebrating weddings. There have been incursions from terror groups like Hizbullah in Lebanon. There have been thousands of rocket attacks from Hamas in the Gaza Strip–even after Israel completely withdrew from that territory in 2005.

In between the wars, in between the terror, Israel has sought peace with its neighbors. And it has achieved peace treaties with Egypt and Jordan. For others, however, every Israeli gesture for peace is met with incitement and violence.

I recount this history for one reason: Any nation that has endured what Israel has endured
could easily have become a police state. But through it all, Israel has never abandoned its
commitment to the rule of law, to democracy, to tolerance. One-fifth of its citizens are Muslim. They enjoy the same rights as Jewish citizens. They occupy key positions in the nation’s courts, press and government. And they have their own parties representing them in the Knesset, Israel’s parliament. To say that Muslims in Israel are the freest Muslims in the region is an understatement.

How about this as a human rights test: Prisoners in Israel, be they Jewish or Arab, are well-treated, well-fed, and have access to the best possible medical care. Parents and spouses of these prisoners know where they are and that they are safe. Who else in the region but Israel can make that claim?

Through all the wars and all the terror, Israel has survived and, especially in the last twenty years, it has thrived. It’s known as “start-up nation,” and with good reason. Key components of your cell phone and your laptop were designed in Israel. A drug or a medical device that has saved your life or the life of a loved one may have been developed in Israel. Yet there are leftist politicians, activists, artists, academics and college students who devote their lives to denouncing Israel, calling for boycotts, demanding it be cut off from academic and professional societies.

With all the brutal and violent regimes, not only in the Middle East, but around the world, how is one to explain singling out Israel for condemnation? Sadly, only one explanation fits: anti-Semitism. Do these haters of Israel question the legitimacy of any other democratic nation? Of any nation, for that matter? Of course, the answer is “no.” Somehow, they only manage to oppose the Jewish one.

The State of Israel has now existed for [over] 70 years. It is one of the freest, most prosperous, most successful nations on earth.

Previous Seeing and not seeing

Next 10 journalists from Germany