Far too often, individuals and news media alike parrot words that are mere political fabrications or assumptions, and omit truth. No facts, just complications that make less sense from year to year. They twist or hide the true situation. Former US President Donald Trump called it fake news. By contrast, the real truth is typically very simple.

Albert Einstein once said, “If you cannot state something simply, then you yourself don’t understand it.” Raised in a German-speaking home and conversant in several languages, the Nobel Prize-winning physicist still had his lectures translated into proper English. Once he even rewrote the text himself so a 14-year-old youth would understand it. The truth was preserved clearly, which was most critical.

Regarding Israel, I want to mention some false terms we often hear: Palestinians, West Bank, occupied territories, two-state solution, land for peace. I just don’t accept such terminology, and certainly not for the sake of conformity.

Golda Meir, Israel’s prime minister from 1969-1974, said it correctly: “There is no Palestinian people. When I came to Palestine in 1921, this was a Turkish province, barren and barely populated. We, the Jewish inhabitants, were called Palestinians.”

The Arabs who moved there from neighboring countries looking for employment opportunities rejected the term “Palestinian” as “Zionist.” Only when the terrorist leader Yassir Arafat began using the term in 1964 did the Arabs begin applying it to themselves.

I remember living in Poland before WWII. We were over three million Jews who considered Poland a haven for nearly a thousand years. Despite the good relations with the Poles, there were anti-Semites as well. As a child I was taunted, “Zyd do Palestyni!” (Jew to Palestine!).

The name Palestine was given to the region two millennia earlier by Hadrian, the Roman-occupation emperor who hated Israel and Judea. Contemptuously, he renamed the area after the Philistines who had already been extinct for five hundred years.

The Arabs living in this region–today Israel–are not Philistines. These Arab self-declared “Palestinians” have no relation with the historical Philistines with whom they erroneously want to connect. They have never even had a Palestinian state. It is a fantasy entity, not even a dream.

By “West Bank,” the region on the western side of the River Jordan is meant. King Abdullah I of Jordan invented this term. The Bible calls it, simply, Judea, Samaria–Israel. There is no older record. The Bible still counts.

In 1948, Jordan invaded the newly established Israel, took control of part of the territory and the eastern part of Jerusalem, splitting the city for the first time, and barely maintained it. It expelled the Jews, destroyed 58 synagogues and Jewish theological schools (yeshivot) in Jerusalem, and used others as animal stables.

Israel recaptured it all during another war of aggression against Israel, the Six-Day War of June 1967.

In the meantime, Jordan has accepted the status of the area according to international law and has not demanded a return of the “West Bank.” To now label Israel an occupation power is utter nonsense. Israel is a liberation force of its own land, which was given it by the Most High thousands of years ago.

That this term is even applied here contradicts all logic. Whose land has Israel occupied? When the Palestinian Arabs regularly bluff that Israel should retreat to the cease-fire lines of 1967, would it mean that Jordan should be turned into an occupying power over a portion of Israel again (a brazenness of the most absurd sort!)? Or would the Palestinian Arabs be made the owners of a portion of Israel, creating a never-before-existing Palestinian state? That some countries imagine this is a perverse and preposterous presumption foisted on the legal State of Israel.

Some Arab nations already acknowledge the illegal stance of these pseudo-Palestinians and are fostering official ties with Israel. They also admit that the billions of dollars they have given to the Palestinian Authority (PA)–which craftily dodged Israel’s every peace effort–must be considered a loss. Israel is and always has been ready for peace.

How regrettable it is, in contrast, when the executive leadership (director Prof. Dr. Johannes Reimer) of the World Evangelical Alliance (founded in 1846), representing 600 million evangelicals, opposes an Israeli annexation of the Jewish communities of Judea and Samaria. It concerns some 400,000 Jews currently living under military rule that Israel wants to incorporate under civilian government administration. These residents already receive all services Israel provides. The WEA would do well to support it, first of all, based on the Bible, where it is called Judea and Samaria, not West Bank. Certainly, Israel won’t be asking the WEA’s opinion when God has already given the decisive word on the Holy Land in His Torah.

This notion has been around for decades. In 1923, Great Britain under its Mandate power marked off a large portion of the land on the east side of the River Jordan and presto! called it Transjordan. Twenty years later that land became the Hashemite Kingdom of Jordan. There had never before been a Jordanian state; it too was an invention of politicians.

It should also be considered that, according to the San Remo Conference Resolution of April 25, 1920, the League of Nations had been instructed to establish a Jewish state on the soil of “Palestine.” This also legalized an earlier resolution, the Balfour Declaration of 1917, for the Jewish people.

This was not achieved, however, until after the Holocaust. According to United Nations General Assembly Resolution 181, the Partition Plan of November 1947, Israel would be given the remaining land on the western bank of the River Jordan on which to establish the Jewish state. The Arabs living there were also provided for. The Jews, yearning for even the slightest fulfillment of repeated international promises, accepted. Every one of the Arab states, however, rejected the Resolution and so it was never ratified by the UN Security Council. Today, the Palestinian Arabs cite the same resolution in their own support, despite having turned it down almost 75 years ago, even fighting wars against Israel to assure the Jews would never have a state of their own.

Today, Israel lives on the remainder of some 8,100 square miles (21,000 sq. km.) of the Holy Land, just one-fifth of the land originally designated for a Jewish state. Israel’s Arab neighbors have over five million square miles (13 million sq. km.). They have 620 times more land and no need for more.

Beginning in mid-November 2020, government representatives of various Arab nations visited Jerusalem to officially establish diplomatic relations with Israel and open embassies. During the same time, however, German Ambassador to the United Nations, Günter Sautter, scolded Israel at the UN Security Council “because it wants to build homes in the occupied territories and Jerusalem in order to create facts on the ground, which will hinder a two-state solution [Israel and Palestine]” (November 18, 2020).

I can easily cite more than a dozen Bible references prophesying Israel’s restoration, the building of homes, land ownership, and sowing and harvesting on this very land. There is nothing about creating a Palestinian state. But the Bible is of no apparent interest to German Chancellor Angela Merkel, a minister’s daughter.

Jews as well as Christians know the Bible, beginning with Genesis, speaks consistently about this area as the Promised Land, the possession of the children of Israel, and of Jerusalem as God’s earthly dwelling place (Zech. 8:3) on earth. It says nothing about two states on this Holy Land. And a divided city of Jerusalem would even violate the first of the Ten Commandments. God does not want any rival.

Land giveaway for promises of peace?

In Gaza, Israel committed itself to land divestiture. In 2005, Israel expelled over 8,000 Jews from this ancient Jewish region in which, according to the Bible, numerous events involving the Israelites took place and which belongs to the tribe of Judah. Many of the Jews were Holocaust survivors and repatriates from the Diaspora (Dispersion), and had built up Gaza over decades. Today they are elderly and barely able to still find work. 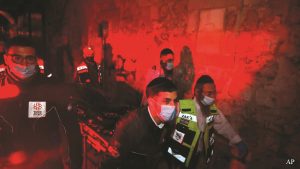 I think back of the new synagogues, homes, fruit- and vegetable-greenhouses and nurseries. LEMA’AN ZION helped several times, including paying for the air conditioning for one of the synagogues. What did Israel receive for the motto “land for peace”? Years of rocket-fire. Israeli towns and villages near Gaza under a regular hail of missiles. Alarms, school closings, dead and wounded–and a mere 15 seconds’ time to get to the air-raid shelter when the sirens begin wailing. And today there is new “technology”: Thousands of air balloons carrying inflammable loads. Vast areas with fields of crops and tree orchards have been ravaged by arson from Gaza, which is ruled by the Hamas terrorist organization.

Non-Jews also lived in Israel thousands of years ago. According to God’s order, they were to also have a part in the beneficial rights of the land if they followed the law. As it was then, so it is today. The Arab fellow citizens in Israel are better off than in most Muslim-dominated countries. And during the coronavirus pandemic, Israel helped the Palestinian Authority by all available means.

Prime Minister Golda Meir observed correctly that for our Muslim neighbors, or even fellow residents, it is not a question of land. They have no shortage of land. They simply don’t want the existence of Israel. Of Jews. For the same reason they opposed the Partition Plan of 1947.

Nor is Jerusalem so holy to Muslims. While Jews always face Jerusalem when they pray, regardless of where they are in the world, Muslims face Mecca in Saudi Arabia, even when they live in Jerusalem.

The battle against the people of Israel has existed since the days of our patriarchs. It is the battle of the adversary one against the Most High God. What has come for all the world through the Jews? “Salvation is of the Jews” (Jn. 4:22). All Bible believers should reflect on this. I want to close with the world-famous proclamation: Israel offers peace, true SHALOM!

Previous For the sake of peace, shouldn’t Israel allow a Palestinian state?

Next Israel number one in coronavirus vaccinations