We are all Noah now

Finding parallels between the Bible and life today is the realm of rabbis and ministers, but sometimes even laymen see the obvious:

This has been the year when all of us have been isolated like Noah. Of course, we have it somewhat easier. He spent a year adrift at sea. We needn’t deal with sea sickness. We can still shop for groceries and go to doctor’s appointments.

This has also been the year when the peculiar texts of Leviticus 13 and 14 have become the world’s nightmare. Contamination, quarantining and disinfecting the home are de rigueur for those who have become victims of the coronavirus.

Israel has been spared the worst of the affliction.

True, there was stifling confusion from miscommunication, arguing scientists and government officials, a nationwide lockdown amid initial lack of cooperation, and widespread grumbling by parents unable to juggle video school-lessons for their children with too few computers at home. 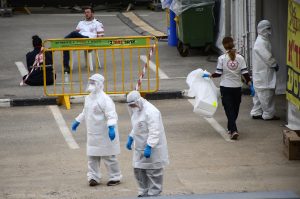 Still, the strict measures imposed by the government early on kept deaths in this nation of 9.19 million people down to 225 deaths among 16,100 cases of infection by May 1. The death rates in Austria, Canada, Germany, the Netherlands, Sweden, Switzerland and the USA are many times higher.

Several hospitals reported having no new patients for several days leading to some coronavirus wards being dismantled. Hospital treatment was the same for Jews and Arabs, young and old. No distinctions are ever made in Israel based on religion, ethnicity, gender or age. No politician asked the elderly to “sacrifice” to make space for younger and stronger ones.

While the virus impact locally was the top Israeli story for weeks, Israel was busy helping other nations, continuing research, and doing good.

• Israeli inventors published free blueprints for building a ventilator for about US$500. The plans were downloaded 19,000 times in the first hour after release. Hundreds of groups are assembling the ventilators in a rush to provide them to Africa, where they are desperately needed (only 2,000 ventilators for 41 countries). Conservative estimates predict a minimum of 122 million people will become infected.

• Israel invited dozens of Arab doctors and medical workers from Judea and Samaria (the West Bank), and from Gaza for training in Israel on how to treat coronavirus patients, and provided protective equipment to use in their under-supplied clinics.

(This did not prevent the Palestinian Authority from accusing Israel of spreading the pandemic among the Palestinians and refusing to explain how to fight it. Conspiracy theories about a Jewish coronavirus plot abound in the PA and throughout the Middle East.)

• Meanwhile, in dozens of labs across Israel research is ongoing to find a coronavirus cure (some with successful initial results), and to develop better treatments and equipment. One treatment from RedHill Biopharma is being used on 160 COVID-19 respiratory patients with life-threatening symptoms in three hospitals in Northern Italy.

• Farmers, unable to sell their crops to food processors since restaurants have been closed, have given thousands of tons of produce to national food banks for distribution among the many needy.

Tragically, Israel still needs to contend with terror attacks from Gaza every week, along with hostile threats from new Iranian emplacements along the Syrian border with Israel. In addition, Iran’s April test launch of a new three-stage missile with extended range poses a very serious threat to Israel for which no suitable defense exists. Stabbing attacks within Israel continue as well.

But sometimes there are good reports. A survey released by Tel Aviv University in April revealed that Arabs living among Jews have a nationalistic outlook. Among non-Jewish Israelis, 23 percent define themselves primarily as “Israeli” and 51 percent identify themselves as “Israeli-Arab.” Only seven percent still call themselves “Palestinian.” A year ago, 18 percent self-identified as “Palestinian.”

For the majority of Israelis confined at home, however, the most pressing need is not being able to participate in normal everyday life. It is easy to imagine those feelings were shared by Noah and his family millennia ago.

Previous Everything is in God’s hands