A major stir among evangelicals occurred when American Pastor Andy Stanley of Northpoint Church in Atlanta suggested during a broadcast sermon that Christians need to “unhitch” (disconnect) from the Jewish Scriptures as Paul, Peter and James had done. He expanded that they unhitched the church from the worldview, value system and regulations of the Jewish Scriptures.

So what’s the problem? Stanley is hardly unique. Replacement theology (supersessionism) has existed since the second century, by which time Christianity was already abandoning its Jewish roots (cf. Ignatius, Justin, Origen, Tertullian). But Stanley heads a megachurch of 40,000 members and has a viewing audience of millions. He is considered one of the five most influential pastors in the USA today. That makes his public statements, however flawed, significant.

You may hear in Stanley’s words hints of the First Nicaean Council of 325. As a matter of fact, Stanley referred to the convocation during his sermon, though without mentioning its anti-Jewish invective.

At Nicaea, 318 bishops decided to change the practice of celebrating Easter according to the date of the Jewish Feast of Passover. Anti-Jewish sentiment was central to the council’s decision to “unhitch” from the historical Jewish date: “It was declared to be particularly unworthy for this, the holiest of all festivals [Easter] to follow the custom of the Jews….We ought not…to have anything in common with the Jews….We desire, dearest brethren, to separate ourselves from the detestable company of the Jews….” (Eusebius; emphasis added, also in following quotes).

What did Jesus say?

Detaching from the Jewish Scriptures (Old Testament, or Tanach in Hebrew) might prove difficult. I assume Stanley never counted how many times the New Testament quotes the Old Testament: 456 times!

Jesus said repeatedly, “It is written….” or, “Have you not read…?” referring to the Old Testament. And, “For truly I say to you, until heaven and earth pass away, one jot or one tittle will not pass from the Law until all is accomplished” (Matt. 5:18). And, “Show yourself to the priest and offer the gift that Moses commanded” (Matt. 8:4).

No need for the Old Testament?

According to Stanley, the resurrection is the defining moment for Christianity, at which point the transition to a new religious system occurred, one that now embraced the gentiles. It did away with the old system based on the calling and uniqueness of the Jewish nation and the promises of the Jewish Scriptures. What was before had now ended, had been superseded.

I do not diminish the importance of the resurrection for Christians or of the acceptance of gentiles, but Stanley’s perfunctory dismissal of Israel’s unique role is contradicted by Paul who wrote, “The gifts and calling of God are irrevocable” (Rom. 11:29; see also 3:1-3; 9:4-5; 11:1-2).

After the resurrection, Jesus continued to refer to the Old Testament (Lk. 24:45-46). Further, heaven and earth still have not passed away and, therefore, neither has the Law for Jews. Clearly, Jesus and the New Testament writers, even Paul, never felt the urge to detach from the Tanach as Stanley does.

Stanley’s inaccuracies continue. He asserted the Jewish Scriptures, even the Ten Commandments, were not a “go-to source” (a guide) regarding any behavior for the church. Once again he is refuted by the same New Testament he upholds above all other Scriptures: “All Scripture is inspired by God and is useful for teaching, for reproof, for correction, and for training in righteousness….” (2 Tim. 3:16). The Old Testament is absolutely a behavioral guide for all, if not in the details of the laws for the Jews, then at least in the spirit of the Law.

If Christians abandon a Jewish scriptural worldview, a biblically-inspired Jewish way of thinking, as Stanley suggests, how can they possibly understand the text they read and cherish? The New Testament is permeated with Jewish terms, concepts, even rabbinical quotes.

What about the Jewish biblical feasts? “Passover” is mentioned thirty times. “Shavuot” (Pentecost) and “Sukkot” (Feast of Tabernacles) are also mentioned.

Even the rabbinically mandated holiday of Chanukah, the “Feast of Dedication,” gets a mention (Jn. 10:22). Martin Luther’s German translation mistranslated Chanukah as “Kirchweihe” (“Church Dedication”), though it actually refers to the dedication of the Temple.

The major Christian celebrations? “Easter” and “Christmas” are not found in the New Testament. The historical events that inspired them are mentioned, but the festivals themselves are not. Some translations refer one time to Easter (Acts 12:4), but that is actually a mistranslation of the term for Passover.

Stanley is eager to dejudaize Christianity. One wonders, though, how he relates to the church policy of syncretism (merging) of Christian and pagan traditions in antiquity to attract new converts. Easter originally derived from Eostre (Ostara), the Saxon pagan goddess of fertility celebrated at the spring equinox. Christmas derived from christianizing the pagan Roman holiday Saturnalia at the winter solstice, marking the sun’s annual rebirth (dies solis invicti nati). It was celebrated with gift-giving, decorations of evergreens and candles.

“Sabbath”? “Temple”? “Synagogue”? There are scores of references in the New Testament.

But “church”? Despite the many later translations, “church” is not found even once in the Greek text of the New Testament, since the word did not yet exist. The Greek text uses the word “ekklēsia,” meaning “assembly of the summoned.” It was translated as “church,” interpreted backwards in time into the text, but not from the text. Ekklēsia was formally used since the 7th century B.C. referring to civic gatherings (of citizens “called out” from the general populace). Colloquially, it could even refer to pagan religious forums in antiquity. It became a generic term, like association. Ekklēsia could also refer to a synagogue (cf. Josephus).

Not a numbers game

It’s not about numbers and who wins. But it should be very obvious to everyone, if not to Rev. Stanley, that the New Testament is a very Jewish book, rooted in the Jewish Scriptures. 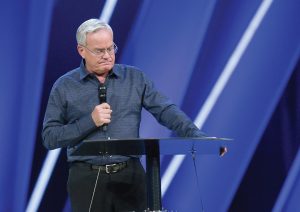 I do not expect Christians to become Jews, to observe the Jewish feasts, the minutiae of dietary laws and the like. Nor do I expect Christians to abandon the thousands of man-made traditions, many beautiful and meaningful, they have created to express their faith in all its cultural diversity among more than 34,000 Christian denominations worldwide.

I do, however, wish to lay bare the ill-informed view about the New Testament that rejects its original Jewish character and content. This distorts many of the messages it contains. Further, it causes antipathy towards Israel and the Jewish people, as history repeatedly attests.

One who believes Israel was rejected by God and replaced by the church will reject Israel’s prophesied restoration. Some will react to Israel today based on secular political trends (including anti-Semitic ones, such as boycotting Israel).

Tellingly, Stanley considers Rev. Bill Hybels, formerly of the Willow Creek Community Church, one of his mentors. Hybels and his wife Lynne are known for their pro-Palestinian sympathies and criticism of Israel. Lynne has been a regular speaker at the anti-Israel “Christ at the Checkpoint” conferences held at the Bethlehem Bible College in the Palestinian Authority.

For several years, evangelical leaders have sounded the alarm. Faith among Millennials and Gen Z-ers is waning. Church attendance is down. Support for Israel is also falling victim to a new worldview among younger Christians.

Biblical beliefs and morals considered old-fashioned are replaced by the mantras of secular “social justice” and globalist movements today. As a new generation of believers, better versed in the social media than the Bible, takes charge, expressions of pro-Israelism are downplayed (or derided as favoritism or tribalism) and Jewish roots are ignored. Those who still attend church-sponsored Israel-related events tend to be the elderly.

Tragically, young Christians today hear more anti-Israel words at school, in the media or elsewhere in a single day than expressions of love for Israel from some pastors in a year. It has its effect. Resistance to anti-Israelism and replacement theology is wearing down.

Thankfully, many evangelicals, especially in the USA and in South America, are at the forefront of support for Israel. Also, many Christian friends in mainstream churches worldwide are taking a stand. They are still a source of blessings for the nations they represent.

Previous Arabs are fed up with the Palestinians

Next What are Israel’s Arab neighbors saying?