Two ministers, two opposing views of Israel and the Jews 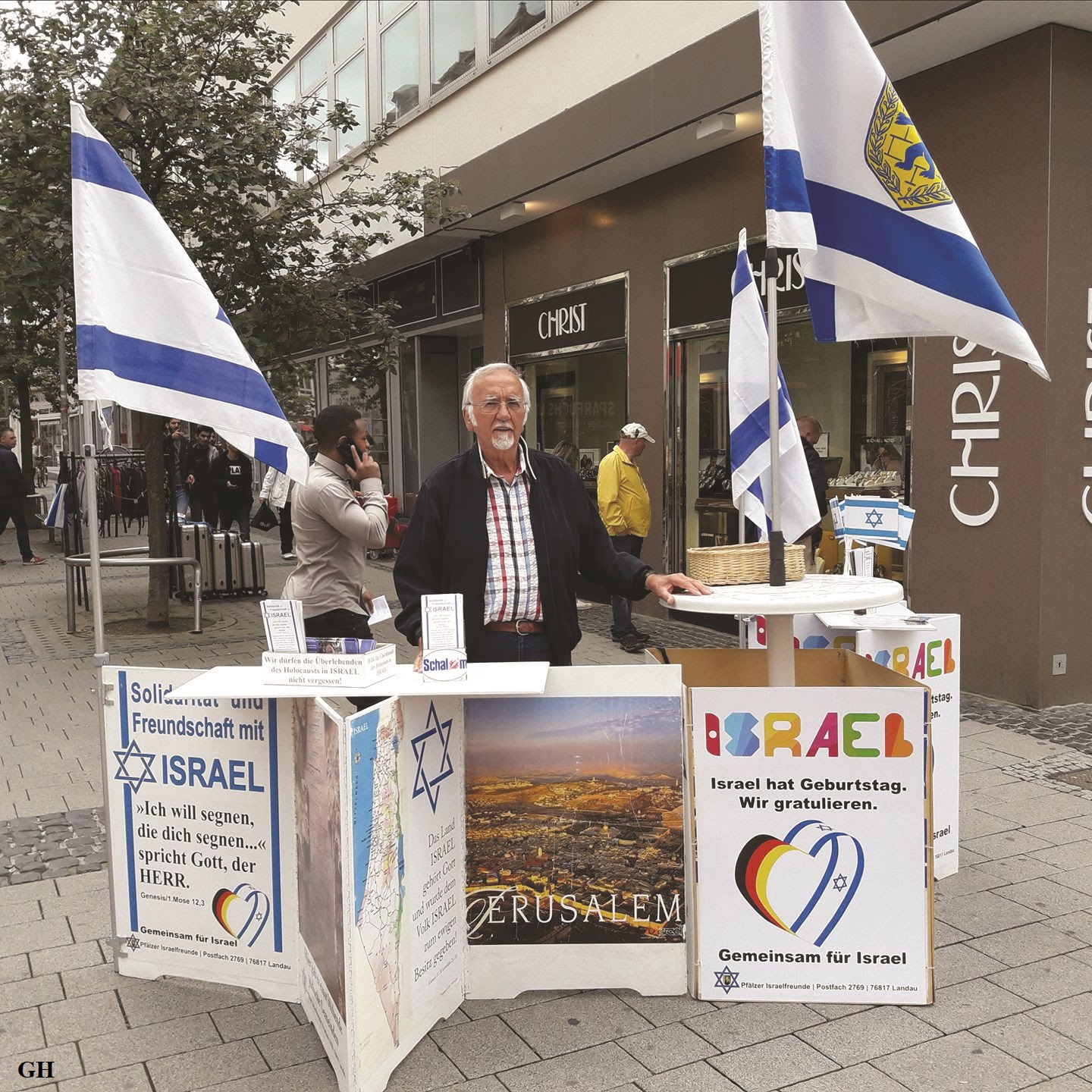 Two leaders in the Christian community died a day after Christmas. Though committed to the same Gospel, their lives diverged enormously on the subject of the Jews.

Born in St. Georgen in the heart of Germany’s Black Forest on April 25, 1940, Gerhard M. Heinzmann succumbed to the coronavirus at age 81. A widower, he is survived by five children and 10 grandchildren.

As a young adult in 1962, he became a pastor in the Pentecostal movement. Inspired by the testimony of Roma-Sinti classmates in Bible seminary, he founded the International Gypsy Mission, Germany, in 1967, which he led for 24 years and was affiliated with until last year. He travelled across Central and Eastern Europe and ministered in a giant tent to tens of thousands of Romas.

In 1989, however, other matters also drew his attention.

He was troubled by the political direction of Germany as liberal ideas from the Bonn capital impacted the lives of citizens (and devout Christians), and he bristled at Germany’s relentlessly critical stand against Israel. Heinzmann was determined to offer a conservative Christian alternative committed to protecting family values and unborn children. He founded the Party of Bible-Faithful Christians (PBC), which he headed till 2005.

Primary among his goals was urging Germany to side with rather than against Israel. His banner slogan was visible wherever he travelled, and on nearly every document he published: “Solidarity and friendship with Israel.” But he was still more brazen, always adding a Bible quote: “I will bless those who bless you” (Gen. 12:3). For an audience that included mostly secular Germans, it was a provocative challenge.

With thousands of members active in local and regional elections, the PBC influenced legislation with mixed success.

Large PBC placards were visible in towns across Germany, particularly in the Rhenish Palatinate and in Saxony, framed by Israeli flags. Volunteers manning tables became a familiar part of the scenery on the main shopping streets and in open-air markets. On Saturdays, party coworkers would hand out leaflets and engage shoppers in conversations. Pastor Heinzmann himself was often in their midst, a warm and sincere smile on his lips as persuasive facts rolled off his tongue, though he was equally at home hobnobbing with German and Israeli dignitaries and diplomats.

We had a connection with the PBC’s early documentation efforts: It published maps, which we had developed, showing the history of the modern State of Israel.

One incident especially evokes memories: In 1990 Pastor Heinzmann heard our presentation for the first time in a meeting south of Frankfurt. Afterwards, he invited us to join him for meetings he would organize. We agreed enthusiastically. The first was planned for St. Georgen, his birthplace.

Upon our arrival, we were met by a private security company in uniform, whose officers checked all visitors with metal-detecting wands and inspected ladies’ handbags for weapons. To no surprise, guests found that jarring. When he began the program that evening, Pastor Heinzmann explained that he had hired the security firm himself because he wanted people to understand what measures Israelis had to go through to protect themselves against the threat of terrorism, whether to go shopping, going to school, riding on a bus, or attending a religious service. It was a poignant moment as visitors understood the reality Israelis live with daily.

In more recent years, Pastor Heinzmann reduced his activities, but again his passion for Israel was at the forefront. He founded the Palatinate Friends of Israel in 2013, organized pro-Israel marches with hundreds of Christians participating, raised funds to plant forests in Israel, and conducted tours to Israel.

His efforts were not without opposition. Frequently, he and his co-workers were accosted by angry Muslims who hurled vulgarities and vicious accusations at them and ripped up their Israeli flags. Sometimes, police intervened to prevent escalating violence. But on his website he stated that, increasingly, it was people of German descent who cursed the Christians’ public pro-Israel stance by saying, for example, they should be “gassed like the Jews.”

None of it moved Pastor Heinzmann. He remained unshaken and continued in his mission without letup.

He was a humble man with huge ambitions and a consistent strategy of boldness. When he reached Heaven’s portals, I can hear the words of welcome being uttered: “Well done, good and faithful servant: you have been faithful over a few things, I will make you ruler over many things: enter into the joy of your Lord” (Mt. 25:21).

The obituaries had already been written months ago, as is the custom among the news media. The list of accolades and words of adulation from the world’s elite had already been collected and edited for publication. All that remained was for the date of Desmond Tutu’s death to be announced and news editors worldwide would give the go-ahead to go to press.

So when the date came, the tightly-honed narratives appeared as prosaic praise for the celebrated peacemaker and bridge-builder: Nobel Peace Prize winner in 1984, first black archbishop of the Anglican Church in South Africa, recipient of a hundred honorary degrees, chair of the Truth and Reconciliation Commission of post-Apartheid South Africa, orator, author, theologian, whose presence in any gathering lent it legitimacy, an A-list guest of world leaders and celebrities. 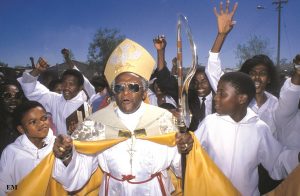 Born October 7, 1931, Tutu was the son of a Methodist primary school principal. He is survived by his wife Nomalizo Leah (wed in 1955), four children and nine grandchildren.

He was raised as a Methodist, but the family became Episcopalian, later joining the Anglican Church. In 1960, Tutu was ordained in the Anglican Church and served as a priest for 60 years. Throughout, he fiercely opposed racial segregation. In 1986 he became the Church’s first black archbishop.

After the fall of Apartheid in South Africa in the early 1990s, he was called on by newly elected government-head Nelson Mandela to help restore peace in a society polarized by half a century of racist policies. The Truth Commission he chaired would become the key to reconciliation in the broken nation.

In 1989 he visited Israel and laid a wreath at the Yad Vashem Holocaust Memorial in Jerusalem, but caused an uproar when he said Jews should forgive the Nazis. Fellow Nobel Peace laureate (1986) Elie Wiesel chastised Tutu. “No one has the right to forgive except the dead themselves,” Wiesel said, “and the dead were killed and silenced by their murderers.” He said Tutu’s statement displayed “a disturbing lack of sensitivity toward the Jewish victims and their survivors.” (Jewish Telegraph Agency, December 28, 1989)

For years, Tutu also targeted Israel for its so-called mistreatment of Palestinian-Arabs. There were statements comparing Israel with Nazi Germany. Many of the quotes were compiled by South Africans who opposed his being the patron of two Holocaust Centers in South Africa, as he was using that role as legitimization for his anti-Jewish rhetoric.

Harvard Law School Professor Alan Dershowitz took him to task (“Bishop Tutu is no saint when it comes to Jews,” Gatestone Institute, December 20, 2010): “[Tutu] has minimized the suffering of those murdered in the Holocaust by asserting that ‘the gas chambers’ made for ‘a neater death’ than did ‘Apartheid.’” Tutu must have walked through Yad Vashem with his eyes closed.

In various attacks he accused Jews, not just Israelis, of “arrogance,” of being “too powerful,” of “causing many of the world’s problems,” and denied that Israel is a “civilized democracy.”

Tutu compared Israel to Hitler’s Germany, Stalin’s Soviet Union and Apartheid South Africa, saying they too were once “very powerful” but they “bit the dust,” as will “unjust” Israel. Calling the Jews “a peculiar people,” Tutu said, “they can’t ever hope to be judged by the same standards which are used for other people.” (“Should the late Bishop Tutu get a statue?” Gatestone Institute, Alan M. Dershowitz, December 28, 2021)

“There is a name for non-Jews who hold Jews to a double standard,” says Dershowitz. “It is called anti-Semitism.” (ibid.)

Others recognize the age-old canards about Jews, power and money. That conflicts with modern-day Israel as a vibrant, successful, pioneering, diverse and open society for all its citizens, whether Jews, Muslims, Christians or others, a nation of prophetic fulfillment. The existence of Israel refutes traditional supersessionist/replacement theology, which deems the Jewish nation obsolete, replaced by the “New” Israel, i.e. Christians.

Archbishop Tutu’s Nobel Peace Prize for his human rights achievements in South Africa should not be a shield against criticism for his significant human rights shortcoming, namely his anti-Semitism, including his separate standard for Jews, his singling out of Israeli behavior for criticism, his support of BDS, his anti-Zionism, and his use of traditional anti-Jewish tropes. Though a celebrated hero of Black human rights in his native South Africa, he was a flawed leader, blinded in one eye.

Next The Christmas ambush