THE WORD – not words 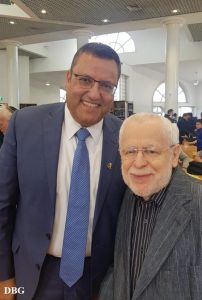 From my father of blessed memory I learned during my youth that a man loses his purpose in life if he thinks only of himself without helping his fellowman. I realized that the truth for our sphere of life and our eternity is documented by God in the Bible.

Still as a young man, when I then gave up the banking career for which I had trained and decided to become a Bible teacher, I sought schools and teachers whose focus was God’s Word. I found such in Germany, Switzerland, Sweden, Canada and the USA. I studied in other fields as well, but I stayed with this as my primary area of emphasis

“Your word is a lamp unto my feet, and a light unto my path” (Ps. 119:105). This wasn’t merely a maxim from the time of King David, it was a principle of life for our collective Jewish people

through bright and dark days. Israel literally went through the deepest valleys of suffering in all the world from millennium to millennium. Some people could only marvel that Jews still believed in God after Auschwitz and the death camps of the last century. But Jews do still believe, despite all of it.

Since 1948, the Jewish state of Israel has been restored. Jews came home from nations around the globe speaking many languages. What God said was fulfilled, that they would return from the east, west, north and south, “from the ends of the earth” (Isa. 43:5-6). God’s promise was and remains, “I will bring them…from the farthest parts of the earth….[F]or I am a father to Israel” (Jer. 31:8-9 [7-8]). “For the word of the LORD is right; and all His works are done in truth” (Ps. 33:4).

The enemy, the father of lies, is against everything God has made and that belongs to the Most High. Opposing it all, Satan (the Accuser) has lists like an encyclopedia. Concerning the Jews’

ownership of their land, the nation of Israel has experienced this uninterruptedly. But Israel reads the eternal Word and knows that God has given the land to Israel, “which He swore to your forefathers to give you, a land flowing with milk and honey” (13:5). Yet, the adversary finds many willing accomplices who want to divide up the land. They give reasons that almost have a semblance of logic but are the opposite of God’s Word.

The Roman occupier, Emperor Hadrian (76-138), had the evil plan to completely erase the names of Israel and Judea. He renamed the land Palestina, hearkening back to the Philistines, who had died out 500 years before. This was the name by which our Jewish home was known for nearly 2,000 years.

Nowadays, the Arabs who live here call themselves Palestinians and falsely declare themselves descendants of the Philistines. Previously, the Arabs rejected the label and actually called the Jewish Zionists the Palestinians, but since the 1960s, with the arrival of terrorist leader Yassir Arafat (1929-2004), they have applied it to themselves.

The Arabs living in Israel, many of whom descend from other countries, are better off here than in most Muslim states. As we’ve mentioned often, we have Arabs here who are doctors, lawyers and judges, even serving on the Supreme Court. Thousands of Arabs study in Israeli universities. Arabs, who are our fellow citizens, have all the rights of the Jewish state. A separate independent state of “Palestinians” has never existed in history. Yet, we are called “occupiers” in our own land. Terrorist organizations including Hamas, Islamic Jihad and others make the lives of Jews in the state of Israel very difficult due to brutal attacks.

When Israel’s self-proclaimed enemies speak of a partitioning of Israel, of a two-state solution, it is an utter deception. The members of the Palestinian Authority (PA) consider this just the first step towards the total annihilation of Israel. Both Hamas and Islamic Jihad include the destruction of Israel as one of the statutes in their charter.

Jerusalem according to God’s Word

They also want to divide Jerusalem. But Jerusalem is God’s earthly city of residence. “[T]he LORD said, ‘In Jerusalem….[w]ill I put My Name for ever’” (2 Ki. 21:4, 7; 2 Chron. 6:6). A division would be a violation of the first of the Ten Commandments of the true God. Israel must be very watchful in this regard. From time immemorial–and encompassing the future–this has been the holy site about which it is written, “For out of Zion shall go forth the law, and the word of the LORD from Jerusalem” (Isa. 2:3 [2]; Mic. 4:2). This verse is sung in every synagogue service where the Torah is read. This is a matter of eternal, holy theocratic sovereignty.

What counts is: The Word

In 1950, the Kingdom of Jordan invented a new name for the eastern portion of Israel: West Bank. Worldwide, governments and news media adopted it, tragically Israeli media did too. The Bible has named this region Judea, Samaria, Israel. Jews, who are the People of the Book, should use the names used in the Bible. For myself, the Word counts.

Though hardly a friend of Jews, when even the Reformer Martin Luther (1483-1546) faced Christian opposition he intoned “The Word of God they shall let stand.” Count Nikolaus Ludwig von Zinzendorf (1700-1760), the composer of religious hymns, wrote:
Lord, Thy Word, that sacred treasure,
Let me evermore retain;
Naught of earth can give the pleasure
That I from its wealth may gain.
Were Thy Truth no more to guide us,
How our faith would go astray!
Lord, whatever may betide us,
Let this light illume our way.
_________–Transl. Herman Brueckner, 1726

Finally, and no less important, our Christian readers will recall that the Jewish Jesus spoke this prayer to the Heavenly Father: “Sanctify them through Your truth: Your word is truth” (Jn. 17:17). The same Jesus also said, “salvation is of the Jews” (4:22). With these thoughts I want to close with the timeless greeting of peace, Shalom.

Previous The prospects for peace