The time has come

“Therefore, behold, days are coming, says the LORD, when they shall no more say, ‘The LORD lives, Who brought the Children of Israel up from the land of Egypt,’ but rather, ‘The LORD lives, Who brought up and brought back the seed of the House of Israel from the land of the north and from all the lands where He had driven them’; and they will dwell in their own land” (Jer. 23:7-8).

The Prophet Jeremiah was already aware of this 2,700 year ago. We read here about an epoch so momentous that the Exodus of Israel from Egypt and even the Most High are used as an example for contrast. But do we say so? And with such biblical emphasis? Do we heed this sign of the times?

This counts as well for Jews as for Christians. In synagogues it is communicated through the prescribed weekly readings which, collectively, entail reading the entire Torah (Pentateuch) in the course of a year. In churches and fellowships it is a matter of choice.

I have observed that in nations around the world, people have at least heard about Israel’s Exodus from Egypt. Christian children already learn about it in Sunday School.

Moses and Aaron performed miracles before Pharaoh. There were also plagues that beset Egypt. Pharaoh’s sorcerers were powerless to oppose them and declared, “It is a finger of God” (Exod. 8:15 [19]). For all these events God needed only to move His finger.

But we also read, “Thus says the LORD, Israel is My son, even My firstborn” (4:22). In loving fashion, the Lord led Israel out of the Egyptian house of bondage by “a strong hand” (13:3)

This was followed by the miracle of the crossing of the Red Sea and the defeat of the Egyptian pursuers. Think also of the many miracles during Israel’s wandering in the wilderness: The provision of water and Heavenly manna, even that “Your raiment did not wear out upon you, neither did your foot swell,” (Deut. 8:4), “and your shoe did not wear out upon your foot” (29:4 [5]) during the 40-years’ journey.

There isn’t enough space here to recount the thousand-fold miracles, which the Jewish people experienced in the land God gave them and in the Diaspora, even just the survival of all attacks. The enemy of our souls has hated God’s chosen possession since their beginning continuously. Every Jew who has survived can be considered a miracle child.

On April 14, 1948, after some 2,000 years of non-existence, the Jewish state was reborn, one of the great wonders of the world took place. The Prophet Isaiah expressed his astonishment about it nearly 3,000 years ago: “Who has heard such a thing? Who has seen such things? Shall a land be made to bring forth in one day? Or shall a nation be born at once? For as soon as Zion travailed, she brought forth her children” (66:8).

And immediately after it states, “Rejoice with Jerusalem and be glad with her, all you who love her; exult with her with exultation, all you who mourn for her” (v. 10). All who are friends of the Jewish people can rejoice with Israel’s capital city.

Especially significant is the declaration, “I am the LORD, your Holy One, Who has created Israel, your King” (43:15). In this verse in the Hebrew text, the word “boreh” is used for “create.” The same word is used for the creation of the universe. Israel is, in fact, a specific, purposeful creation by God, the King.

“The people shall dwell alone and shall not be reckoned among the nations” (Num. 23:9). “Blessed is he that blesses you and cursed is he that curses you” (24:9). Individuals as well as nations should consider this offer of a decisive principle of blessings.

“Since you were precious in My eyes, you have been honored and I have loved you: therefore will I give men for you, and nations for your soul. Fear not, for I am with you; I will bring your seed from the east, and gather you from the west. I will say to the north, ‘Give them up!’ and to the south, ‘Do not withhold! Bring My sons from afar and My daughters from the ends of the earth” (Isai. 43:4-6). 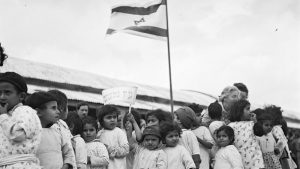 Jewish children from Yemen in immigrants’ camp in Rosh Ha’ayin circa 1950. (Israel GPO)

The Prophet Ezekiel also declares it: “Thus says the Lord GOD; When I gather the House of Israel from the people among whom they are scattered, I will be sanctified through them in the eyes of the nations, and they will dwell on their land that I gave to my servant Jacob. They will dwell on it in security and build houses and plant vineyards” (28:25-26).

The Jewish homeland, renamed Palestine by the Roman occupier Caesar Hadrian out of hatred against Judea and Israel (although the Philistines hadn’t existed for centuries already), yielded no fruit to its occupiers be they the Greeks, Romans, Persians, various Muslim groups, Crusaders or British. The land remained fallow and empty. Today, the desert is blooming and yields fruit which is exported worldwide. Israel has achieved pre-eminence in the scientific fields and is quoted uninterruptedly by the news media.

Along come the misguided replacement theologians, who want to discredit the belief that Israel today is fulfillment of prophecy. These skeptics claim the prophesied return of the Jews already took place when the exiled Israelites returned from the Babylonian captivity. Suffice it to say that it is a false reading by them. According to Ezekiel 39:28 all the Israelites would have had to return home and God would “not leave any of them there.” Only a fraction of them, just 50,000, returned in 538 C.E., however. Most stayed in Babylon. We also read above that Israel would return home from all directions and nations. This only took place in our days. Today, Israel’s more than nine million residents include the largest Jewish population in the world.

Another matter of contemporary relevance: In Judea, Samaria and the Jordan Valley–entirely within ancient Israel–there are Jewish communities with nearly 500,000 Jews. Israel now wants to apply sovereignty to these communities. This is nothing new as the residents pay taxes in Israel, receive water, electricity, garbage-collection service, are served in every respect like Israelis. The position of the borders themselves would have no impact on their lifestyle. Here, likewise, there has never been a Palestinian state. There is no annexation when the land is yours. It means, rather, that the residents would now live under civilian rule rather than military rule. But almost all the world yells against it. These nations are working against God and His clearly recorded Word! Why? Because the enemy battles unceasingly against whatever happens on behalf of Israel or in fulfillment of biblical prophecy.

Heavenly bodies and the sea as guarantor for Israel

There are Christians who claim God has abandoned Israel and that they themselves have inherited Israel’s chosen position. But what does the Bible say? “Thus says the LORD, Who gives the sun for a light by day and the ordinances of the moon and the stars for a light by night; Who agitates the sea so its waves roar; The LORD of Hosts is His Name: If these ordinances depart from before me, says the LORD, then the seed of Israel also shall cease from being a nation before me forever. Thus says the LORD; ‘If heaven above can be measured and the foundations of the earth plumbed out beneath, I will also cast off all the seed of Israel for all they have done, says the LORD’” (Jer. 31:34-36 [35-37]).

More today than ever before, the world is trying to hinder the enormous rebuilding and return of Israel in its own land. But God’s Word says, “If any of you are driven out unto the outmost parts of Heaven, from there will the LORD your God gather you and from there will He fetch you. And the LORD your God will bring you into the land which your forefathers possessed and you shall possess it; He will do good to you, and multiply you above your forefathers” (Deut. 30:4-5).

Our dear Christian readers will recall that Jesus prayed, “Sanctify them through Your truth: Your Word is truth” (Jn. 17:17). And all of us will surely agree, “For the word of the LORD is upright, and all His works are done in faithfulness” (Ps. 33:4).

Next Good news vignettes to inspire those who love Israel