The prospects for peace 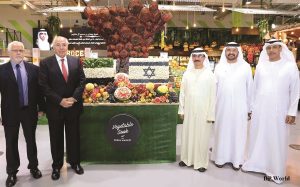 Just over two years ago, Israel signed the Abraham Accords with Bahrain and the United Arab Emirates (UAE). Mediated by the United States during the Donald Trump presidency, these historical accords normalized relations between foes and set the stage for further Arab and Muslim-majority states to join. Many sensed the time was ripe for far-reaching regional peace. Has the reality today measured up to earlier expectations?

The reality is a mixed bag. Business and tourism between the above signatories to the Accords has flourished. Israel has a free-trade agreement with the UAE. Bahrain and Israel are in the process of negotiating a free-trade agreement. Trade is, however, mostly one way, that is at Israel’s initiative.

Tens of thousands of Israeli tourists have thronged to the Emirati desert tourist hub Dubai, as well as to the capital Abu Dhabi. Dubai boasts nine kosher restaurants and food venues. Emirati and Bahraini visitors to Israel, however, number far fewer.

Defense contacts have also been made between Israel and the Gulf signatories as Iran is viewed as the biggest military threat in the region. Israel’s expertise in anti-missile and anti-drone defense is especially sought after.

Senior presidential aide to President Donald Trump and chief negotiator for the Accords, Jared Kushner, recently revealed that up to six additional nations (unnamed) were involved in negotiations to join the Accords. Indonesia and Mauritania were rumored to be among them. Strong US backing, economic and military incentives, by the ultimate dealmaker Trump, was fundamental to creating interest to join. Also key was Trump unlinking normalization from progress on the Israeli-Palestinian conflict.

Trump’s roughshod approach broke through the logjam. It disabused the European-coddled Palestinians and their closest supporters of the belief that they could get what they wanted through continued stubbornness. Trump’s message: “Move forward with us or get left behind.”

The cherry on the cake would have been Saudi Arabia. Rumors swirled the Saudi regime might be ready to join the process. It was thought that shared regional security concerns, i.e. the threat posed by Iran, might prompt a quick Israeli-Saudi agreement. But Saudi normalization has proven to be elusive.

Why did the Saudis balk? Enthusiasm waned the moment Biden became president. Two reasons: Under US President Joe Biden, the USA took on a particularly anti-Saudi tone due to the regime’s involvement in the killing of journalist and dissident Jamal Khashoggi. The Biden Administration alienated the critical economic and military Gulf ally by making it a pariah state.

A second reason was the questionability of the USA as a dependable strategic ally, fueled mostly by Biden’s headlong charge to rejoin the Iran nuclear deal despite Saudi objections. Also, the lack of American support for the kingdom’s position on the war in Yemen left the Saudis feeling abandoned. Finally, the USA’s disastrous retreat from Afghanistan reflected weakness in Biden’s leadership, confusion and a lack of American commitment.

Current US rapprochement with the Saudis was motivated primarily by domestic American political concerns–i.e. Biden’s sinking popularity. He hoped to coax the Saudis to pump more oil, thus decreasing the price of gasoline. There was minimal emphasis on joining the Accords, though the Gulf Kingdom did open its air space to Israeli commercial flights. Riyadh officials are now insisting a two-state solution to the Israeli-Palestinian conflict must come before normalization, a linkage Biden is only too willing to make.

Despite officially endorsing the Abraham Accords, the Biden Administration has pursued a foolhardy policy to undo anything positive associated with the Trump
presidency. As a result, there have been no bold initiatives by Biden to follow up the Accords. The Democratic-led US Congress and Senate, as well as the majority left-leaning media, gave a tepid “hurrah” to the Accords and barely mentioned or acknowledged them again so as not to give any credit to the man they reviled most, former-president Trump.

As a result, one of the most promising Middle East peace initiatives in decades was left to languish, sacrificed for petty domestic political purposes. The momentum to join the Abraham Accords has ceased. In fact, the Biden Administration pressured Israel to not move ahead with normalization with Sudan after the military coup in the African nation.

On various policy matters regarding the Middle East, Biden has chosen to shift gears into reverse from the Trump period. Despite Biden’s claims to the contrary, the USA is incrementally walking back Trump’s recognition of Jerusalem as Israel’s capital city. Incredibly, the USA sought to open a US consulate in Jerusalem, Israel, for the Palestinians, but relented after intense Israeli objection.

An overseas American in Israel requiring consular services, passports and the like, will not find Jerusalem listed under cities of Israel on the US State Department’s website, only Tel Aviv, even though the US embassy is in Jerusalem. Instead, “Jerusalem” is listed incorrectly under “countries,” suggesting it is not a part of Israel, but some separate entity. It is a subtle form of rejection of Israel’s claim and, of course, Trump’s recognition.

The Biden Administration will leave its own mark on the Middle East by doggedly turning the clock back by 1) reviving a nuclear deal with Iran, despite its daily genocidal threats to destroy Israel; 2) endorsing a moribund two-state solution for the Israeli-Palestinian conflict; 3) making further Israeli normalization with Arab states subject to progress on the Israeli-Palestinian conflict; 4) diluting American recognition of Israel’s capital Jerusalem; and 5) enabling the radical Islamist Taliban to return to power in Afghanistan. While the Biden Administration tends to boast of its progressiveness, this administration has been decidedly regressive on Middle East peace and regional security. 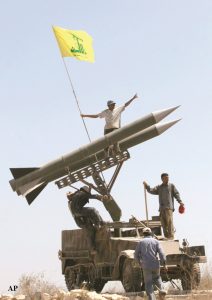 At the time of writing this, Israel has finalized an agreement with Lebanon on maritime borders brokered by the USA. Not a normalization of relations, the goal is limited to neutralizing a potential flashpoint: To settle a dispute over extraction rights to large offshore natural gas fields in the Mediterranean Sea.

It remains to be seen whether Iran ally and terrorist organization Hizbullah will respect such an agreement in the long term. As a major government player in Lebanon, as well as having a militia with a formidable arsenal of rockets, it is capable of politically and militarily scuttling any such settlement. Either way, Hizbullah remains an implacable enemy of Israel and has repeatedly threatened to attack Israeli offshore drilling platforms. For now, it is biding time since it cannot be seen as opposing a deal that will help Lebanon, currently in shambles economically and politically.

In the decades since the signing of the first Oslo Accord in 1993, Israel has made numerous offers (all rejected by the Palestinian leadership) to achieve a final peace agreement with the Palestinians, some even incorporating a division of Jerusalem. Besides ending belligerency, those offers were backed up by tangible concessions at great cost to the nation: Lopsided prisoner exchanges; giving up land; permanently evacuating settlements, uprooting 10,000 Jewish residents in the process; freezing settlement building on several occasions.

The Palestinians had obligations that were much less demanding and less costly, besides of course, also ending belligerency. They were to end incitement to terror. For example, they were expected to rewrite schoolbooks that praised terrorists or called for Israel’s destruction. Such measures are necessary for creating an atmosphere conducive to peaceful co-existence. Without that, there is no hope for lasting peace.

But even the easiest and cost-free obligation (since the Americans and Europeans were funding the Palestinian education system) was never fulfilled. Incitement to terror exists throughout the Palestinian Authority (PA) territories, in schools, mosques, broadcasts or even in the public streets. After 30 years, hatred for Israel and praise for efforts to destroy it, are the standard.

In a study by the Israel Hayom newspaper and the public-policy research institute IMPACT-SE (Israel Hayom, September 7, 2022), Palestinian school books were found to endorse terrorism. In both PA schools and schools run by the United Nations through its refugee agency UNRWA, history books for grade 11 portray the 1972 massacre of 11 Israeli athletes at the Munich Olympics as a positive and legitimate event.

Parroting the motifs of the Nazi Reich Minister of Propaganda Joseph Goebbels, Jews are portrayed according to classic anti-Semitic stereotypes–as racists and sexual predators, controlling the media, the banks and the world. They are the enemies of Islam for all times. In recent years, there has been a radicalization of the anti-Jewish themes in Palestinian school books in all subjects for all age groups, including encouragement of jihad and violence against Israel and against Jews.

Germany is the main financial sponsor of the Palestinian educational system, supplier of the schoolbooks. Other significant sponsors are Finland, Ireland and Norway. When asked by the researchers about the situation, the German Representative Office in Ramallah admitted they do fund the Palestinian education system but denied funding the development of schoolbooks. Such 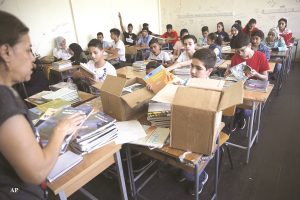 hairsplitting is meaningless considering financial fungibility. The Germans added that they are in constant dialogue with the Palestinians concerning improving their educational materials. This dialogue has become a 30-year plan with no change in sight. The fact remains, the Germans and their European partners are funding an educational system that perpetuates extremist Jew-hatred and incites to violence.

This is the groundwork upon which Germany, Finland, Ireland, Norway and much of the European Union want to establish peace and, of course, based upon a two-state solution. Also, Biden has resumed funding for the Palestinians and UNRWA that President Trump suspended. With such sponsorship, the future the Europeans and the USA guarantee is one of continuation of terrorism, of war.

The prospects for peace are not encouraging. Hope and optimism easily change due to elections, leadership changes, even the whims of steady leaders. Peace cannot be imposed by a leader. If a population is taught to hate, the peace will crumble. As the quote from the Psalms at the beginning implies, pursuing peace necessitates turning from evil.

I am, though, optimistic about peace for a different reason–as a matter of faith. A permanent peace comes only from a permanent source, from God, not transitory leaders or generals, mere men. That is why we pray in the synagogue service daily, “May He Who makes peace in heaven, make peace over us and over all Israel.”

Previous The good that Israel does

Next THE WORD – not words