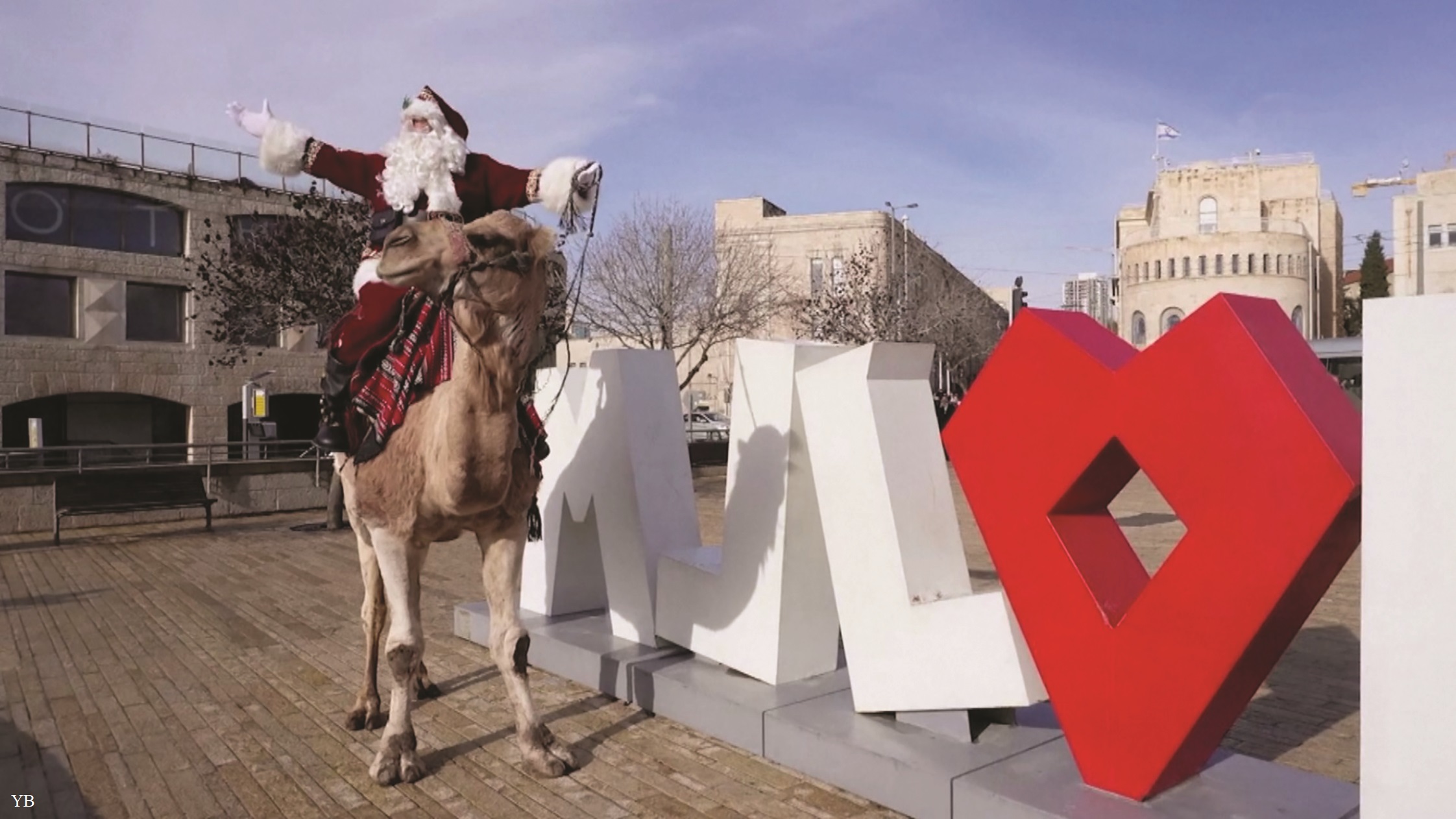 For believers, Christmas is the joyous season when the words of the angel are proclaimed, “I bring you good tidings of great joy for all the people” (Lk. 2:10), referring to Jesus’ birth. Last Christmas that meant good tidings for all except Israel. In fact, it was a Christmas ambush.

Instead of preaching the season’s good tidings, the patriarchs and heads of various Jerusalem churches launched a broadside against Israel in a joint statement (December 13, 2021), specifically against radical groups, rightwing, settler-type Israelis, who they claimed were driving Christians from the Holy Land.

In a second and third barrage, successive columns appeared in the British press, The Daily Telegraph (December 18, 2021), by the Roman Catholic Church’s Custos of the Holy Land Father Francesco Patton, and The Sunday Times (December 19, 2021), by the Church of England’s Archbishop of Canterbury Justin Welby and the Archbishop of Jerusalem Hosam Naoum, lamenting a “concerted attempt to intimidate and drive away” Christians.

Patton’s piece appeared under the inflammatory headline, “Holy Land Christians are at threat of extinction.” Welby and Naoum critiqued Israel’s security barrier, built to stop terrorists, for isolating Christian villages and contributing to the exodus.

And not to pass over the Orthodox Christian Christmas, which fell on January 7 this year, the Greek Orthodox Patriarch of Jerusalem Theophilos III, in a column in The Times (January 8, 2022), denounced “Zionist extremists” who threaten the Christian presence.

This quartet of attacks on Israel came at the very moment when much of the world’s attention is focused on Bethlehem, on Nazareth, and the Holy Land in general, due to Christmas. It is hard to believe this was not an orchestrated action, designed for maximum international impact. Israeli political and religious leaders reacted with shock to this wide-reaching campaign to incite anti-Israel sentiment.

How true are the charges?

There are radical Jews who desire that Christians leave Israel because they consider them a threat. Two thousand years of Christian anti-Jewish history, often violent, is not easily undone. A proverbial handful of Jews may actually act upon that desire. But Israel has laws that protect religious minorities and punish illegal acts of harassment. Israel enforces the laws and prosecutes accordingly.

Also, leaders of the Haredi (ultra-Orthodox) community have issued statements against ill-behaved, “irresponsible youths,” who engage in shameful acts, vandalism, towards members of other religions, and declared such behavior a Chillul Hashem–a desecration of God’s Name. They’ve called upon rabbis, teachers and parents to act to stop this behavior.

The reality is most Israeli Jews view Christians, in particular Evangelicals, as friends due to their support for the State of Israel. Even Haredi Jews are aware of this. An increasing number of Orthodox rabbis in Israel are involved in efforts to improve Christian-Jewish relations, engaging in respectful theological discussions and educational forums with their Christian counterparts. One local Orthodox institution even has a program to distribute food packages to needy Arab Christians in Bethlehem–in the Palestinian Authority!

But are Christians really fleeing Israel due to Israeli threats? Are they on the verge of extinction as claimed? To the chagrin of the aforementioned critical church leaders, the Central Bureau of Statistics in Israel published a report on December 22, 2021, that the Christian community in Israel was actually growing–1.4 percent in 2020–and 84 percent of that community expressed satisfaction with life in Israel.

The verbal ambush of Israel by church leaders reminds of other fabricated charges, namely apartheid and genocide. Despite the evidence of a UN Human Development Index (quality of life) rate among Palestinians that is higher than in most Arab states, as well as fast population growth, anti-Israeli activists and boycott proponents continue to tout these fake charges.

Why would church leaders misrepresent the truth?

The truth is Christians do face extinction, just not in Israel. Throughout the Middle East, Africa and Asia, Christians in primarily Muslim states have been under attack from radical Islamists (sometimes even under “moderate” regimes), in particular in the last two decades, in Bangladesh, Egypt, Iran, Iraq, Jordan, Lebanon, Nigeria, Sudan, Syria and elsewhere. Large, ancient Christian communities have dwindled. Thousands of Christians are massacred, raped, sold into slavery, forced to convert to Islam yearly. Churches are destroyed. Millions of Christians have been uprooted. Critics of government policy are arrested, tortured and often disappear. But not in Israel!

In a 2019 report commissioned by British Foreign Secretary Jeremy Hunt, the pervasive persecution of Christians worldwide is described as sometimes amounting to genocide. The report finds that 80 percent of persecuted religious believers in the world are Christians. Just as Israel is threatened with extermination by radical Islamists, so too are millions of Christians in the region.

Churches (particularly Roman Catholic, Coptic and Greek Orthodox) and international Christian organizations (such as World Vision) that operate in Israel or the Palestinian Authority are also often closely linked with affiliate branches in Muslim countries throughout the region. A wrong word in Jerusalem from church leaders can have disastrous effects on Christian minority communities far away.

The delicate balancing act to survive, to maintain their institutions and constituents, or what is left of them in the region, motivates some church leaders to criticize Israel. It’s an attempt to ingratiate themselves with those who hold a sword to their necks figuratively and sometimes literally.

A tradition of self-preservation

This is what happened during the Shoah, the Holocaust. Many acknowledge the failure of church leadership, in particular the Vatican, in its assumed role as God’s moral authority on earth, to publicly and forcefully condemn the Nazi persecution of Jews. Fearing Nazi retaliation, the church abdicated its noble role to become instead the “Self-Preservation Society” (I’m misappropriating the lyrics of a 1960s song). What happened to the virtuous biblical principle, “You shall not stand idly by the blood of your neighbor” (Lev. 19:16)?

The individuals and individual churches who acted at their own risk to save Jews were, unfortunately, the exception, not the norm. Self-preservation trumped morality. In general, the church behaved no differently than any secular institution.

For example, Italian media reported on December 10, 2021, that published documents seem to confirm long-standing allegations that former Prime Minister Aldo Moro signed a deal in 1973 with the two Palestinian terrorist organizations, the PLO and the PFLP. According to the deal, the government granted the Palestinians carte blanche to attack Jewish and Israeli targets in Italy in exchange for immunity for domestic and overseas Italian interests.

As a manifestation of that policy, the Italian government knowingly failed to prevent the 1982 Palestinian attack on the Rome synagogue that killed a two-year-old and wounded 34 despite intelligence warnings beforehand. Jews were not deemed real Italians and, therefore, became legitimate targets, sacrificed in exchange for Italian security.

Jews were easily sacrificed in order for institutions, churches and governments to survive or be left alone. Policy based upon self-preservation is nothing new. We may expect secular institutions to function on this basis. Our expectations of religious authorities claiming a biblical mandate, professing they operate according to biblical principles, are higher.

The unjust Christmas ambush by the Jerusalem church leaders and their British colleague sacrificed Israel. The misrepresentation of Israel as culpable for a non-existent Christian exodus may seem a small price to pay for their goal of preservation of a church under Islam. But by targeting Israel with inflammatory rhetoric, they have done tremendous harm. The pastors have misled their sheep worldwide. Worse, they have emboldened the haters of Israel, adding grist to the mill for the delusional Israel boycotters and apartheid- and genocide-accusers. They have done a great disservice to Christian-Jewish relations in their assault on the only democracy and safe haven for Christians in the region.

Thankfully, in place of those who abdicated their holy positions, there are other Christians who stand with Israel, pray for it and bless it. These are the ones who will receiving blessing by the true Preserver of peace and security.