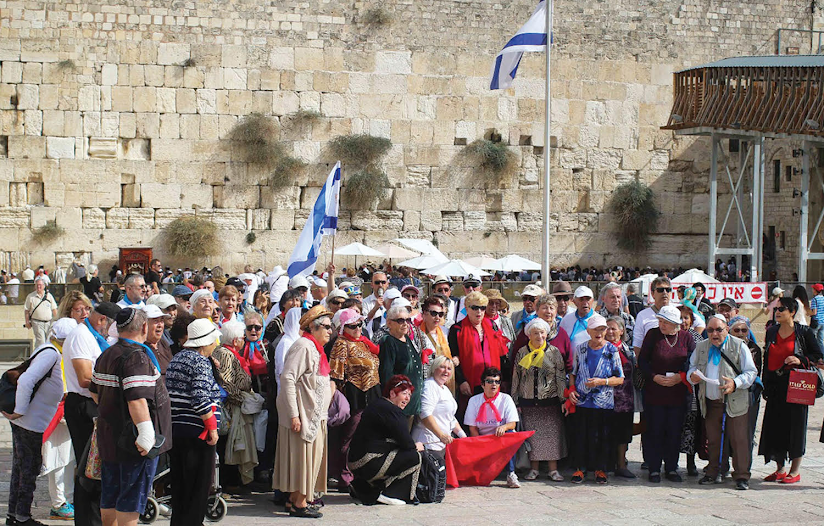 Israel’s rebirth as a state on its own land after 2,000 years is a 70-years’ miracle. The Prophet Isaiah said it over 2,800 years ago: “Who has heard such a thing? Who has seen such things? Shall the earth be made to bring forth in one day? Or shall a nation be born at once? For as soon as Zion travailed, she brought forth her children” (66:8).

When I read about this miracle in various translations in other languages, the negative opinions of the translators are already apparent. I am also aware of the differences between various Christian denominations, which lead to the lack of understanding of a never-before-seen miracle.

First the land was negated. Out of revenge, the Roman Caesar Hadrian, whose armies occupied Israel and Judea in the second century, erased the name of the land. He renamed it Palestine after a region of the Philistines, who hadn’t existed for 600 years already. Its capital city, Jerusalem, was renamed Aelia Capitolina. Jews were forbidden from entering the city. The name of a non-existent nation of Philistines would be used until the 20th century.

The Jews who remained in the land were called Palestinians. Until 1948, a hospital, other institutions, and newspapers, such as The Palestine Post (today The Jerusalem Post), used variations of Palestine in their name. When the state was established, that practice ended.

The Muslims refused every Palestinian label, denouncing each one as Zionist. They themselves were descendants of the neighboring Arab nations, after all, where they have family and connections to this day. Only in the 1960s did they begin calling themselves Palestinians and declared themselves descendants of the Philistines, an absolute historical falsification. That the extinct Philistines were not Arabs, but a seafaring people of European origin, is ignored to this day. They lived in a region along the Mediterranean Sea, but had no independent state.

Since Israel has been reestablished as a state, nation and people, its enemies have attempted to negate its existence. There have been detractors such as those who claimed the Jews of Europe were actually Khazars (from Eastern Europe and Central Asia) who converted. Others claimed the Danes and Britons were tribes of Israel, or even declared that 10 Tribes were lost. Such speculators ignore that even if some Khazars did convert, that was already a practice in biblical times, and every convert was as much a Jew as Moses or Aaron. If anti-Semites, out of envy, now refuse to recognize the Jews, they should recall that persecutors of the Jews, even Hitler, somehow always managed to find their Jews. Shouldn’t that have ended with the Holocaust, the greatest racist crime against humanity in the history of mankind?

Another repudiation of the Jewish people occurs in the minds of Christian proponents of replacement theory. They call themselves the new Israel. Whatever New Testament verses they manipulate for themselves, even King David warned about the attacks to undermine the Jewish people (Ps. 83:3-5 [4-6]). It is an attempt to rob Israel of its rights, to eradicate it as a people.

There have also been resolutions by the anti-Semitic United Nations against Jerusalem as the capital of Israel, against the building of homes in Jerusalem, against the cultivation of the land, against more and more, dozens of hypocritical UN resolutions against Israel each year. The UN seems not to have any time for the suffering Christians and other persecuted groups under Islamic dictatorships. The enemy of our souls hates the Jews because God’s messages, and salvation for all the world, have come through this nation.

But let us examine the joyful side–God’s Word, which guarantees, “Behold, He that keeps Israel neither slumbers nor sleeps” (121:4). The land and the people were reborn as the Jewish state in 1948. It will never cease to exist!

“Fear not, for I am with you: I will bring your seed from the east, and gather you from the west. I will say to the north, ‘Give up!’ and to the south, ‘Keep not back!’ Bring my sons from afar and my daughters from the ends of the earth” (Isai. 43:5-6).

“‘For behold, days are coming,’ says the LORD, ‘when I will bring again the captivity of My people Israel and Judah,’ says the LORD: ‘and I will return them to the land that I gave to their forefathers, and they shall possess it’” (30:3).

“Thus says the LORD, ‘The people which survived the sword found grace in the wilderness, when I led Israel to its place of rest….You will yet plant vineyards upon the mountains of Samaria: the planters will plant, and will eat them….Arise, and let us go up to Zion to the LORD our God….I will bring them…from the coasts of the earth,…a great company will return here….[F]or I am a Father to Israel….Hear the word of the LORD, O nations, and declare it in the far off isles, and say, He that scattered Israel will gather him, and keep him, as a shepherd does his flock….And they will come and sing joyously on the height of Zion….[F]or I will turn their mourning into joy, and will comfort them, and make them rejoice from their sorrow….And there is hope in your future,’ says the LORD, ‘and your children will return to their own border’” (31:2-13, 17 [1-12, 16]).

“Thus says the LORD GOD; When I gather the House of Israel from the peoples among whom they are scattered, then I will be sanctified in them in the sight of the heathen, then they will dwell in their land that I gave to my servant Jacob. And they will dwell there safely, and will build houses and plant vineyards and will dwell in security, when I execute judgments upon all those who despise them round about; and they will know that I am the LORD their God” (Ezek. 28:25-26).

“Thus says the LORD GOD; Behold, I will take the Children of Israel from among the heathen, to which they have gone; I will gather them on every side, and will bring them to their own land” (37:21).

“And I will bring again the captivity of My people of Israel, and they will rebuild the waste cities,…they will also cultivate gardens and eat their fruits. And I will plant them upon their land, and they will never again be uprooted from their land which I have given them, says the LORD your God” (Amos 9:14-15).

Four prophets used very similar words. It should suffice. I witness it with my own eyes, no longer living as one of the remaining Jews in the Galut (Dispersion). Israel today has the largest Jewish population in all the world. None needs to be a “wandering Jew” or stateless.

Israel is a nation of readiness to help, remarkable innovations, world-leading technology and start-ups, with the strongest military power in the Middle East–but above all Israel is the steward of the land that belongs to God, and its capital for over 3,000 years has been Jerusalem, God’s earthly dwelling place. The land and people of Israel: The greatest miracle of the past 70 years, visible evidence of the Eternal, Faithful God!

Next “Whoever hits you on the right cheek…”