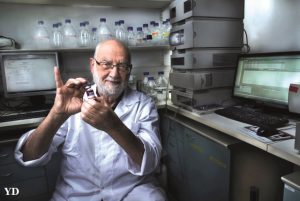 A new cancer-killing medicine, developed in Jerusalem, has passed the scrutiny of the US Food and Drug Administration (FDA) and been approved for use. With the unwieldy name Doxorubicin-HCI Liposomal Injection, it is a modified chemotherapy medicine for the treatment of ovarian cancer, multiple myeloma and Kaposi’s Sarcoma.

It is significantly less expensive, hence more accessible, than other chemotherapies. What is unique, however, is that it targets cancer cells directly, avoiding killing healthy cells. This reduces the usual side effects associated with chemotherapy: hair loss and gastrointestinal problems.

Prof. Yechezkel Barenholz, Doxorubicin’s inventor, is a leading expert in medical biochemistry and nanotechnology, author of 420 scientific and medical journal papers, and owner of 55 patents. The company he founded, Ayana, is in Jerusalem. 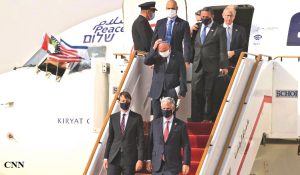 The friendlier relations between Arab countries and Israel are in evidence above the clouds. Saudi Arabia is permitting use of its airspace for flights to or from Israel. Recently there have even been flights between the two countries (The Jerusalem Post, October 27, 2021).

An alliance between the space agencies of Israel and the United Arab Emirates is planning a joint space mission to the moon (Times of Israel, October 20, 2021).

In the meantime, an Israeli Embassy was opened in Bahrain in October. Also, though still controversial, over 300 prominent Iraqis have called for full diplomatic relations with Israel (Times of Israel, September 24, 2021).

“Maybe we have differences, but the commonalities are so much stronger,” he added. “The color of blood doesn’t distinguish between Arab or Jew.”

In Tel Aviv, the recently appointed director of the prestigious Breast Surgery Center at Sourasky Medical Center-Ichilov Hospital is a renowned surgeon, Dr. Marian Khatib. A Muslim Arab, she is a 40-year-old mother of two, raised in an Arab village near Acre. Khatib explained: “I was educated [to believe] if you work hard, you will go far….The fact that I was a woman from a conservative Muslim society was not a barrier to me at any stage….I am excited to enter one of the most coveted positions in public medicine….This is a dream come true” (The Jerusalem Post, October 17, 2021). 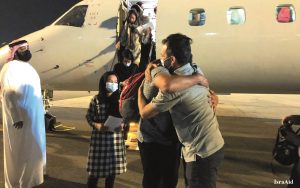 After the US pullout from Afghanistan, thousands of lives were in danger. The Israeli charity IsraAID airlifted two groups of Afghani policewomen, judges, activists, translators, female athletes and their families, 125 persons in all, to a neighboring country, saving them from likely death. Canadian-Israeli Jewish real-estate developer Sylvan Adams funded the secret missions. The US news giant CNN reported about the operation with rare praise, calling it a “daring rescue” (https://unitedwithisrael.org/cnn-applauds-israel-for-rescuing-afghans-from-taliban/).

Next Israeli air force and German Luftwaffe over Jerusalem