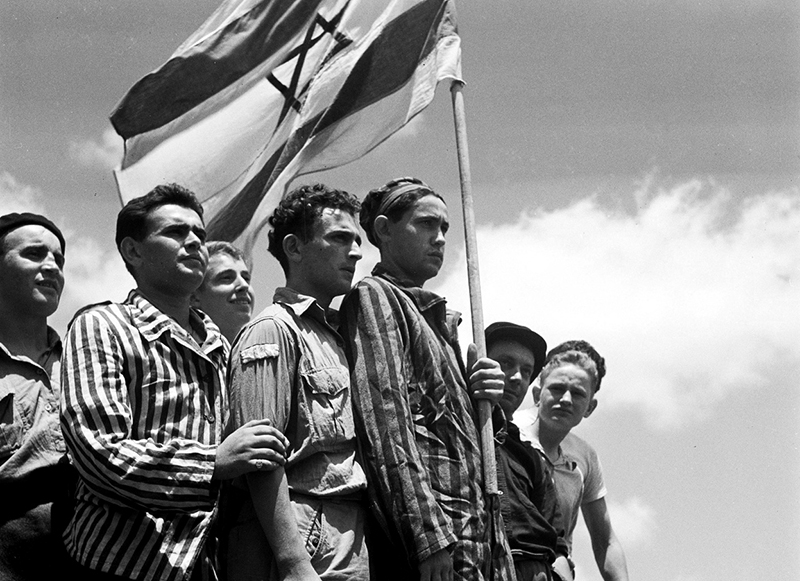 In part two of this series on biblical end-time prophecy, we will look at several examples dealing with Israel’s restoration. These will help us understand current and future events, clear up common misconceptions, and will challenge “politically-correct” thinking.

Two important signs of the end time mentioned in the Bible are 1) the return of the Jewish people to the land of Israel, and 2) the blossoming of that desolate land. Israel’s failure to abide by the commandments of God had brought divine judgment, roughly 2,000 years of exile, and a land (previously described as flowing with milk and honey) turned to desert. That starkness also came upon the conquerors of the land: “I will make the land desolate; and your foes who dwell upon it will be desolate” (Lev. 26:32). None achieved a permanent foothold or prospered long term.

Several prophets refer to the future revival of vegetation, the irrigation of the land, the resumption of agricultural activities, and abundant harvests when the Jewish people return. One is Ezekiel.

In chapter 36, God speaks directly to the Land of Israel: “But you, O mountains of Israel, will give forth your branch and bear your fruit for My people Israel, for they are soon to come” (v. 8; emphasis added). The land of Israel blossoms when the Jews return, but not for the conquerors. Besides a sign of the end time, this development is a confirmation of rightful ownership of the land and a sanctification of God’s holy Name.

The miraculous spectacle of the land of Israel blossoming anew is God’s seal of approval on the Jews’ return and on their rightful possession of the land over all others.

The opening verses of this chapter mention God’s anger with the nations who have taken the land of Israel from the Jewish people and haughtily claim it as their own. The miraculous spectacle of the land of Israel blossoming anew is God’s seal of approval on the Jews’ return and on their rightful possession of the land over all others.

This type of divine imprimatur reminds us of the time when Aaron’s staff blossomed and bore fruit. That wonder confirmed him as the rightful High Priest, negating the challenge by Korah, Dathan, Abiram and their rebellious band.

The revitalization of the land and the return of the Jews have an additional purpose: These events sanctify God’s holy Name, reversing the desecration caused by the nations’ mockery of God by not keeping His people in His land (see vv. 20-24).

We have dealt with Zechariah’s prophecy (13:7-9) concerning the destruction of two-thirds of the Jewish people before, as well as the popular Christian misconception that this prophecy remains to be fulfilled in the future. We demonstrated that this prophecy was fulfilled under Roman oppression 2,000 years ago and that it does not apply to the future.

Here in Ezekiel 36, we find further proof: “For behold, I am with you; and I will turn to you, and you will be tilled and you will be sown. I will make people numerous upon you–the entire House of Israel, all of it; the cities will be inhabited and the ruins will be rebuilt. I will multiply man and animal upon you, and they will multiply and be fruitful; I will make you inhabited as in your earlier times, and I will make it better than it was at your beginning; then you will know that I am the LORD. I will cause man to walk upon you–My people Israel–and they will inherit you. Then you will be theirs for a possession, and you will no longer be bereaved of them” (vv. 9-12).

Zechariah’s prophecy concerning the destruction of two-thirds of the Jewish people was fulfilled under Roman oppression 2,000 years ago and does not apply to the future.

The Hebrew word “leshaklam” in verse 12 means “be bereaved of them.” The primary use of the word (or its root sh-k-l) is in the context of a mother who loses her children through death. Comparing the land of Israel to a mother, our text in Ezekiel, however, says when the Jews return, the land will not lose her children again (as it did during the Babylonian or Roman conquests).

If two-thirds would be killed, as some suggest, that would again leave the land of Israel bereft of the majority of its people–it would be another Holocaust with just a remnant surviving. The Bible, however, explicitly says that will not happen.

Persecution During Exile not Ingathering

Another reference in Ezekiel sheds light on Zechariah’s prophecy. As the Babylonian invasion neared, Ezekiel was told by God to perform symbolic acts (5:1-4). He was to cut his hair and beard and to divide the cuttings into three portions. One third he was to burn. One third he was to chop up with his sword. One third he was to scatter to the wind. The meaning was this: “One third of you will die by the plague and be consumed by the famine in your midst; one third will fall around you by the sword; and one third I will scatter to every direction, and I will unsheathe the sword after them” (5:12). Like Zechariah, Ezekiel speaks of two-thirds being killed.

When does this occur? The terrible slaughter that was foretold by Ezekiel occurs at a time when the Jewish people are scattered. It was fulfilled a short time later, when the Babylonians invaded and caused the first exile.

One should understand Zechariah’s post-Babylonian prophecy similarly, that is, as occurring when they are scattered again. And, as we have shown in previous editions of HASHIVAH, exactly that happened again under Roman oppression. Two terrible devastations of the people; each occurrence associated with an exile.

Though future apocalyptic wars are prophesied for Israel, God will fight for Israel and shelter His people.

Today, we are witnessing the ingathering and its ongoing fulfillment. Almost one half of all Jews have returned to Israel. Israel is an agricultural wonder, exporting produce, related technology and know-how all over the world. Across all Israel, the former desert now blooms, confirming that this return is indeed God’s doing. Even the Negev is dotted with farms and vineyards. The meaning of Ezekiel’s prophecy in chapter 36 is unmistakable. Now that this God-ordained return is taking place, the Jewish people will not be decimated again.

Unfortunately, due to faulty Bible exegesis and ignorance of the Hebrew text, some will continue to teach a future Holocaust of the Jewish people. They are misapplying Zechariah’s prophecy and placing him in direct disagreement with Ezekiel. Such contradictions cannot exist in the Word of God. It is time to throw this idea into the trash bin. It is not found in the Bible.

Would God Expel the Palestinians?

A spate of books by popular Christian proponents of replacement theology, written to counter Christian Zionism, make the claim that God would not establish the Jewish state by displacing another people, namely the Palestinian Arabs. That would be unjust, they say. This is a humanitarian argument.

It is odd. These authors would have no compunction about stating that God expelled the Jewish people from the land of Israel because of sin–and not just once, but twice. I suppose God only expels Jews?

So what of God’s principles? Recall what God said to Israel: “All that devour you shall be devoured, and all your adversaries, every one of them, shall go into captivity; and they that spoil you shall be a spoil, and all that prey upon you will I give for a prey” (Jer. 30:16). This and other biblical references state unambiguously that what Israel’s enemies do or plan against Israel will come back upon those same enemies.

Despite the prevalent depiction today of Palestinians as victims, they were ac-
tively involved in aggression against the Jewish community of Palestine in the pre-state period, during the War of Independ-ence and thereafter. Massacres of Jews, expulsions, pogroms and terror attacks were instigated by Palestinian-Arab leaders and carried out by the people. During World War II, they openly sided with Hitler and, with few exceptions, supported the Arab states that attacked Israel one day after its declaration of independence. In 1948 and again in 1967, Arab leaders promised genocide against Israel. The Palestinian Arabs viewed themselves as soon-to-be benefici-aries of confiscated homes and property of the displaced Jews.

The results of both wars were different than hoped for by the Palestinians, than boasted by Arab leaders. In view of God’s promise to Israel, it could certainly be said that the Palestinians reaped what they sowed.

What of the displacement of the Palestinians? Would a just God reconstitute the Jewish nation on its ancient land at the expense of the others who now live there? “Thus said the LORD: Concerning all My evil neighbors who touch the inheritance that I have caused My people Israel to inherit: Behold, I will uproot them from their land, and I will uproot the House of Judah from among them. And it shall be that after I uproot them I will pity them again, and I will return each man of them to his heritage and each man to his land” (Jer. 12:14-15; emphasis added).

God refers to Israel, more specifically Jerusalem, as His dwelling place on earth (Ps. 132:13-14). The neighbors could be the immediate nations on Israel’s borders, or they could be all nations on earth, since Jerusalem is the center of the earth and all other nations are placed around it (Ezek. 5:5). They are called evil because they have dared touch the people of Israel’s inheritance, the land (Ezek. 36:12).

Biblical references state unambiguously that what Israel’s enemies do or plan against Israel will come back upon those same enemies.

God uproots the evil neighbors, those nations who dared to touch the land of Israel, and He removes them from Israel. Simultaneously, he uproots the Jewish people from among the nations and brings them back to their land. A transfer takes place. The Jews are transferred from exile to their land Israel and the interlopers are transferred out of Israel. Uprooting suggests an aggressive act by God. It negates the concept of sharing the land (as in the proposed two-state solution).

Encouraged by Arab leaders to temporarily flee the war zone in 1948, so the invading armies could operate freely, roughly 650,000 Arabs fled Israel’s territory. At the same time, over 800,000 Jews were forced to flee Arab countries due to massacres, pogroms and expropriations of Jewish-owned property by Arab regimes. The fact that more Jewish refugees than Palestinian-Arab refugees existed is usually ignored. People don’t realize a population exchange has already occurred. Most Jewish refugees came to Israel. Just as prophesied, populations were uprooted and transferred.

Biblical prophecies shed light upon current and future events. There we can read what God’s will is and adapt to it so we are not in conflict. God will fulfill all. “From the beginning I foretell the outcome; and from earlier times, what has not yet been; but I say and My plan will stand, and I will carry out my every desire….I also spoke; I also will bring it to pass. I have purposed it; I will also do it” (Isai. 46:10-11).

Next The Elephant in the Room