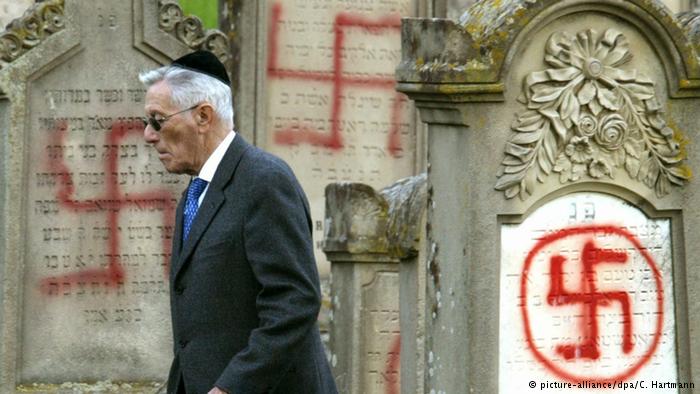 New words, old goal: Jew-hatred, anti-Judaism, anti-Zionism, anti-Israelism, all of it is anti-Semitism. But even more serious: It is literally anti-God!

To say it succinctly and immediately, I encounter a difficulty with the inexactitude of the term anti-Semitism. There are various Semitic peoples that are descendants of Shem, the oldest son of Noah. Yet, this word expresses animosity solely towards the Jews.

I’ll go right to the root: The hatred is against the God of the Jews. This is already proven in the history recorded in the Bible. Nations with other “gods” fought continually against the Jewish people because they honored and loved a different God, the true Creator of Heaven and earth.

Because people opposed to God are unable to attack Him directly, they pursue Israel, God’s own chosen nation. Here is the evident key: “For you are a holy people to the LORD your God; the LORD your God has chosen you to be a special people to Him, above all the peoples that are on the face of the earth” (Deut. 7:6). Reading on, we recognize the faithfulness of God, Who keeps His “covenant and mercy” to the fathers of Israel for a “thousand generations” (v. 9).

Israel takes the brunt of those attacks, but God’s Word says, “O Israel, trust in the LORD: He is their help and their shield” (Ps. 115:9).

When God sets Himself as the shield, the defensive weapon, ahead of Israel, then logically, every attack on Israel is also an attack on God. The naïve aggressors may succeed temporarily, to a certain extent, but sooner or later they will suffer the invincible reaction of the Almighty. The history of the indestructible Jewish people has demonstrated this multiple times.

The enemies of the Jews often disguise their own identity and don’t want their anti-Semitism to appear as discrimination against individual Jews. They therefore create a general characterization of Jews in order to lure as many haters as possible against it. Anti-Semitism–I call it Jew-hatred–has many sides. I want to identify a few of the most striking ones below.

That it clearly concerns the Jews’ faith in God, as I indicated above, can already be seen in antiquity. Consider, for example, the historical times of the Maccabees. The Syrian King Antiochus forbade the Jewish Temple services, the circumcision of boys, the practice of Jewish faith. He murdered Jews because they would not participate in his pagan sacrifices on idolatrous altars, and refused to eat pork.

Under the leadership of a priestly fami-ly, Israel stayed true to faith, expelled the Syrians from the land, and God punished Antiochus with a gruesome death. The Temple was cleansed and sanctified and Israel celebrated for eight days. Our eight-day-long celebration still exists today.

Also the occupation of Israel by the Greeks, and later the Romans, with their respective idols included religious aspects. It was the enemies’ hatred towards the Jews and their God that ultimately led to the repeated destruction of the Temple in Jerusalem.

And how was it during the Middle Ages with the persecution of the Jews by Christians in many lands? Jewish faith was the cause, even though sundry lies against the Jews were fabricated. One of the most naïve was that Jews used the blood of Christian children for their Passover matzot (unleavened bread). Hundreds of thousands of Jews were massacred, even burned by fire, upon church orders at the highest levels. And the Crusaders slaughtered Jews in Europe and the Holy Land. The Jews’ faith in God was the generalized reason of their offense, for which they should pay with their lives.

Even when the persecution of Jewish citizens in Communist Russia began, it was due to their faith, which didn’t fit into the system.

Persecution due to race theory

As religion became less central, another tactic was introduced: race. Originally grouped as swindlers, extortioners, capitalists, or simply dirty ghetto Jews, it was only a short step to the Nuremberg Laws of the Nazis which dealt with the much-reviled Jewish descendancy. The Nazis found references to such evil insinuations and generalizations among thinkers and philosophers in France and Great Britain.

Descendancy was decisive: Jew, half-Jew, quarter-Jew, eighth-Jew. “No Jew can be an ethnic German [Volksgenosse]” was the watchword of progressive Germany at the time. It began once with jokes about Jews and ended with Auschwitz. More than six million victims are ample reminders for us. I know what I am saying–I saw it myself in occupied Poland as a child from age nine to 15 in WWII under SS rule. But at the end of the Third Reich, it became, “Never again!” How often I heard this and wished I could believe it.

Is it really so? At least every European reader can answer it for him- or herself, in particular every friend of Israel who dares, in many a prayer meeting of his or her Christian congregation, to stand and utter a prayer for Israel today. Dare, too, to tell those who object to such a prayer that, by so doing, they are opposing God’s plan of redemption.

The truth is that anti-Semitism in Europe has become so widespread–and not only due to the immigration of Muslims, whose religion calls for the extermination of the Jews–that even in Germany there is no longer any shame in speaking of Israel with contempt.

Accusations of violations of human rights

Anti-Semitism, discrimination, hostility towards Jews, who would say such things? Who would get allies in such utterances? But accusations against the state of Israel for violating human rights are the new tactic of the old Jew-hatred. Do we even need a Jewish state? Its democracy is considered a foreign entity in the Middle East. More and more states declare one doesn’t need a Jewish state; they forget, or don’t care, how the expelled Jews fared without a state. There are over a hundred nations with a Christian majority and over fifty Muslim states, and only one truncated state for the Jews–and the world opposes its existence.

Instead of anti-Semitism or anti-Judaism, one is anti-Israel. That is nothing new at all. Generalization of guilt is attributed to the entire Jewish nation since Israel is accused of discrimination against its Arab citizens. And consider also this: The hostile feelings are not only directed towards Israelis, they are directed against Jews in many nations, expressed brazenly in particular by immigrant-Muslims in those nations.

The fact is, however, and it is confirmed by Palestinian Arabs, that in Israel Arabs have more freedoms and more rights than in any Muslim land. They are students, professors, respected businessmen, doctors, attorneys and judges, even Supreme Court judges, and enjoy all social services just like Jews and Christians in the land. Least credible is the charge of apartheid, which has been rejected as false even by Arabs living in Israel.

The fact that fallacious criticism of Israel is pure anti-Semitism applies to the United Nations as well. Clearly, the state of Israel cannot be immune to criticism, but when over 75 percent of an international body only criticize Israel, while widely-known violations of other nations are barely mentioned, or not at all, then that is anti-Semitism.

A final word about anti-Zionism

I want to close with some thoughts about anti-Zionism. It belongs to the very same group which reflects the old attitude: anti-Semitism. The Jews’ yearning to return home to Zion from all corners of the globe has been put in their heart by God Himself and is confirmed time and again in His Word. With all due respect to Theodor Herzl, he was not the father of Zionism. God Himself is. Jerusalem is Zion! It is even the earthly dwelling place of the One God (Ps. 76:2, etc.).

I question those states who, defying international convention, don’t keep their embassies in Israel’s capital, but rather in Tel Aviv: Are they not aware that they are acting in an anti-Zionist and anti-God manner? Don’t they care? I know the flawed excuses regarding Jerusalem. But according to the biblical and historical evidence, Jerusalem, Zion, is the millennia-old capital of Israel.

Next Why Would God Kill Moses?