Men are better than women 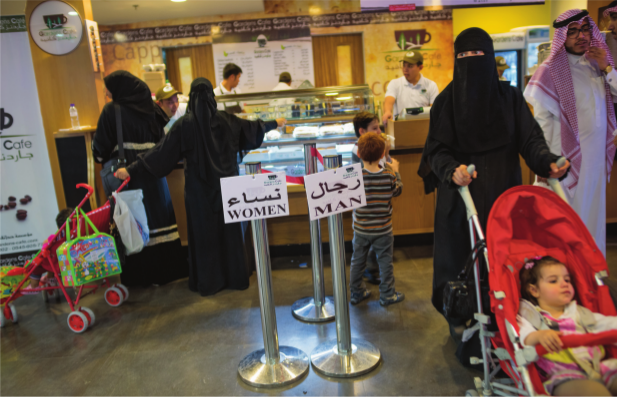 – According to Islam, a woman is her husband’s prisoner and must obey him

In a Friday sermon delivered in Columbia, South Carolina, on August 11, 2017, Egyptian-American cleric Muhammad Sayyed Adly said the man owns the woman and women should be “as prisoners in your hands or in your house,” adding that the husband should not mistreat his captive, just as one should not “mistreat a cat or dog.”

“The man is in charge of the woman. He is the head of her, the owner of her, and the ruler, and he is the one who corrects her when she goes astray.

“That is because men are better than women….This is the Sunna [law] of Allah….

“Yes, I know that I am in America and that we have freedom of speech. This is what we believe. If you believe different from what Allah is saying, forget about all this kind of foolish stuff. Allah said: ‘[Men] are exalted.’….

“As a result of this, you find that the Prophet [Muhammad] told us: ‘A nation with a woman ruler will never succeed.’ This is part of the guardianship. No nation that makes their governor a woman can ever succeed….

“The Prophet said…if your wife asks for permission to go to the mosque, do not prevent her from going to the mosque. He is saying that a woman could not leave her house without asking for the approval of her husband, even to the best of places and for the best action, which is prayer.

“What are you going to say when the Prophet said: ‘There is no marriage without a guardian.’ There is no marriage accepted in Islam without a guardian. He made it clear in another hadith [tradition] that a woman could not give a woman in marriage, even if it is her own daughter. It has to be the father. If the father is dead–the brother. If the brother is dead…other people are there, which Allah or his Prophet have named….

“A woman is not supposed to welcome anybody or permit anybody in her house without her husband’s approval. Brothers and sisters, this is in the religion, in the books of hadith, in the Quran. I am not making it up….

“A woman cannot travel without a guardian….That means a man who could not marry her under any condition–her father, her son, or her brother….

“Be just, be fair, be kind, be gentle, be all these good things, because women are as prisoners in your hands or in your house….

“This does not mean to mistreat them, because we Muslims do not mistreat the captives. Neither do we mistreat a cat or dog.”

Sheikh Adly has made similar statements in the past. In a sermon posted on his YouTube channel on October 2, 2014, he advised the men in his congregation to marry a virgin, who is like a “clean bottle.”

“How can I determine if my wife is righteous or not righteous? It is according to her behavior….The Prophet Muhammad describes a righteous woman to be: ‘If he commands her, she will obey him.’….I want to think a little bit about the word that came in the hadith: ‘Ordered her.’ Some wives say: ‘Don’t talk to me like this’; ‘I am not your slave’; ‘Who do you think you are?’ But it doesn’t matter if he orders you or he says ‘excuse me’ or ‘please.’ It does not give you the excuse to be disobedient. Even if he orders you, [you say:] ‘Yes, sir.’.…

“All she needs is that at five o’clock–half an hour before your time to come back home–she will jump into the shower for five minutes, take off this garment, this dress that she has, that smells of onions and garlic and all kinds of stuff, and throw another thing on her.

“She will take a hairbrush for one minute and do it like this, and that’s it. [She will] put a smile on her face when she goes to open the door for her husband, welcoming him, making him feel at home when he comes….

“The Prophet advised us to marry a woman who is a virgin…because her womb is much cleaner….It’s a clean bottle–nothing has been stored in it before. Okay? Her mouth and her breath are much better, and she doesn’t know too much about tricks and playing games. She will be content with the little bit he gives her….

“The Prophet said that when a man invites his wife to his bed and she refuses, and he spends the night angry at her as a result of this, the angels of Allah will be cursing her until the morning. So a righteous woman always makes herself available for her husband….

“One last thing that I want to say is also a righteous woman allows her husband to be the manager, to be in charge, the boss–whatever you want to call it–because Allah said: ‘Men are in charge of women.’ So a woman has to allow her husband to be the final maker of decisions in the house. She can give her opinion, or say what she thinks, but she has to understand that the guardianship and the leadership, and the one who wears the pants in the house, is the man and not the woman. We don’t live by the American way. We live by the Islamic way, the Sunna way.”

Next A Letter to the Editor