The 1963 movie by that name was an epic, 210-minutes-long madcap comedy hit featuring dozens of Hollywood stars. But that celluloid extravaganza was nothing compared with what we are witnessing in real life today, for the world truly has gone mad.

Consider the Anne Frank story. The Jewish schoolgirl fled the Nazis and hid in a secret space in a house in Amsterdam. Ultimately, she was exposed by neighbors, arrested, transported to Westerbork, Auschwitz, and finally to the Bergen-Belsen concentration camp, where she perished. Today, the house in Amsterdam is a museum in which the story has been universalized and the Jewish aspect suppressed.

A Dutch Jew who worked at the museum last year, Barry Vingerling, 25, became more devout and began wearing a kippah (knitted skullcap), as many religious Jews do. But the directors forbade him from wearing any religious symbol. He was forced to hide his Jewish identity, just as Anne Frank had been forced to hide hers. Only after a months-long public battle was permission given to wear the kippah.

As of May 28, the new head of the 65-nation UN Conference on Disarmament, dealing with chemical and nuclear disarmament, is the representative of Syria. But in April, as on frequent occasions in recent years, Syria was accused, on compelling evidence, of using chemical weapons to bomb its own citizens and rebel forces. Is this a case of the fox guarding the chicken coop? Will Syria appear on the conference agenda?

At Facebook, the internet editors permit Arab hate-speech posts declaring “death to the Jews,” but an Israeli post stating, “Most of those killed in Gaza were Hamas terrorists” or, “Israel has the right to defend itself,” results in the account being suspended (Arutz Sheva, April 16, 2018).

Of course, the bias of social-media giants is not only directed at Israel. An advertisement by the Franciscan University of Steubenville was rejected by Facebook because it included a picture of Jesus on the cross, calling it “excessively violent content” (wnd.com, April 2, 2018).

Not to be outdone, the official TV channel of the “moderate” Palestinian Authority aired an interview with Palestinian writer Hani Abu Zeid on April 10, who commented about the Jews: “They used to cry about the false Holocaust in the days of Hitler, the scope of which was not that large….Yes, it was a lie, and many Israelis, or many Jews, colluded with Hitler, so that he would facilitate the bringing of settlers to Palestine” (memri.org, clip 6519). 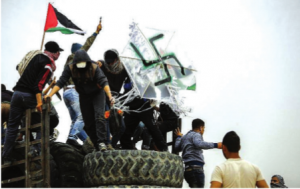 A parade of terrorists was embedded among the masses of protestors. Israeli officials released evidence that 32 of the 40 Gazans who died in the protests between March 30 and April 25 were affiliated with Hamas or several other terrorist groups (Meir Amit Intelligence and Terrorism Information Center, April 26, 2018). One victim, Yasser Murtaja, posing as a press photographer and widely hailed by the news media, was identified as a Hamas terrorist with the rank of captain.

Hamas, meanwhile, issued instructions for journalists reporting about the demonstrations: The events are to be presented as “an assault by the [Israeli] occupation army…on a peaceful and nonviolent civilian uprising.” The words “clash” and “confrontation” are forbidden, but the Israeli military response to Palestinian actions can be mentioned. The tranquil family life of Palestinian victims should be emphasized. Violators of these directives are considered “traitors” and will be punished.

Indeed, some reporters have been beaten up, or far worse, by Palestinian enforcers. Even the intimidated New York Times complies. Its stories (for decades), have condemned Israel and voiced pro-Palestinian sympathies.

The Prophet Samuel’s challenge to the people of Israel is valid for all: “[F]ear the LORD, and serve Him in truth with all your hearts, consider how much He has done for you” (1. Sam. 12:24).

Previous The Midrash* on the Mount, Part 2

Next The 70-Years’ Miracle