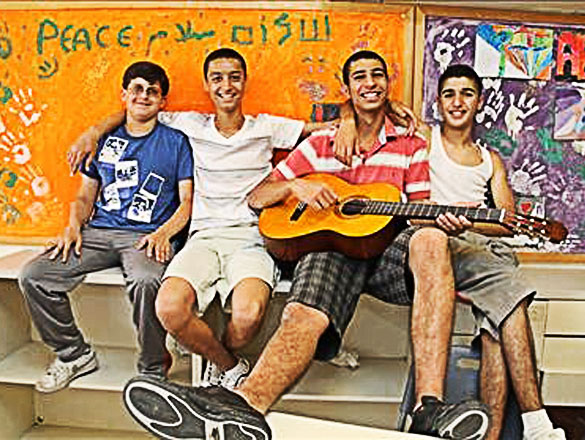 Israel’s critics often accuse it of practicing apartheid policies against Palestinian Arabs. Does the charge stand up to scrutiny? Let’s check the facts.

In South Africa, the former government-enforced apartheid (“apartness”) system of racial segregation restricted citizenship and the right to vote to whites only. It segregated schools, hospitals, public services and public amenities (beaches, park benches, drinking fountains, etc.) by race, and resulted in inferior rights and status for non-whites in all aspects of life.

Israel’s population of 7.795 million includes some 1.6 million Arabs (20.5%). Most consider themselves “Palestinian” Arabs. By tribal and familial relationships, they are identical with the Palestinian Arabs of the Palestinian Authority and Jordan–brothers, sisters, aunts and uncles.

One could go on, but the point is made: Israel is anything but apartheid. The charge is a pernicious lie. If it were apartheid, Israeli “Palestinian” Arabs would not have any of the rights which they do, in fact, enjoy, more rights even than in any Arab state.

As for the squalor of some areas that the PA received from Israel, it is a sad fact that all attempts by Israel in the past to improve housing, connect utilities and provide public services were immediately condemned and rejected by UN officials and the Palestinians themselves, who viewed such improvements as back-door “colonization,” linking the areas to Israel permanently. Modern Israeli-built homes for Palestinians stood empty for dec-ades, a symbol of wasted money and goodwill by the Jewish state. The PA, now administering the areas for almost 20 years, bears responsibility for the conditions, having squandered billions of dollars of international aid by funneling off funds to private bank accounts and payoffs to various Palestinian power lords.

That Arab residents of the PA areas must deal with the inconveniences of Israeli security measures (as must Israeli Jews!) is a direct result of continued PA belligerency and incitement to terrorism. That’s the reality of war. Had the PA continued peace negotiations and fulfilled its security obligations under the Oslo and subsequent accords, these measures, including the Security Fence, would be unnecessary. Security measures are just that, but they are not evidence of apartheid.

On the other hand, PA chief Mahmoud Abbas and other PA spokesmen have gone on public record stating repeatedly that the future Palestinian state will not allow a single Israeli or Jew to be in it. Asked if every Jew must leave, PA Ambassador to Washington, Maen Rashid Areikat, said: “Absolutely….[T]ransfer Jews who…fall under the jurisdiction of a Palestinian state…This is a very necessary step” (Tablet, October 29, 2010). They intone separateness in their demands. That is apartheid. That is a policy of apartness based on race or religion.

But is it any wonder? Christians in the PA have suffered the same fate as Christians in many Muslim states as a persecuted minority. Discrimination, constant harassment and frequently murder have diminished their numbers. Forced by intimidation to toe the line, Christians dare not criticize their Muslim overlords publicly.

From the Middle Ages till today, apartheid policies based on religion are applied in Muslim countries in accordance with Sharia (Islamic religious) law that requires imposing an inferior status upon non-Muslim, “infidel” minority groups (so-called dhimmis).

Israel is a model of liberty and tolerance under extremely difficult, real security concerns. The “Israeli apartheid” campaign has nothing to do with social justice or human rights. It is an insidious effort to discredit Israel in world opinion so as to lead to its international isolation and ultimately dismantling through boycotts and sanctions. The critics of Israel, were they honest, would do better to look elsewhere for an example of apartheid. It’s really not that hard.

Next An Old Spirit in the Middle East