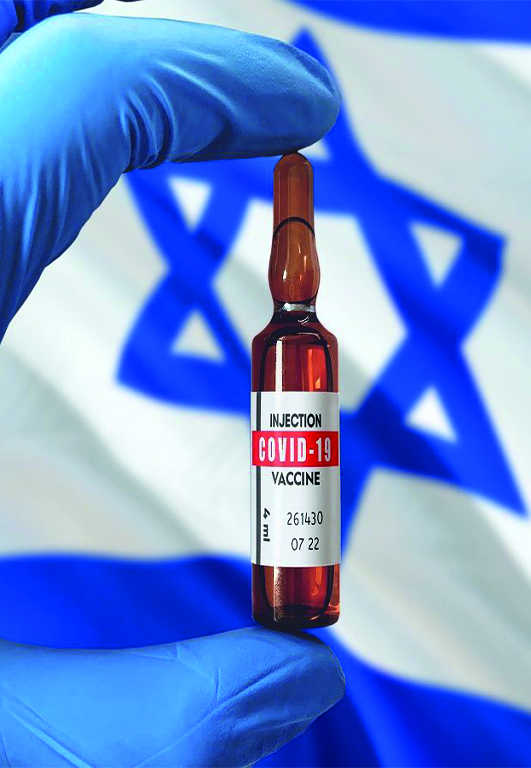 Half of Israeli citizens have already received the coronavirus vaccine, a higher share than in any other country in the world. Tested recipients have virus antibodies six to 20 times higher than before being vaccinated.

Why is Israel number one?

National media campaigns stressed the safety of the vaccination program. Religious leaders and other influencers were contacted and persuaded. Before the vaccinations arrived, just 40% of citizens wanted to inoculate. Now almost all do. Grateful Israelis have been delivering pizza and hamburgers to the health professionals working long hours to vaccinate the public (The Jerusalem Post, January 06, 2021).

Health care in Israel is highly organized and widely available. Ninety percent of Israelis trust and are satisfied with their health programs. Preventative care, including vaccinations (such as annual flu shot campaigns), is encouraged. Israel has vast experience in being ready for health and security emergencies and can act quickly. Health clinics are located in every community. Data are secure and tracked nationally to monitor patterns.

A breath test developed by Scentech Medical in Tel Aviv is 98% accurate in identifying the coronavirus. The non-invasive technology analyzes eight thousand volatile organic compounds present in every human breath. It could replace the current testing method, requiring a nasal swab to collect mucus and saliva, which can produce false negatives if not administered correctly.

A new treatment for multiple sclerosis (MS) patients, 2.3 million worldwide, has been developed by Hadassah University and NeuroGenesis in Jerusalem. The treatment halts progression of the disease and improves neurological ability. The treatment, still in the testing phase, involves taking cells from the bone marrow of MS patients and injecting them into the patient’s spinal chord fluid. (Times of Israel, January 15, 2021)

In the first surgery of its kind, an artificial cornea was implanted in the blind eye of a 78-year-old man at Rabin Medical Center in Petah Tikva in a 10-minute procedure. A few minutes after the bandages were removed, he could read text and recognize family members. Ten test patients with deformed, scarred or opacified corneas are having them replaced using no human tissue according to Dr. Gilad Litvin, founder of CorNeat Vision in Ra’anana. (The Jerusalem Post, January 21, 2021)

Three persons were killed in security-related attacks last year, two civilians and one soldier, according to the Israel Defense Forces (IDF) statistical report released December 31, 2020. That is the lowest annual number of civilians and soldiers killed in terror attacks or combat since Israel’s founding in 1948.

The record low number can be attributed to Israel’s increased diligence in fighting terrorism. Fifty illegal Palestinian gun-making workshops, for example, were shut down in the West Bank (Judea and Samaria) last year.

The Iron Dome defense system shot down 80 missiles out of a total of 176 fired from Gaza last year. Within Israel, there were 60 terror attacks in 2020.

And in case you were wondering, the IDF also reported on vegetarians and vegans in the military. Fifty tons of tofu were served in the military services last year, and 1,875 soldiers were issued non-leather boots.

Some 50 thousand Israelis died during 2020, four thousand of them coronavirus-related.

Due to COVID-19 restrictions worldwide, only about 20 thousand people made aliyah (immigrated) to Israel.

Every week there are 52 commercial airline flights between Tel Aviv and Dubai (UAE). Even one such flight would have been unimaginable two years ago. Tourism and trade are thriving despite the coronavirus.

In Morocco, Jewish history will now be taught in schools, a first in the Arab world (Times of Israel, December 13, 2020).

Since the signing of the Abraham Accords on August 13, 2020, marking the beginning of normalization between Israel and the United Arab Emirates, the trickle of diplomatic relations has expanded and now includes Bahrain, Morocco and the Sudan.

Skeptics pooh-poohed it since no major Arab states were involved. But that is changing. There are stirrings of activity suggesting other Arab nations could soon normalize relations: Indonesia, Mauritania, Oman, even Saudi Arabia.

Credit for the new peace goes to Israeli Prime Minister Benjamin Netanyahu and former US President Donald Trump, who envisioned a new Middle East that doesn’t yield to Palestinian threats and propaganda.

Next Thanking the Father for His blessings