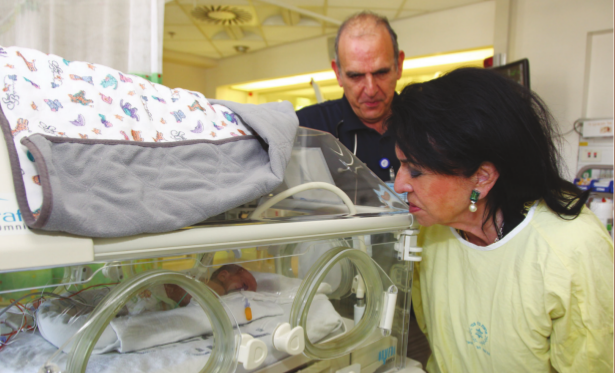 The Rambam Hospital in Haifa, like most hospitals in Israel, doesn’t only serve Jewish patients. Half or more are Arabs.

And what may be even more surprising to readers is that many of them are Arabs from Gaza, Judea and Samaria (the West Bank). At Rambam, 1,200 Palestinian-Arabs from these territories are cared for each year.

This did not escape the attention of one such patient, M., a senior official of the Palestinian Authority. He was treated for cancer and has recovered. “When I came to Rambam, I saw a medical team caring for patients, but I also saw the suffering of the sick children,” he told The Jerusalem Post (June 12, 2017). “Palestinian, Israeli, Syrian and other children are treated there for serious illnesses and need all the help they can get.”

In gratitude, he made a donation of tens of thousands of Israeli shekels to the hospital to help build a pediatric oncology center.

The unusual donation from a Palestinian-Arab to a Jewish institution was widely reported internationally, leading the Palestinian-controlled news agency WAFA to release a story denying a senior PA official had given money to an Israeli hospital (June 15, 2017).

In fact, the list of connections between Palestinians and Israeli medical institutions is long, recounted by reporter Ruthie Blum (The Jerusalem Post, April 17, 2016):

• While Palestinian Authority President Mahmoud Abbas was crossing Europe last year to push for anti-Israel resolutions at the United Nations, his critically ill brother Abu Lawi, who lives in Qatar, was being treated for cancer. He didn’t go to London, Paris or New York for treatment, he went to the Assuta Medical Center in Tel Aviv.

• That’s the same hospital where Mahmoud Abbas’s wife Amina had surgery in the summer of 2014, and where her brother received urgent heart surgery in October 2015.

And what about the Hamas terror organization in Gaza?

• Former Hamas Prime Minister Ismail Haniyeh’s 68-year-old mother-in-law was treated, not in Zurich or Berlin, but in Jerusalem at the Augusta Victoria Hospital in June 2014.

• Then, in October, his daughter spent a week in an Israeli hospital. And in November, Hamas spokesman Moussa Abu Marzouk’s 60-year-old sister was treated for cancer…in Israel.

• A year earlier, in November 2013, Haniyeh’s one-year-old granddaughter was treated at the Schneider Children’s Medical Center in Petach Tikvah near Tel Aviv.

This leads to the obvious question: Why do they keep sending their families for help to the country they want to destroy?

Haniyeh and Abbas expressed their gratitude by calling for a knife intifada against Israel in September 2015, with hundreds of knife-stabbings, car-rammings and fire-bombings against innocent Israelis that continue to this day.

Why does Israel help enemies needing medical help? After all, Israel withdrew from Gaza completely in 2005. What responsibility does Israel have to those who wish Israel’s destruction? How often in history has such compassion occurred?

Israel has established a field hospital on its northeastern border to treat thousands of victims of the Syrian civil war. Hospitals across Israel are treating Muslims, Arabs, Christians, Druze and other victims of the senseless violence free of charge. Is it due to expected short-term public-relations benefits? Some giant fund-raising scheme?

It’s more fundamental than that. It’s because of the biblical commandment to love one’s fellow man. In Exodus 23:9 and elsewhere, it states: “Do not oppress a stranger; you know how it feels to be strangers, because you were strangers in the land of Egypt.” This is the guiding principle.

And for the Jewish nation, that’s the right thing to do.

Previous Helping the needy in times fraught with fear

Next A sorry story from Sweden