Israel was the first nation to share its supply of COVID-19 vaccinations with an outside population, namely with the Palestinian-Arabs. This belies media “reports” claiming Israel ignored them. Helping others, even sworn enemies, is nothing new for the Jewish state, whether through science, technology or direct aid. It bears witness to a millennia-old Jewish biblical principle.

Was Israeli innovation what the Prophet Isaiah also had in mind when he taught that the Jewish people would return to the land of Israel and serve as a “light unto the nations” (42:6; 49:6)?

Despite its young age and being subject to constant war, the State of Israel has defied all the odds and has fulfilled this lofty mission in almost every aspect of life.

Israeli innovation in the medical field

On the medical front, lives worldwide are being saved thanks to Israeli innovations like these examples [Some we’ve listed before. Ed.]: 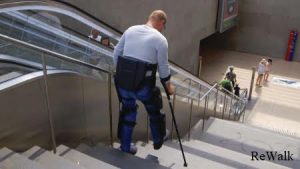 A man with a spinal cord injury using an Israeli-made ReWalk exoskeleton to walk down stairs.

1. Azilect. A drug to help treat Parkinson’s disease.
2. Copaxone immunomodulator. A drug for treating multiple sclerosis.
3. Elelyso. A drug for the treatment of Type 1 Gaucher’s disease.
4. ReWalk. A bionic walking assistance system enabling paraplegics to stand upright, walk and even climb stairs.
5. OrCam MyEye. A portable, artificial vision device allowing the visually impaired to understand text and identify objects through audio feedback.
6. The Pillcam. Doctors can record images of the digestive tract via a pill-sized capsule containing a tiny camera–enabling them to detect and monitor disease.
7. The Emergency Bandage. The first-ever field dressing that can be applied and secured with one hand to prevent bleeding from battlefield injuries.

Israeli technology has also made life easier for people worldwide by improving agricultural production:
1. Watergen. A technology that extracts water from air, which can bring fresh water to areas without any access to clean, healthy water.
2. Drip irrigation. A revolution in agriculture technology allowing for farming with minimal water.
3. Grain cocoons. A simple, inexpensive way for African and Asian farmers to keep their grain market-fresh with special bags protecting the harvest from extreme heat and humidity.
4. “Zero-discharge” system. Allowing fish to be raised almost anywhere by eliminating the environmental problems in conventional fish farming, with no dependency on electricity or proximity to a body of water.
5. Reusable plastic trays. Collects dew from the air, reducing the need to water crops by up to 50 percent.

Aside from medications helping those in need of medical care, Israel sends doctors to set up field hospitals and search-and-rescue teams when natural disasters occur in all corners of the world. [In fact, other nations’ medical teams send the most difficult cases to the Israelis. Ed.] In 2016, the World Health Organization recognized the Israeli Defense Forces’ emergency field hospital as the best in the world. The WHO designation gives Israel priority access to begin offering immediate assistance in international disaster zones. A few examples include:
1. Earthquake in Turkey, 1999. A search-and-rescue unit rescued 12 survivors and the hospital treated 1,200 people, performed 40 surgeries and delivered 15 babies.
2. Earthquake in India, 2001. The Israeli team treated 1,300 injured, performed 52 surgeries and delivered 12 babies in its 100-bed field hospital.
3. Earthquake in Haiti, 2010. Medics treated over 1,100 patients, performed 319 surgeries and delivered 16 babies.
4. Tsunami in Japan, 2011. A 53-person delegation with 62 tons of medical supplies treated 220 patients in surgical, pediatric and maternity wards and an intensive-care unit.
5. Typhoon in the Philippines, 2013. A team of 150 doctors and nurses brought 100 tons of medical supplies and humanitarian aid.
6. Earthquake in Nepal, 2015. A team of 122 medical workers and 45 physicians brought 95 tons of equipment for a 60-bed hospital that treated nearly 1,600 patients, performed 85 surgeries and delivered eight babies.
7. Golan Heights/Syrian border, 2016-2018. A field hospital established to help victims of the Syrian civil war treated over 4,000 people, including 1,409 children.

These are examples of the thousands of technologies and projects through which Israel is helping to make the world a better place and is assuming its ancient and biblical mission to be a “light unto the nations.”

Previous Thanking the Father for His blessings

Next A kangaroo court in The Hague?