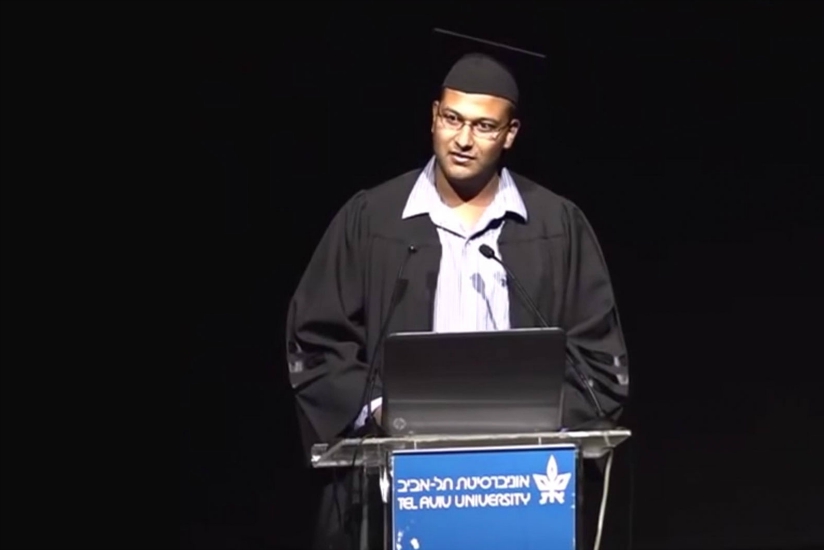 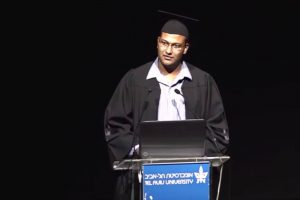 Good evening. It is my pleasure to speak to you on this evening that represents the end of one chapter in our lives and the start of another. I’d like to invite you all to take a moment to reflect about the beginning of your adventure in Israel. Do you remember receiving your acceptance letter [to the program]? You were probably excited to come to Israel.

Then, you started telling people you were coming to Israel and maybe you started to get a little nervous. Everybody in this room has had a friend or family member who warned him not to come to Israel.

There’s war there! Aren’t you afraid of being blown up? Do they even have water there? Do Jews speak English? If you think you heard a million reasons why not to come to Israel, I heard a million and a half. Growing up in Egypt, my entire country had opinions about Israel, and none of them were positive. All we knew was that we had fought bloody wars, and they were not like us.

My exposure to Israel was through music and television. On the radio, there were anthems about the destruction Israel had caused. In the movies, Israelis were spies and thieves, and in spite of the fact that our countries struck a famous peace accord in 1979, the Israelis, I was told, were our worst enemies.

A recent Egyptian action film called Cousins, a box-office hit, told the story of an Israeli spy who married an Egyptian woman and had a family with her, only to kidnap her and her children to Israel. When I told my mom I was coming to study in Israel, she was understandably terrified that I would get a girlfriend.

I arrived to Israel knowing only what I had learned in the movies and in the media. So, at the airport, when the security official asked why I decided to come here, I half-joked, “I always heard the Jews are bad people and I came to see this for myself.”

I expected to find that people here were unfriendly and especially unhappy to meet Egyptians. I was pleasantly surprised to find just the opposite. I was invited everywhere, from [a Jewish] Shabbat dinner to [Muslim] Ramadan Iftar meals, to plays and even to political gatherings. And the diversity I found here was as surprising as the warmth of the people.

On my very first day here at the university, I saw men in kippot [modern Jewish head coverings for men] and women in headscarves and hijabs [full-body covering for Muslim women]. I saw soldiers walking peacefully among crowds of lively students. I learned there were people of every kind on campus and that the university had a space for all of them–Jews, Muslims, Christians, Druse, Beduin and even international students.

I discovered that the diversity of the Tel Aviv University campus was reflected in Tel Aviv too.

Where else can you find a Christian Arab whose apartment is decorated in posters of Mao and Lenin? Where else can you see a Beduin IDF [Israeli Army] soldier reading the Quran on the train during [the Muslim month of] Ramadan?….To be sure, my experience here has been defined by the unexpected.

While traveling beyond Tel Aviv, one cannot help but notice the proximity of kibbutzim [Jewish farm collectives] to Arab villages, and the easy relationship they seem to share with each other.

Perhaps the greatest revelation of my being here was that in spite of all the conflicting histories and identities, people are still able to live their daily lives in a spirit of cooperation….

I often reflect on the strangeness of coming to this country, where the people I was taught to think of as enemies were transformed into my teachers, classmates, vendors, doctors and guidance counselors. When Israelis ask me, how does it feel for you to be in this country, I have to be honest. I tell them, before I knew you, I didn’t like you. But I never considered that my “enemies” would accept me to their school, to their country, and moreover into their society.

Interestingly, at the end of my experience, one of the biggest surprises came not from Israel, but from Egypt.
Each year, during Ramadan, there is a special series of soap operas which families all over the Arab world gather to watch after breaking the fast. This year’s soap opera was called Haret el-Yahoud, “The Jewish Quarter,” and it told the story of Egyptian Jews in the wake of Israel’s establishment.

The series deals with questions of identity and politics, and features a cast of Jewish and Muslim characters, and there is even an inter-religious love affair.

As a student of history, I can’t say that the series was perfect, but the depiction of Jews for the first time as human beings, as people with a love of family and country rather than mortal enemies, is nothing short of extraordinary. And while Egypt has a way to go before accepting Israel as a friend, perhaps this series will inspire more Egyptians to at least be willing to rethink “the enemy.”

After a year of countless surprises, I came to realize that there is a lesson in all this, one that I think we all can use. Moreover, I think it is something we M.A. students, who strive to understand things more precisely, uniquely understand: we must always question our assumptions. Being here in Israel has taught me that life is full of paradoxes and complexities–that nothing is straightforward, and that things are often not as they are made to seem. No matter how much education and life experience we acquire, we must always dig deeper.

So, today, as we celebrate the end of a great year, let’s also remember to go forward with a sense of renewed curiosity, knowing the only thing one should truly expect in life is for life to defy your expectations.

Previous 65 Miracles in One Day