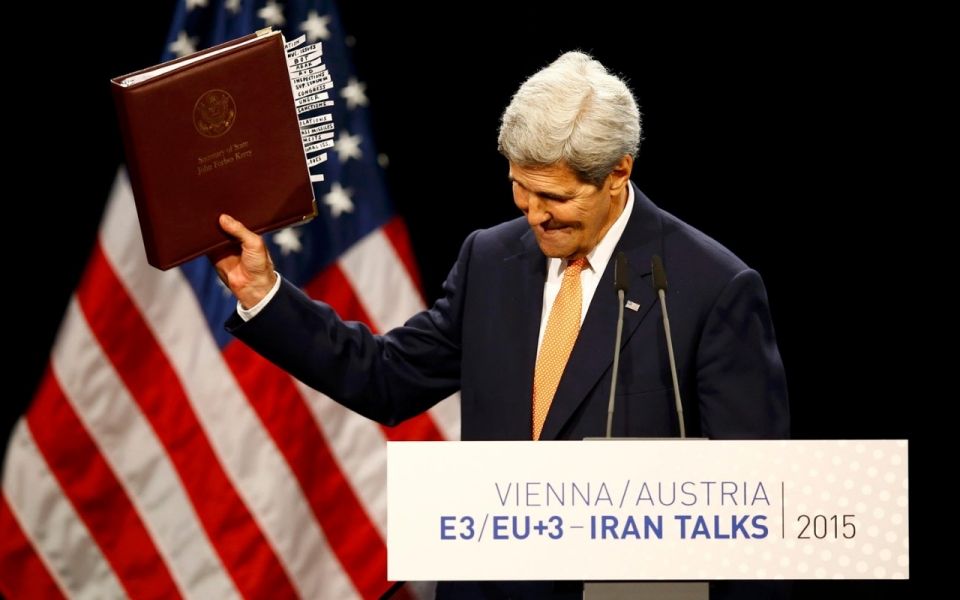 On July 14 this year, Persian celebrations continued for hours into the night in Tehran. A million revelers filled the streets of the Iranian capital. The masterful Iranian negotiators had come home from Palais Coburg on Theodor Herzl Square in Vienna with a dream deal.

An early Christmas gift of between US$100 and 150 billion to the Iranian government was on its way, and much, much more (some 500 billion over 10 years), resuscitating a nation that, under the burden of crippling economic sanctions, had been on the brink of bankruptcy. Now Iran was about to be incarnated as a nuclear-threshold state. And the Islamic Revolution was secured.

In his first public words after the announcement, the Iranian Supreme Leader Ayatollah Ali Khamenei pronounced victory, the continuation of all nuclear and missile programs, and support for terrorism, while masses chanted, “Death to America! Death to Israel!”

The United States, allied with Britain, China, France, Germany and Russia (the P5+1 or E3/EU+3), had agreed to the terms of surrender to Iran. Heads of state around the world gloated about the historic deal of the century. US Secretary of State John Kerry and Iranian Foreign Minister Mohammad Javad Zarif could pat each other on the back, a shared Nobel Prize assured. US President Obama had established a legacy for himself. 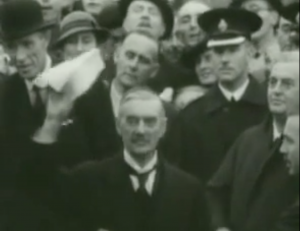 Worldwide, trade delegations scheduled flights to Iran to make deals. German Vice Chancellor and Minister for Economics and Energy Sigmar Gabriel (who once called Israel an “apartheid regime”) and his team were the first to arrive. German exports to Iran were down to US$1 billion in 2013, but are expected to exceed $10 billion now, a boon to the German economy. Germany is Iran’s biggest trading partner.

Obama had said that, if Iran were to violate the agreement, sanctions could be snapped back, restored rapidly. That was nonsense, of course, and everyone knew it. Once the flow of money was begun, no one would shut the tap. Certainly not the Chinese or Russians. Even the Germans were never in full compliance when the sanctions were in force. Oh, and by the way, the Iranians have a long history of violating every nuclear agreement they have ever signed.

Throughout July, President Obama repeated the mantra “anytime, anywhere” regarding inspections of nuclear facilities. When the agreement text was finally released, however, it was clear that was not the case. Surprise inspections were taboo, advance notice would be required, Iran could even object and initiate a 24- to 90-day delay.

The President’s words were a “rhetorical flourish,” not meant to be taken seriously, said American chief negotiator Wendy Sherman. That’s the same Sherman who negotiated to keep North Korea from getting the nuclear bomb in the ’90s under President Bill Clinton.

On October 21, 1994, Clinton had boasted: “This is a good deal….North Korea will freeze and then dismantle its nuclear program. The entire world will be safer as we slow the spread of nuclear weapons….Inspectors will carefully monitor North Korea to make sure it keeps its commitments.” (P.S. North Korea now has the bomb.)

Obama has been adamant insisting he would prevent Iran from getting the nuclear bomb. But now everyone knows that’s simply not true. If Iran abides by the terms of the agreement, its nuclear program will, at most, be delayed by 10 to 12 years, not shut down, and will need only a year to build a bomb. But that’s only if Iran keeps its word. Even Obama himself admitted Iran needs just three months. Recall that Iran has a long history of violating every nuclear agreement it has ever signed.

The list of blunders and concessions is astonishing (see box nearby). 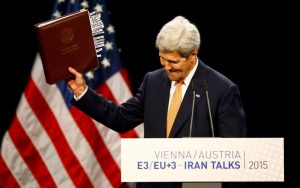 We can trust the Iranians: US Secretary of State John Kerry jubilant in Vienna after reaching agreement with the Iranians, July 14, 2015. How many more victims?

Caroline Glick summed it up best: “If Iran abides by the agreement, or isn’t punished for cheating on it, in 10 years, the greatest state sponsor of terrorism in the world will be rich, in possession of a modernized military, a ballistic missile ar-senal capable of carrying nuclear warheads to any spot on earth, and the nuclear warheads themselves. (The Jerusalem Post, July 16, 2015)

In fact, the UN Security Council, the European Union and a score of other nations are gambling that Iran, while being enabled to become a terrorist nuclear superpower, can be trusted not to become one.

Israeli Prime Minister Benjamin Netanyahu called it a “bitter mistake of historic proportions” and deplored the failure to continue the successful strategy of economic pressure on Iran. He said, “By not dismantling Iran’s nuclear program, in a decade this deal will give an unreformed, unrepentant and far richer terrorism regime the capacity to produce many nuclear bombs; in fact an entire nuclear arsenal, with the means to deliver it.”

The prime players will get what they wanted, wrote Washington Post commentator Charles Krauthammer (July 2, 2015): “Obama will get his legacy. Kerry will get his Nobel. And Iran will get the bomb.”

The irony of Nobel Peace Prize winner Obama launching an arms war can’t be overlooked. Arms dealers around the world (120 in London alone) expect huge sales increases this year as Middle East countries protect themselves against terrorist groups that will soon be better-funded by Iran. Saudi Arabia is building 16 nuclear reactors with Russia’s and France’s help. Israel is on high alert.

Having pushed off the Iran Bomb problem to the future, when he’ll be safe in retirement, President Obama will now be able to focus his last 16 months in office on his other foreign-policy target: Israel.

What must we do now?

Callers to our office are asking what Bible believers should do. Some are praying and fasting for their own nation, the Middle East and Israel. Much more quickly than we expected, we have been thrust into an age of turmoil. Prophecy experts will expound on why we have reached the Last Days. A great war is coming and if not we, then our children will suffer through it. We must be ready.

A Jewish answer was given by the rabbis two millennia ago, “Whoever saves a life, it is considered as if he saved an entire world” (Sanhedrin 4:9). Rabbi Eliezer advised, “Repent one day before your death” (Pirkei Avot 2:10). The message is clear: Save another life, win them back to faith in God. Change your life’s path to keep His commandments. You could die tomorrow, so repent today (Shabbat 153a).

And note these words of comfort in times when“Men’s hearts [fail] them for fear, and for looking after those things which are coming on the earth. And when these things begin to come to pass, then look up, and lift up your heads; for your redemption draws near” (Lk. 21:26, 28). “Watch and pray,” do not be caught sleeping (Mk. 13:33ff).

Addendum: One consolation is Canada has decided to “continue to judge Iran by its actions,” and is keeping economic sanctions on Iran in place.

A travesty of errors

Previous The Adversary wants to Imitate