– 25 years after the Oslo Accords 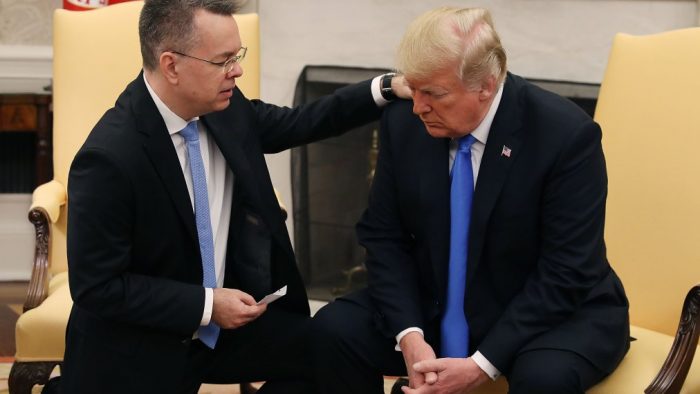 Picture this: An American Evangelical pastor kneeling in the Oval Office of the White House and praying for President Donald Trump, with the pastor’s hand placed on the president’s shoulder.

It’s no fiction. On October 12, Pastor Andrew Brunson, who had been in a prison in Turkey since 2016 on false charges of espionage, and was facing a 35 years’ sentence, was released and flown home to America. Invited to meet the president the next day, Pastor Brunson thanked him for his great efforts…and prayed for him.

Such would be unimaginable with a President Barack Obama or a German Chancellor Angela Merkel.

And yet, the unthinkable was exactly what the world expected 25 years ago when the Oslo Accords were signed on September 13, 1993, in Washington. Israeli Prime Minister Yitzhak Rabin and Yassir Arafat, the terrorist leader in military uniform, signed the agreement while US President Bill Clinton looked on.

Would the leader of the Palestine Liberation Organization now lay down his arms and turn into a nation-builder?

The Israeli government naively hoped so and gave the nascent Palestinian Authority 50,000 weapons trustingly believing Arafat’s “police force” would use them to keep the peace among the many rival Palestinian terror groups. Instead of quashing those groups, however, Arafat incorporated them into his octopus-network of terrorist factions. And the weapons? They were turned against the Israelis instead.

The reality was that terrorism rose in the ensuing months to levels not seen in decades. Some 1,600 Israelis were murdered, tens of thousands were injured. Thousands of children became orphans, hundreds of wives and husbands became widows and widowers.

Unwilling to admit they had been duped, left-wing Israeli officials still insisted the plan was working. To this day, Israel’s leftists maintain that a Palestinian-Israeli deal, one in which Israel gives up great swaths of land to the Palestinian-Arabs, is the best option.

It is, however, unrealistic to imagine a peace agreement as workable when one side has not been defeated. Recall that Britain made peace in Northern Ireland when the Irish Republican Army laid down its arms.

Middle East historian Daniel Pipes wrote, “Wars usually end when failure causes one side to despair, when that side has abandoned its war aims and accepted defeat, and when that defeat has exhausted its will to fight” (“A new strategy for Israeli victory,” Commentary, January 2017). In the case of the Palestinians, they had been defeated, but they had no intention of quitting their efforts of destroying Israel.

Today, after billions of dollars of funding from other countries, the Palestinian Authority is a corrupt entity whose funds have been siphoned off to sponsor terrorism, pay pensions to families of terrorists, purchase luxurious homes and cars, and been redeposited in secret accounts overseas.

The population has made limited economic advances, but collectively, they are still far from being ready to function independently as a state. It is precisely that foreign funding–the portion remaining–that has allowed the PA to survive at all.

Peace is no closer to being realized. Indeed, the enmity is as great as ever, fired by inciting political speeches, hate-filled education, and anti-Semitic laws in the PA.

The Muslim clergy stand behind all this. Sheikh Muhammad Hussein, for example, the PA’s Grand Mufti of Jerusalem and Supreme Fatwa Council Chairman, declared it is forbidden to sell, give or bequeath land to the “enemies” (Jews or Israelis). It would constitute treason and result in excommunication (Al-Hayat Al-Jadida [official PA daily], April 13, 2018). In fact, Palestinians who sell land to Jews live under threat of death.

After 25 years, Israelis, considering all the terrorism they have endured and continue to endure, are not interested in any charade agreements with the PA, and certainly not interested in helping create a terrorist-state next door.

Previous Balaam then and now

Next A Collection of News Stories from Israel