How Christians should relate to Israel: Psalm 117 – A guideline

How many Gentiles praise God for His good deeds, mercy, bountiful blessings, lovingkindness towards…Israel? Gentiles giving praise for Israel’s blessing? Is this even an issue? Absolutely!

Consider Psalm 117, the shortest chapter in the Bible–just two verses: “Praise the L-RD, all you nations; praise Him, all you peoples; for His lovingkindness overwhelms us, and the faithfulness of the LORD is forever. Praise the LORD!” This means, as we shall see, that non-Jews should praise God for His kind deeds towards Israel.

Jews recite Psalm 117 frequently as part of the Hallel (Psalms 113-118) on religious festivals and at the beginning of each new month. It is also well-known to Christians for its universal message of gratitude to God. A spiritually-minded person, Jew or Gentile, who has experienced God’s kindness in some way–a blessing of healing, livelihood, finding a suitable marriage partner or whatever–is likely to thank and praise God for His chesed (Hebrew for lovingkindness; “ch” pronounced as in Bach).

Millions of Christian supporters of Israel do in fact thank God for His faithfulness and kindness to Israel. But other Christians, the vast majority around the world, who don’t think about Israel in particular, who think Israel’s biblical prophetic significance today is nil, would hardly thank God for Israel’s good fortune any more than for Gabon’s.

Even those who do acknowledge some minimal prophetic significance for Israel rarely acknowledge God’s lovingkindness to Israel today. They only view Israel as a confirmation of their own eschatological outlook and see the Jews solely as targets for conversion.

As with most of the Psalms, Psalm 117 was authored by King David (according to 11th-century Bible commentator Ibn Ezra). While different authors of other Psalms are identified, the collation of all the Psalms in the Book of Psalms is traditionally attributed to David. In any case, a Jew, an Israelite wrote Psalm 117.

According to its plain meaning then, an Israelite is exhorting the target audience, the nations (that is, all the Gentiles), to praise God for His lovingkindness for us (that is, the Jewish nation). This is the most logical, plain reading of the Hebrew text that begins with the command to praise in second person plural (“you”) and in the second half switches to first person plural (“us”) when providing the rationale. The Psalmist stands, so to speak, opposite the nations he addresses, speaking in terms of “you” and “we.”

There may be other legitimate interpretations, layers of meaning, connotations in addition to the simple meaning, but, according to the Talmudic hermeneutic principle “ein mikra yotze midei p’shuto,” Scripture does not depart from or lose its plain meaning (Yevamot 24a).

So, the nations are supposed to praise God for, or more correctly, because (ki in Hebrew) God’s lovingkindness for Israel is so great, so overwhelming.

Rabbinic commentators debate the reason for Gentiles praising God because He is good to the Jews. Why would the Gentiles care or feel inclined to do so? Some apply the Psalm to the time of David, when Israel’s dominion over neighboring nations was considerable (Ibn Ezra, for example). Others say it refers to the future Messianic Age, when nations will finally look favorably upon Israel (Radak). The latter view seems apropos since, historically, the nations, whether pagan, Christian or Muslim, were typically oppressors of the Jews. At any rate, the Psalm makes the point that God’s favor upon Israel is reason for praise by the Gentiles.

As mentioned above, lovingkindness in Hebrew is chesed. We can see what chesed refers to in other Psalms. Psalm 136 is particularly useful. It lists numerous examples of God’s chesed or lovingkindness in action. Each verse ends with “ki le’olam chasdo”–“because His lovingkindness is forever.” (Note: Many translations render the original Hebrew “chasdo” as “His mercy.” “Mercy” in Hebrew is more correctly “rachamim.”)

Here then are examples from Psalm 136 revealing God’s lovingkindness: Creation of the heavens–the sun, moon and stars (vv. 5-9); the Exodus, including the plagues upon Egypt and the splitting of the sea (vv. 10-15); His caring for Israel during the wilderness wanderings (v. 16); the defeat of enemies and the acquisition of their land by Israel as a heritage (vv. 17-24); the feeding of all flesh (v. 25).

With regard to the Exodus, the liberation of the enslaved Israelite nation, leading them through the wilderness, or feeding all flesh, many Christians would agree that God is worthy of praise.

But in today’s post-modern, post-Judeo-Christian society, an expected uniformity of thinking permeates all aspects of society, including many pulpits. Significant numbers of Christians comply with humanistic measures of selective social justice and relativistic morality, instead of God’s standards. Praising God for winning wars and acquiring land from others (or just liberating your own God-given land as Israel did in 1967) would be a hard sell to these PC Christians, biblical prophecies notwithstanding.

Yet, that is precisely the type of chesed Israel experienced in biblical times and still does today, and which the Bible foretells for the future. And the nations are called to praise God for it. It’s not the only type of chesed, but it certainly is one of them–and a major one as well.

For Israel or for all?

At this point, if not earlier, a critic may say my reading of Psalm 117 is too narrow, too Israel-specific, too exclusive. A more general interpretation is preferred, applying God’s goodness to all humanity. And certainly not one that is so politically-charged. And why such a big deal out of one tiny Psalm?

But it’s not only one tiny Psalm. We find this Israel-centered rationale for Gentile praise throughout Scripture. Psalm 98 refers to God’s victorious right hand (a biblical expression meaning victory in battle) that has displayed salvation and righteousness before the nations (vv. 1-2). Salvation or victory for whom? For Israel! God “has remembered His chesed [His lovingkindness] and His faithfulness toward the house of Israel: all the ends of the earth have seen the salvation of our God” (v. 3). What should the nations do in response? “Make a joyful noise unto the LORD, all the earth; make a loud noise and rejoice and sing praise. Sing with the harp…with trumpets…make a joyful noise before the LORD, the King” (vv. 4-6).

Moses, looking forward to the final redemption, recited a song just prior to his death in which he likewise exhorted the nations to rejoice for and with Israel, for the victory over its enemies (Deut. 32:43; see also Rom. 15:10).

Isaiah describes in chapters 60, 61, 62 and 66 how the Gentiles will recognize God’s glory upon Israel when it is finally restored. Not only will they recognize, but they will actively participate in supporting the process of bringing Jews back to Israel.

God calls upon the nations to celebrate Israel’s restoration to its land with sincere joy: “Sing with gladness for Jacob, and shout on the hilltops of the nations; proclaim, praise, and say, O LORD, save your people, the remnant of Israel” (Jer. 31:7 [6]). Moreover, the Gentiles are commanded to be active supporters and ambassadors throughout the world for Israel’s return to its God-given land (vv. 10-11).

Praise God for you, for Israel 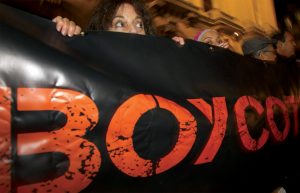 Clearly, the Bible does not view the issue of supporting Israel indifferently. It is not a matter of dispassionate debate. Passively watching prophecy being fulfilled in Israel in a TV news report is not a biblical option. The mockery of Christians supporting BDS boycotts of Israel requires a vociferous response.

Be grateful for God’s lovingkindness to you. Praise Him for the blessings you have received personally.

But also, God expects sincere, emotional praise–loud, joyful noise, with instruments–for His lovingkindness and faithfulness to Israel. He also expects active involvement, even as ambassadors and sponsors of Israel’s restoration. By fulfilling His promises to Israel, proving His faithfulness, His Name is glorified and sanctified. That is because He has a covenant with Israel, made with Abraham, one that can be a source of blessing for all nations. God has made His choice. Will you do the same?

Previous A Collection of News Stories from Israel

Next An email message at three in the morning