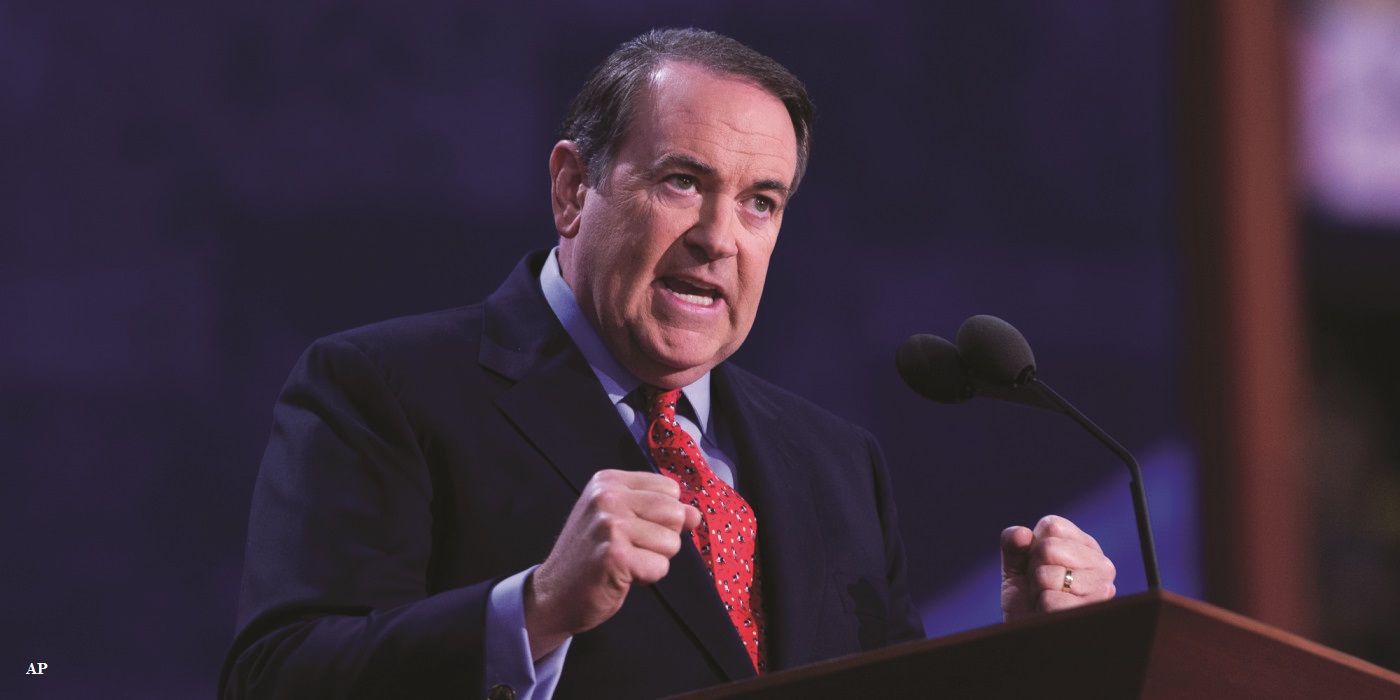 In many nations, a politician speaking in religious terms would be ridiculed. Most only want to be seen going to church at Christmas. But some politicians are proud of their faith and proclaim it readily, especially with regard to Israel.

Mike Huckabee, 62, became a Southern Baptist minister in 1972, pastored two churches from 1980 to 1992, served as governor of the State of Arkansas from 1996 to 2007, and was a candidate for US President in 2008 and 2016. He has millions of followers from his TV programs. He has made 100 trips to Israel since 1973. His daughter, Sarah Huckabee Sanders, is the White House Press Secretary, one of the most familiar faces in the administration after the president.

At a series of meetings in the Israeli Knesset (parliament) and to Jewish audiences in Jerusalem days before the inauguration of Donald Trump in January 2017, Huckabee spoke of his feelings for Israel.

• When I first came here, Israel was struggling to live off kibbutzim [collective agricultural communities], but is now one of the most entrepreneurial nations in the history of mankind, and won many wars it shouldn’t have (by conventional measure). There is no explanation for this other than God’s unique personal involvement.

• Why has Israel been effective and successful? I believe it’s because, at the roots, there is the faith that you were here by God’s hand and not your own. If you keep that, I believe God’s blessing is so enormous that no hand will ever be able to come against you. I truly believe that, and believe as many of my fellow Christians do, that those who bless Israel will be blessed, and those who curse Israel will be cursed. I would tell anybody in the world, ‘Say what you will about Israel, but I’d never bet against her.’

• Israel is a very special place. We must be mindful, respectful, and never be bashful about saying to the world that God’s hand is upon Israel. No one in Israel should ever be afraid to boldly proclaim that the foundation of this country is not its politics, but is its faith. Without its faith, it would not stand. With its faith, no one can ever stand against her.

On giving up land for peace, a two-state solution

The idea that, somehow, Israel can make everyone love them by giving in to their demands is nonsense, because the hate that is expressed toward Israel is not political, it ultimately is spiritual, even if the haters understand it or not. And that’s why it makes no sense at all for there constantly to be this pressure on Israel to give up the tiny little speck of land that it lives in and owns.

I carry with me this little map. The green area represents all the Muslim nations between Asia and Africa. There’s quite a bit of land mass. In fact, so much that you can clearly see the green vs. everything else. What you probably can’t see unless you’re really close to me is that right there in that tiny little speck, a little bitty red dot, that’s Israel.

Most Americans have no clue what you face geographically. But I hold this up as a reminder that when people talk about a two-state solution, here’s what they’re basically suggesting: That the people to whom God gave this land almost 4,000 years ago, the people who live here and who have rights to this land–not only legally, religiously, biblically, politically, indigenously–those people who have that little red dot should give up some of that red dot, instead of any of those folks in that big green territory giving up anything.

The idea that there should be more surrender of the homeland to bring peace has no basis historically, legally, politically, biblically or indigenously. A two-state solution [Israel and Palestine] is what diplomats propose to keep themselves busy rather than facing the reality that trying to split up Yerushalayim [Jerusalem] is really like asking Solomon to cut the baby in half. Solomon knew better, and we should as well.

• Jerusalem is the undivided capital of Israel, and should ever remain so. The idea of a two-state solution is a diplomatic fantasy, it is never going to happen, and we need to stop talking about it because all it’s done is waste time and money of diplomats who have traveled all over the Middle East and beyond trying to pretend that they were doing something that they’re not doing.

On standing with Israel

• I want to tell you a simple story that I hope will explain why I find it so important to stand with Israel. I hope this speaks, not to your head, but to your heart.

A number of years ago a young father brought his children to Israel for the first time. He wanted them to understand what it was about and what made it unique. He had two teenage sons and an 11-year-old daughter. He took them to Yad Vashem [Israel’s Holocaust memorial and museum] because what better way is there to understand the importance of modern-day Israel and its commitment to never, ever let something like the Holocaust happen again? 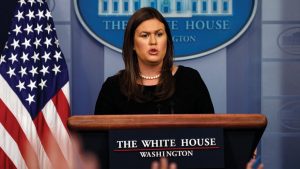 This young father discussed with his wife whether the 11-year-old would be mature enough to understand and absorb the extraordinary and sometimes very emotional experience of Yad Vashem.

(A number of years ago the pictures and the artifacts were far more intense than they are now. And I know many people said it’s just too much. Personally, I think it needed to be strong, it needed to be intense, it needed to evoke an extraordinarily personal, deep emotional reaction from everyone who went through it.)

This young father decided he would take her, but if things became too emotional for her, then he would escort her out. So he took her. And when the little girl saw what was happening to these [Jewish] children, it was hard for her to comprehend and understand how anybody could be so cruel to a child….

The Nazis were so proud of their horrors inflicted upon the Jewish people. We know some of the things that happened to those children [in the Warsaw Ghetto], not because somebody told us, but because they actually photographed the most horrific things they did to kids, such as shooting them for sport in the streets.

It’s bad enough to do something that is that evil, but worse is to be so proud of it that you would actually photograph it because you wanted people to know what you had done. Many children died in the streets because of hunger, deprivation.

The little girl saw these pictures. She didn’t say anything, she just stared at them.

The next part of Yad Vashem depicted the death camps, Dachau, Auschwitz-Birkenau, Belsen-Bergen and the other places that were created with the sole purpose of industrialized, systematic murder of human beings. Imagine an industry with no purpose other than to murder people. It’s hard to even conceive that people would every day go to work and kill 10,000 people, go home and have dinner with their family, read stories to their kids and put them to bed, and then get up the next day and go kill 10,000 more people. That is the part of the Holocaust that I find the most disturbing….

There are photos that are gut-wrenching, deeply embedded into your soul and into mine. Pictures of the thousands and thousands of human bodies stacked so high upon each other and no longer even looked like human beings, but like sticks of lumber that had been stacked. The horror of it.

The father had hoped his daughter would learn something from the experience of going to Yad Vashem, to understand there were many people who never spoke up, who never stopped it. Once the Nazis realized they were going to be able to get away with it because there was so little resistance, they continued until six million Jews and [altogether] over 10 million people had been murdered.

As the father took his little girl to the exit, there was a guest book. The little girl reached up into her father’s pocket, took the pen from his pocket and began to write in the guest book.

The father looked over the little girl’s shoulder to see what she would write and she scrawled her name and address. She paused and then she began to write in the space for comments, words he will never forget: “Why didn’t somebody do something?” It was inconceivable to her that such a thing could happen to the silence of so many. And with that she put the pen back in her father’s pocket and for the next several hours she didn’t say a word.

That father never had to wonder whether she got it. And let me just say to you, I was that father. That little girl was my Sarah. I have brought her back here and one day I will bring all six of my grandchildren to Israel and take them through Yad Vashem as a reminder that somebody always has to do something.

I say to you tonight my daughter is getting ready to take a job in the White House under Donald Trump and will be working in his administration as they take office.

The partnership we have is deeper than political, it is deeper than financial. There is no such a thing as a life without value, a life that does not deserve the respect to be treated as a human being. It’s why the value system that we hold, in your country and mine, is one that values law, and justice, and that elevates and holds accountable, all of us equally under the law. It’s what separates us from savagery. And it’s also what brings us together in a partnership that we need to preserve, protect and pass on to our kids and to our grandkids.

I pledge to you that my commitment to you in Israel is one that is born with a deep sense of understanding that mutual bond of friendship and values, and I will continue to fight for that. Thank you and God bless you.

Previous Do Jews have too much power and influence?

Next Israel: Three miracles of God