Forty years ago, I opened a book by the Christian theologian Francis Schaeffer and was struck by a quotation from the British journalist William Norman Ewer (1885-1977):

How odd of God
To choose the Jews

The mocking tone of the epigram seemed to suggest God had made a mistake. Schaeffer added these words, which are often wrongly attributed to others:

In a few lines, it summed up the battles we have been fighting at Lema’an Zion on behalf of the Jewish people since 1972. It is a war we have fought using the Bible, history and human rights as our “weapons.”

Throughout the free world, Jew-hatred is in the mainstream today. Some forms of anti-Semitism, however, are far more treacherous.

In the US, one of the most prominent Democrats is Arab Muslim Linda Sarsour. A forceful feminist and fierce critic of Israel, she supports the boycott-Israel (BDS) movement. She is also a member of the Democratic Socialists of America.

On July 5 this year, she tweeted to her three million followers, “Jesus was Palestinian of Nazareth and is described in the Quran [Ed.: Koran] as being brown copper skinned with wooly hair.” A volcano of protest erupted.

The attempt to expropriate Jesus for the Palestinian cause is not new. There have been many Palestinian-Arab statements since the rule of Yassir Arafat declaring Jesus a Palestinian, not a Jew.

What is new is the many efforts from within the Jewish community to reclaim Jesus into the Jewish fold. Jews in general consider Jesus, though born Jewish, the founder of a non-Jewish faith, Christianity. 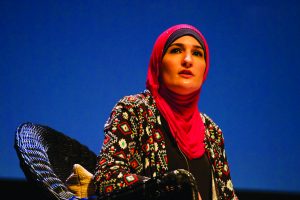 Dr. Seth Frantzman called the Palestinian manipulations “a negation of Jewish history and a modern-day attempt at replacement theology: to replace historical Jewish connections to the land 2,000 years ago, recreating an imagined history of Palestinians in place of Jews.” (The Jerusalem Post, July 8, 2019)

He accused such revisionists of blending theology with nationalism and reiterated that the “‘Jesus was Palestinian’ claim….is only made to erase the Jewish history of the Land of Israel.”

Even in the Quran, Frantzman points out, Jesus is “seen as a messenger to the ‘Children of Israel’ and an adherent of the laws of Moses. He is linked to the line of Abraham, Isaac, Jacob and the Tribes of Israel, as well as kings of David and Solomon.” In other words, Jesus is a Jew!

Four days later, fellow editor at the Post, Liat Collins, went a step further, writing: “This is not just about Jewish history. This also, not so subtly, alters Christianity’s context. If Jesus is no longer a Judean Jew but a Palestinian, and the Temple is no longer Jewish, but was somehow a Muslim holy site even centuries before the birth of Muhammad and Islam, where does that leave the New Testament as well as the Bible?”

Any pastor would agree with these words. Even more, the attempt to re-assign Jesus as a Muslim prophet rather than the Christian Messiah discredits Christian faith.

Jews are under attack, have been persecuted for centuries, and even their history is being questioned, but they will endure nonetheless.

As Sarsour was making her fake claims, in Jerusalem a newly excavated roadway was inaugurated for the first time in two millennia. Leading from Jerusalem’s City of David up to the Temple area, this was the historical passageway where millions of Jews ascended to celebrate Pesach (Passover), Shavuot (Feast of Weeks) and Sukkot (Feast of Tabernacles). It is another proof of the connection of the Jews to the Bible.

The nations plot and rage: “They encourage themselves in an evil matter: they speak in order to lay snares; they say, ‘Who will see them?’ They search out iniquities; they accomplish a diligent search….” (Ps. 64:5-6 [6-7]).

Man plans, but God laughs. His choices are sound. There’s nothing odd about that.

Previous “Say Little, Do Much”

Next Seeing and not seeing