From sorrow to joy: 48 hours in Israel

Two consecutive days on the Israeli calendar, days of commemoration, give insight into the heart and mind of the modern Jewish nation. They convey fundamental values and reflect a unity in Israeli society, despite outward religious and political division the news media routinely publicize.

The two days are Yom Hazikaron (Memorial Day for the Fallen) and Yom Ha-atzma-ut (Independence Day).

The mood of each day is vastly different from the other, and the transition from one to the next is abrupt: From sorrow to joy.

Israel comes to a halt

Memorial Day begins with sirens blaring nationwide for one minute at eight in the evening. During that minute, all stand silently–at home, on the street, on a bus–to honor the 24,000 fallen soldiers and 3,500 victims of terror, to share the grief and reflect on the price paid for our freedom and safety. All vehicles stop, even on highways. Drivers and passengers get out and stand.

Restaurants and places of entertainment are closed for the day. Regular TV broadcasts are replaced by the national Memorial Day ceremony, followed by recitation of the names of the soldiers who died in Israel’s wars. Biographs of individual soldiers are shown. Radio stations play somber, reflective music.

At 11 the next morning, the sirens sound again. In schools, children wearing blue and white stand too. Memorial ceremonies are held throughout the land at public venues. Military cemeteries are visited by throngs of people. Twenty-four hours of remembrance.

Our hope does not die

My son Akiva and I attended one ceremony in Jerusalem, together with hundreds of other Israelis, old and young. Two women stepped up to the podium to lead the program. 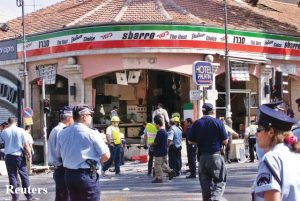 One of the women was Chaya Schijveschuurder. On August 9, 2001, Chaya and her family were in the Sbarro Pizzeria in downtown Jerusalem when a bomb exploded, killing 15 and injuring 130. Among the dead were her parents and three siblings. Chaya, just eight years old, was badly injured. Her five family members were buried the next day.

Chaya spoke confidently now as she narrated and introduced other speakers, all survivors of attacks or relatives of victims. At the end of the program, everyone stood to sing Israel’s national anthem Hatikvah (The Hope).

It was followed by another song, Ani Maamin (I Believe): “I believe with perfect faith in the coming of the Messiah, and even though he tarries, still I wait for him each day, for his coming.” Now Chaya cried, but she finished the song, almost defiantly, as if to say, “No matter what the enemy does to me, I still believe.” Or, “No matter what God allows to test me, I still believe.” Like Abraham who, at that moment when he was ready to sacrifice Isaac, still believed in God’s promise that Isaac would continue the lineage of blessing after him.

As Akiva and I returned to our car, we passed by several schools where crowds of children and parents were attending similar events.

How do Jews react?

You might think families struck by tragedy through terror seek revenge or are filled with hatred. Not necessarily.

The parents of Malki Roth (15), who was also killed in the Sbarro bombing, started a foundation in her memory to help children with disabilities. Their foundation helps hundreds of children across Israel, regardless of religious affiliation.

Shoshana Grunbaum, pregnant with her first child, was also killed in the pizzeria. After her murder, her husband Shmuel wrote a book, A Daily Dose of Kindness, to inspire people to behave more kindly to each other. He also started a daily newsletter to promote kindness, which had over two million subscribers.

How do our neighbors react?

Not all Arabs condone terror attacks, of course. But mass-casualty terror attacks against Jews often result in a party atmosphere, where sweets are handed out on the streets of Gaza and the Palestinian Authority (PA).

Hamas-ruled Gaza and the PA regime under Mahmoud Abbas support terror. Palestinian school books incite against Israel’s existence. Terrorists are treated as heroes to be emulated, with streets, city squares and schools named after them. Families of terrorists arrested or killed receive monthly pensions. Ten percent of the PA’s budget goes for such “pay-for-slay” payments.

On September 23, 2001, six weeks after the pizzeria bombing, the Palestinian university Al-Najah in Nablus held a celebration of the anniversary of the first Intifada (the Palestinian uprising against Israel). As part of the commemoration, a room-size exhibition was erected to celebrate the Sbarro bombing. It included a recreation of the pizzeria, including broken tables, fake blood and body parts. Only after the exhibition became known to the international press did the university shut it down.

Someone may think Israel has an obsession with death due to the many memorial ceremonies. There is even a separate Holocaust Memorial Day. It is the exact opposite. We are obsessed with life.

That is why Israel’s Magen David Adom (MDA, equivalent to the Red Cross) and similar organizations are located all over the country to help when tragedy or disaster strikes. Teams are trained to deal with the aftermath of terrorist attacks. That is why Akiva just finished a course as a youth volunteer for the MDA, along with hundreds of other teenagers. They volunteer around the country, including serving in ambulances, sometimes under dangerous circumstances.

That is why Israel is among the first nations to send search-and-rescue and emergency medical teams to disasters around the world to help save all lives, not just Jewish lives.

That is why Israel has by far the highest birthrate among Western nations and why Israelis, even with all the threats they face within and without their borders are, according to international surveys, among the happiest and most satisfied with their lives.

That is why Israel traded 1,027 prisoners charged with various terror-related offenses for one Israeli soldier, Gilad Shalit, who was being held by Hamas.

It is, in fact, the terrorists who are obsessed with death. It is they who praise Allah when they kill children. It is the universities that allow recreations of terrorist bombings, including fake blood and body parts. And it is the regimes that sponsor terrorism through pay-for-slay pensions.

A new day: The mood shifts

As night fell, the closing ceremony for Memorial Day ended with prayers, Bible readings and a solo bugle playing the military melody for mournful tribute.

Promptly at eight, the Israeli flag was raised from half-mast to the top of the flagpole and the national Independence Day ceremony commenced with loud fanfare, singing, dancing and fireworks.

My wife Leorah and I had been invited to the ceremony on Mt. Herzl in Jerusalem this year. Security was extremely tight due to the many government ministers, Knesset members, military officials and diplomatic staff attending. We were among 5,000 invited guests.

Twelve Israelis from different walks of life were honored for their outstanding contributions to Israeli society. Each one took a torch and lit a flame. Twelve flames representing 12 tribes.

Then began precision marches by the various branches of the Israel Defense Forces accompanied by the military orchestra. Each branch was represented by its own flag. I imagined the Children of Israel in the wilderness as they advanced, grouped according to tribes and under their own banners (Num. 10).

Throughout the country, government offices, businesses, private homes and even cars are festooned with Israeli flags.

The Bible: A National Treasure

One of the most popular highlights of Independence Day is the televised broadcast of the annual International Bible Quiz sponsored by the government for middle and high school students from around the world. The questions are difficult, testing accuracy and memory of about 400 chapters of the Tanach, the Old Testament. David ben Gurion, Israel’s first Prime Minister, instituted the Bible Quiz. Though he was secular, he enjoyed studying the Bible.

That is no surprise. I have often sat in a taxi in Israel and the driver, not obviously religious, initiated a discussion that somehow led to a biblical subject. You often see people on a bus praying their morning prayers or studying a biblical or religious text. It is not that everyone is devout, though many are.

It is noteworthy that each Israeli soldier is given a Bible during his or her swearing-in ceremony. When my three oldest children finished primary school, they too received a Bible.

On the path of prophetic fulfillment

Israel is an imperfect nation like all others. But the anecdotes above do show faith and knowledge of God’s Word is there and remains a constant element within Israeli society. Where else are Bibles still treated as desirable reading in schools, in the military or in general? By contrast, most other Western societies are today rejecting biblical values and morals. And with what have they been replaced?

Israel exudes national pride, optimism and hope that are rare today. Its commemoration of the fallen reveals a familial closeness between most Israelis. Its celebration of nationhood is a celebration of God’s faithfulness.

From its reconstruction to its agricultural exploits; from its immigration statistics to even its crowding problems; even the fact that weddings again occur in Jerusalem. All these are signs that Israel is on a path of prophetic fulfillment. His Word is present in our daily lives in Israel.

Previous What is this obsession of the world with the Jews and Israel?

Next A Jerusalem idyll interrupted by alarm