Son of Israeli PM speaks out

Israeli Prime Minister Benjamin Netanyahu’s son, Yair, has developed a social-media following due to his reputation for being bitingly blunt. Oft-quoted by the news media, he recently took Ahmed Tibi, the notorious Arab member of the Israeli Parliament, to task for his stream of criticisms of Israel (as reported by Arutz Sheva, November 25, 2018):

“I want to remind [him] that all the Arab communities in Israel without exception sit on the ruins of ancient Jewish communities, and often preserve the previous Jewish name.

“For example, the village of Battir sits on the spot where the last battle of Bar Kochba and the Romans took place, Beitar. The Arabs themselves call the archaeological hill in the village Khirbat el-Yahud [‘ruin of the Jews’ –Ed.]. The Tibi family came to Israel from Syria. We are called Jews because we came from this country, Judea. And you are called Arabs because you came from another country, the Arabian Peninsula.”

Orthodox Rabbi Mendel Kessin, a specialist on the End of Days, commented on Israel News Talk Radio last November about the rise of anti-Semitism worldwide. He stated anti-Semitism is a signal that God is quickening the end times.

“We are very close to the end….And what you’re seeing now unfolding is a process that will bring the Mashiach [Messiah]….

“What you’re looking at, in many ways, is an acceleration of the end, just like it happened in Egypt. What God seems to be doing is rushing up the end, therefore there are so many things going on simultaneously.”

“As we approach the Messianic era, anti-Semitism will rise,” he explained. “This is because Satan…[is] trying to bring in all the energy he has in order to do away with the Jews.

“When holiness is about to enter, then evil and corruption energize and try to stop the entry of righteousness,” Kessin elaborated.

He connected the chaos of what’s happening on the political map today to the End of Days War of Gog of Magog.

He further pointed out the contradiction between a rise in anti-Semitism on the one hand and “an incredible rise in the stature of Israel among the nations,” on the other. “It’s not just anti-Semitism. Israel is rising among the nations. They are gaining incredible respect. Economically they are now spread out–Africa, Asia, India. Even Europe is beginning to turn against Hamas” (Breaking Israel News, Dr. Rivkah Lambert Adler, November 29, 2018).

Going where no Israeli has gone before

Israel is no winter-sports powerhouse, but it does have a bobsled team. The team is attempting to qualify for the 2022 Winter Olympics, despite the odds being against it. But the indomitable Israeli spirit means never giving up.

On November 29, 2018, at qualifying races in Lake Placid, New York, Israelis Chaim Raice, 46, and Dave Nicholls, in his 50s, met for the first time. For Raice, it was his first time in a two-man bobsled. Nicholls, a 14-year veteran, has spine damage from a skiing accident and needs a wheelchair to get around. During a practice run, he flipped the bobsled over and broke several fingers. Still, they completed the race on December 1, 2018, ending up in 11th place in the event (Times of Israel, December 13, 2018).

Fly me to the moon! 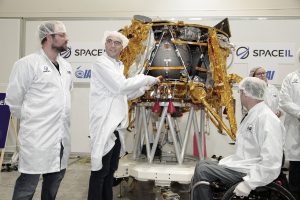 Sometime in February, Israel Aerospace Industries and the SpaceIL group will launch the first non-governmental spacecraft to the moon, reports United with Israel (December 18, 2018).

The spacecraft, Beresheet (“Genesis–In the beginning”), will launch from Cape Canaveral in Florida and land on the moon days later. Inside will be a time capsule containing a Hebrew Bible and an Israeli flag.

The British press is known for its highly critical reporting about Israel. When the Hamas terror organization in Gaza fired 460 rockets at Israel during just one week last November, the UK Telegraph’s Raf Sanchez reported about Israel’s response.

Surprising everyone, his tweeted comments praised Israel for its restraint: “We got a sense of how careful Israel was to avoid civilian casualties during the airstrikes in Gaza. The Israeli army called one guy we met and spent 45 mins on the phone with him, getting him to evacuate his neighbours, before they blew up a Hamas media building next to his” (@rafsanchez, November 15, 2018).

The governments of many nations from South Africa to Sweden have been hostile to Israel for many years. But world events can change alliances. Threats from Iran and fear of cyber warfare have made many nations pursue contact with Israel under friendlier terms than have been seen in decades. It may, however, be a temporary respite for Bible prophecy warns of a time when all the nations of the earth will turn against Israel (e.g. Zech. 12:3).

Australia has recognized Jerusalem as its capital. Brazil is moving its embassy to Jerusalem.

With Turkey becoming more repressive and threatening its neighbors, Cyprus and Greece are collaborating with Israel in numerous defense and energy fields.

Czech President Miloš Zeman visited Israel, one of a long list of heads of state who have made official visits in order to sign agreements, discuss security matters and boost trade.

Australia, Belgium, Britain, Denmark, Germany, Holland, Norway, Switzerland and the US have all reduced funding to the Palestine Authority after learning the funds were being used to sponsor terrorists and their families.

Russia and Israel are coordinating their efforts in Syria to maintain order in the volatile region.

Across the Muslim and even Arab world, there are calls for normalization with Israel. Cabinet ministers, party heads, journalists in Bahrain, Chad, Kuwait, Oman, Qatar, Saudi Arabia, Tunisia, the United Arab Emirates, even Lebanon, are calling for contact with Israel. The reasons for it vary: The mutual threat of Iran, the desire for Israeli technology, the declining importance of the Palestinian conflict.

Chad, Egypt and Oman have each permitted Israeli commercial planes to fly through their airspace.

Three delegations of local Sunni and Shiite Muslim leaders from Iraq visited Israel in recent months to meet with officials.

Next How Christians should relate to Israel: Psalm 117 – A guideline