Breaking the Mold: An Arab Soldier in the Israeli Army 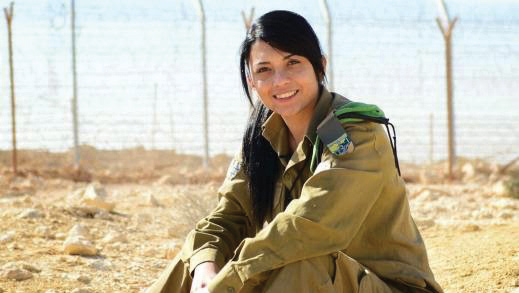 – I came to serve my country and my home

Mona Liza Abdo is not to be confused with the famous Leonardo da Vinci painting of a smiling girl. This one is an Arab citizen of Israel. Although not obligated to serve in the Israeli army, she chose to become an Israel Defense Forces (IDF) soldier.

“My name is Mona Liza Abdo. I’m an Arab-Christian from Haifa and a fighter in the IDF. I joined the IDF because I’m an inseparable part of Israel. I came to serve my country and my home.

“My job as a commander in the IDF is to prevent terrorist attacks, smuggling operations and illegal entry into the country. I think if I prevent drugs from entering the country, I protect the Jewish people, but the Arabs as well. I protect every small child in the State of Israel from exposure to drugs.

“If I could roll back the clock to three years ago, I would choose the same unit, but I’d strive to accomplish a lot more. All my life I learned in a Jewish school. At age 17, everybody received their conscription [draft] notice, but I did not.

“I said to my mother, “Mom, I want to enlist.” I had heard that very many Bedouins [a Muslim-Arab community] join the army and serve the country, even if they don’t have to, so I thought that maybe the IDF would accept me too.

“So I tried. I went to the draft center, and one of the commanders there was Druze [an ethnic group with Muslim roots]. He helped me a great deal during the enlisting process and really motivated me.”

Mona Liza’s mother, “Aisha,” speaks as if she were a spokeswoman for Israel. She is proud of her daughter and believes she has chosen the right path.

“When my daughter came to me and said, ‘Mom, I want to enlist in the army and serve our country,’ I was very surprised.

“I did not know how to express my happiness because it was so mature of her. It was a great surprise and brought a lot of joy for the whole family.

“I recommend all young Arab boys and girls enlist in our army–for our land and country. This is our state and our home. Here we live and here we will die. The roots of our fathers and children are here.

“To all the young people out there, I say: The army is a university. I mean it’s not just an army, but also a place to learn and be part of a new family.”

“I keep the country of Israel safe, not only for the Jews, but for the Arabs, too, and I would sacrifice my life for the sake of the State of Israel and all its citizens.”
(youtu.be/kGv9mym3Sqk; Translated from Arabic)

Next A special warmth for Jerusalem amid a cauldron of hate