Balaam then and now

The story of Balak and Balaam in the Book of Numbers is a most unusual one, and not just because it involves a talking donkey.

Numbers is about the history of the Children of Israel and religious instructions they received during the wanderings from Mount Sinai to the Promised Land.

One episode, however, taking up three whole chapters, has two non-Israelite characters take center stage, with Israel only passively involved. It is a drama atop the mountains of Moab: Balak’s repeated and unsuccessful attempts to get Balaam to curse Israel. It is not even clear the Israelites encamped below were aware of these goings on at the time.

Why do we need to know all these details about Balak’s fears, his reasons for hiring Balaam, the back-and-forth negotiations, and ultimately, failed attempts to curse Israel? Who cares about the Moabites except a Moabite?

We don’t get this lengthy treatment of the deliberations of other enemies of Israel, such as the Amalekites.

What is behind this story? We need to read the cues. They contain two messages: 1) For Israel, a confirmation of God’s faithfulness to His pledges to Abraham. 2) For the nations, a warning to those who dare curse Israel.

Here are the cues:

What was Balaam? A diviner, a sorcerer? Yes, but he was also a prophet, a messenger of God. Who else was a prophet in those early days? Abraham. God Himself called Abraham a prophet when He spoke to Abimelech, King of Gerar, in a dream (Gen. 20:7).

Echoing Pharaoh a generation earlier, King Balak feared the Israelite masses in the plains below (Num. 22:3-4). Balaam reiterated that concern to God (v. 11). But that fear serves to remind us God had promised Abraham abundant progeny (Gen. 15:5), a promise now fulfilled.

Balaam’s eyes were opened by God and he beheld the angel that previously only his donkey saw (Num. 22:31). Abraham raised his eyes and, “behold,” he saw the ram in the thicket during his encounter with the angel (Gen. 22:13).

Balaam was from the city of Pethor (Num. 22:5) in the land called Aram Naharaim in Hebrew (Deut. 23:4 [5]), Mesopotamia in some translations. When Abraham sent his servant to “my land and to my kindred” to find a wife for Isaac, his obedient servant went to Aram Naharaim (Gen. 24:4, 10).

These elements in the story of Balaam hinting at details in Abraham’s life are no mere coincidence, but rather, deliberate cues. Consider one more proof: The blessings that Balaam pronounced atop the mountains contain the same promises made to Abraham generations earlier.

Speaking euphemistically of Israel’s vast number, Balaam referred to “the dust of Jacob” (Num. 23:10). Abraham was told his progeny would be as innumerable as the “dust of the earth” (Gen. 13:16).

Finally, the clincher. Balaam said, “Those who bless you are blessed and those who curse you are accursed” (Num. 24:9). This is an almost verbatim quote of the memorable promise God made to Abraham, “I will bless them that bless you and curse him that curses you” (Gen. 12:3).

What do these parallel cues mean? To remind Israel of God’s promises to Abraham and His faithfulness.

Why now? Though all Jews should view themselves as having experienced the Exodus and heard God’s voice at Mount Sinai, the Israelites in our story are, in fact, a new generation, not eyewitnesses to earlier wonders. The old generation had died in the wilderness.

Now they were at the cusp of entering the Promised Land, but without Moses. No doubt, many felt trepidation and uncertainty about the future. Powerful Canaanite enemies in the land. They would have to settle and build. No more manna from Heaven. Now they would plant and harvest, subject to the seasons and elements.

Confirmation now of God’s promises to Abraham centuries earlier was a powerful, encouragement to this new generation about to enter the land.

But why make it so complicated? Why speak in riddles or hidden messages? That is precisely the point.

We have a story ostensibly about a nation trying to curse Israel, but the reality is God is in control, working the whole time, sometimes openly, sometimes in the background, to fulfill His plan. These cues, key words and events, subtle to some but obvious to the Hebraic ear, served to remind that generation and later generations of God’s faithfulness to His people, no matter how bleak the situation seemed on the surface. His covenant with Abraham is eternal.

This literary device of cues occurs frequently in the Bible, revealing levels of meaning, though translations often dilute their effect.

He claimed God but hated Israel

What message is this for the nations? For the many Christian friends of Israel, who align their prayers, hopes and wishes with God’s plan for Israel, it is also a tremendous encouragement, proclaiming God’s faithfulness.

There is, however, a warning implicit in the story of Balak and Balaam.

Balaam claimed faith in God: “I cannot transgress the word of the LORD my God” Num. 22:18. He pronounced God’s blessings upon Israel and, according to the rabbinic commentator Nachmanides, even prophesied about the coming Messiah, yet Balaam was evil. The New Testament likewise portrays the corruption of Balaam (2 Pet. 2:15; Rev. 2:14).

He spoke with God and God with him. The Spirit of God was upon him (Num. 24:2). He heard “the sayings of God” and knew “the knowledge of the Supreme One” (24:16). He said only what “the LORD puts in my mouth” (23:12). Those were momentary experiences, however. Balaam still acted contrary to God’s Will.

Outwardly, he claimed fidelity to God, but inwardly he hated Israel and wanted to curse. The same mouth that blessed was used to injure. He caused Israel to stumble in idolatry by advising the Midianite and Moabite women to seduce the Israelites (Num. 31:16). As a result, 24,000 Israelites died in a plague.

Balaam is alive and well today. There are spiritually insightful people, religious leaders, who profess faith in God, claim knowledge of God, claim having the Spirit of God on them, quote the Bible and use their pulpits, platforms and media networks to condemn and curse Israel. Maybe they are as they claim to be. God knows.

Some gather at the Bethlehem Bible College biennially under the banner Christ at the Checkpoint to underline their support for the Palestinians and their criticism, even delegitimization, of Israel. Pax Christi claims to spread nonviolence in the spirit of the “peace of Christ.” They issue statements condemning Israel virulently, but provide a public-relations smokescreen for Palestinian terrorists and rioters who use grenades, guns, firebombs, IEDs, kite and balloon incendiary devices against Israel. Peaceful demonstrators? Surely, the Latin word pax (peace) and the use of grenades are mutually exclusive.

They can be pastors of megachurches and world-renowned evangelists, or directors of theological seminaries in any denomination. Leaders of large Christian organizations, such as World Vision, support Palestinian claims, bemoan close US-Israeli cooperation, and evangelical support for Israel. The World Council of Churches regularly vilifies Israel, while categorically sympathizing with the Palestinians. 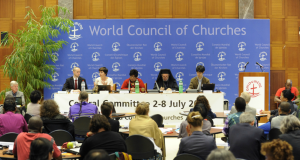 Like Balak, they consider the Jews interlopers, invaders, colonists. Like Balaam, they want to isolate Israel and cause injury. Weaken it economically. They call for boycotts of Israel and support an anti-Semitic BDS movement, whose founders state explicitly they seek Israel’s destruction.

Like Balaam, who connived to push Israel out of God’s grace and make it vulnerable, they preach that Israel long ago was out of God’s grace and has been replaced. Some, such as mega-pastor Andy Stanley of North Point Community Church in Atlanta, Georgia, advise Christians to do away with the Tanach, the Old Testament, as a source for faith, inspiration or teaching. It is no wonder that supersessionism (replacement theology) is making a comeback in some circles.

The case of Balaam proves that despite seemingly impeccable spiritual qualifications, they were no guarantee against false doctrine. He wanted to curse. But God did not listen (Josh. 24:10). Balaam sided with the enemy, the Midianites, and his end was destruction together with the five kings of Midian (Num. 31:8).

In contrast, tens of millions of Christians worldwide today reject the spirit of Balaam and actively support the return of the Jewish people to their ancient land.

And tens of thousands of Jews return home to Israel each year, assured the promises made to Abraham millennia ago still apply today. This is the underlying, inspirational message of the story of Balak and Balaam.

Previous What’s in a name?

Next Imagining the unimaginable