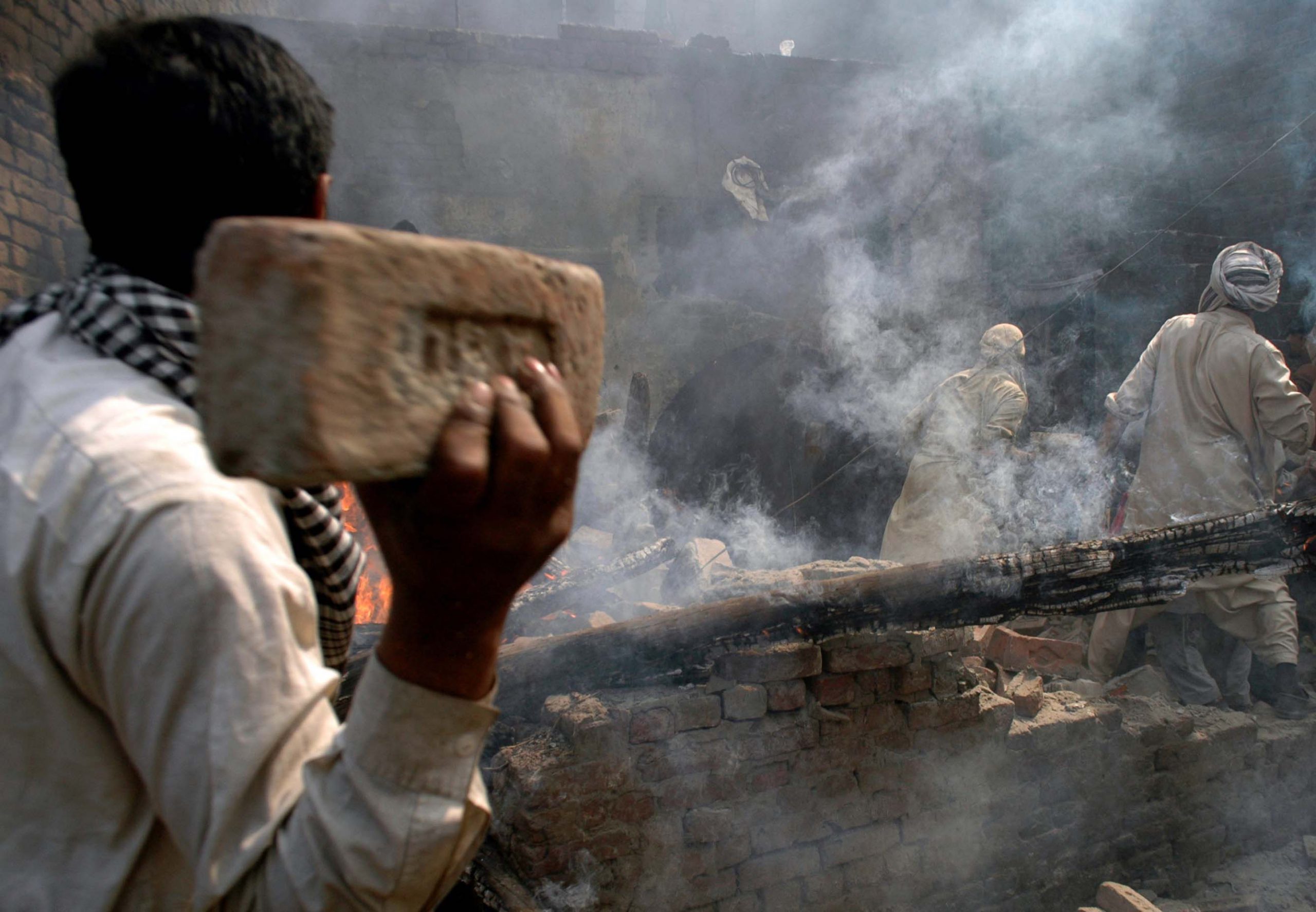 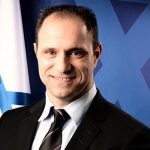 The chairman of the Aramaic Christian Association in Israel, Shadi Khalloul is also a representative of Arabic-speaking Christians and a parliamentary candidate in Israel.

Christians in the Holy Land, Judea and Samaria–what today is called the West Bank or the Palestinian Authority (PA)–are, with the Jews and assorted Arabs, the indigenous people of the land. The region has been inhabited by Jews and then Christians for nearly three thousand years; until the seventh century, Muslims did not even exist.

After the conquest of Jerusalem by Muslims from the Arabian Peninsula in 637AD, the Jews and early followers of Christianity were forced either to convert to Islam or accept the rule of sharia (Islamic religious law) under the Islamic Caliphate, with its dhimmi laws designed to remind you that you are inferior. In Islam, dhimmis are non-Muslims–and therefore second-class, barely tolerated residents–who live under separate, harsher, laws and have to pay protection money (a “tax” called the jizya) to safeguard their lives and property.

These laws are imposed by Muslim conquerors against all “infidels,” both Christians and Jews, in all occupied areas, and are still valid under different guises today in Gaza and in the Palestinian Authority. 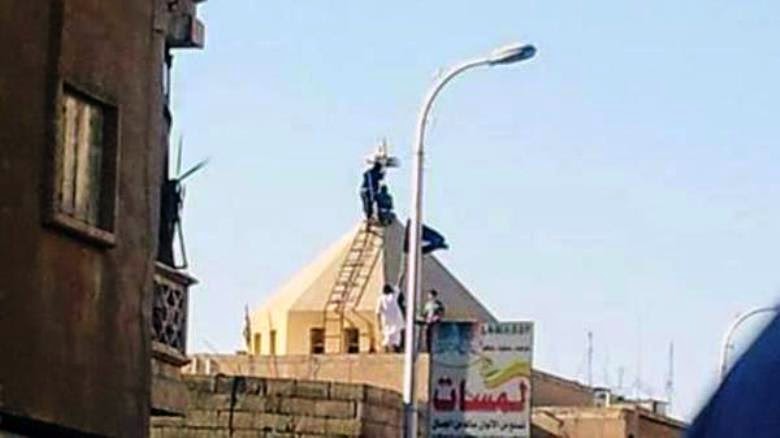 Cross being removed from the Armenian Church in Raqqa, Syria

In Syria, ISIS recently sent out an Islamic decree ordering Christians in Al Raqqa to pay a tax of around half an ounce (14g) of pure gold as part of these dhimmi rules, the same as in the earlier Muslim conquest of the Middle East.

In Gaza, Christians are persecuted by Islamic groups and the Hamas government. Rami Ayyad, a local Christian who owned a bookshop, was assassinated for refusing to close it. 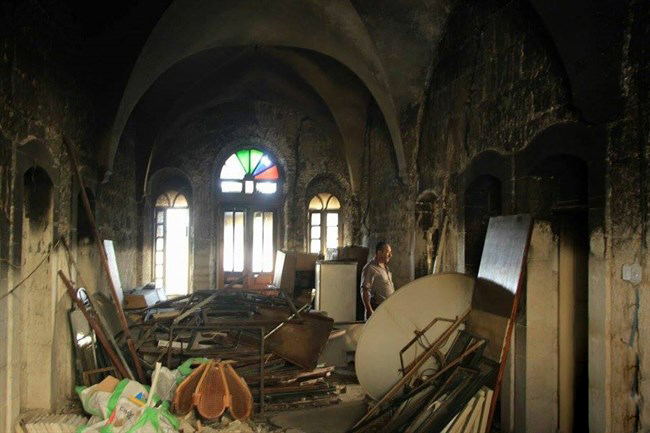 A fire erupted at the Maronite St. Charbel Monastery in the Wadi Maali neighborhood of Bethlehem in the occupied West Bank

In Bethlehem, in the West Bank, the Saint Charbel Monastery was set ablaze on October 8, 2015, and the car of the Jerusalem Latin Patriarch was attacked by Palestinian Islamic extremists last Christmas Eve. Luckily, we have Israeli soldiers at Rachel’s Tomb who intervened to stop the Palestinian attackers.

Now, what was the role of the Jews in all these attacks? The answer is: nothing.

With that said, we did not hear the local Christian media speaking out against this persecution and discrimination. Muslim groups certainly did not condemn these attacks. We heard silence from the majority of Palestinian Islamic society.

On the other hand, we hear loud outrage among local Christians when some fanatic Jews, who in no way represent Israeli Zionist values, and whom the Zionists subsequently arrest, damage a monastery.

Why didn’t Christians react to both crimes equally?

Dhimmitude was once forced on both Jewish and Christian communities under Islamic sovereigns and states. The Jews now have their own strong democratic country and feel safe. Many Christians in Arab countries and in the Palestinian Authority (PA), however, without a state or anyone else to support them, are still behaving as dhimmis and paying lip service in exchange for protection in their original homelands.

At a recent conference called “Christ at the Checkpoint,” for example, we noticed Christian dhimmis, ruled by the Palestinian Authority, acting aggressively against the sole democratic state in the region, Israel, where the Christian community is actually thriving. The Christians at “Christ at the Checkpoint” tried falsely to rewrite history. Like good dhimmis, they denied any relation of Jesus to Jewish roots–even though the Last Supper was a Jewish Passover seder–and thereby even to our own Christian roots, and the purpose of God’s appearance as a human on Earth, through the Jewish people, as written in the Bible.

Moreover, the conference’s organizers, like its participants, ignored any current or historic persecution of Christians by Muslims. In fact, by their announcements, they even denied their own beliefs as mentioned in the Holy Bible. The only concern that led them at each step, every second and every moment, was fawningly to satisfy the Islamic Arab majority in its fight against the Jewish state.

Coexistence is not the issue for Christians here, but rather fears for their own existence and total lack of freedom under the Palestinian Authority, as in all Arab states. The PA and other Arab Islamic regimes are smart enough to smell this weakness. They plan activities, pay salaries and fund anti-Israeli Christian dhimmi organizations, in order to make Western Christians believe in the “Palestinian cause”–by which they mean the establishment of another Arab-Islamic dictatorship state with no human rights in it.

Their method is to use Christians temporarily, pitting them against their Jewish brothers, with whom the Christians share the same roots and the same holy books. The Palestinian Authority constitution, in Article 4, states clearly: “The principles of Islamic sharia shall be the main source of legislation.”

If this country is defined as Islamic, it assures Islamic superiority upon all other religions and prevents any person from ever leaving Islam. It is important for the West to understand that all matters relating to human rights and freedom of religion mentioned are irrelevant, and are there just to attract temporary Western support. The Western democratic world–with all Christian churches worldwide–should be aware of this tactic. They should also acknowledge, for their own survival, that Israel has democratically enshrined, and abides by, human rights laws for Christians and all its other citizens. The West should stop funding Palestinian Arabs so easily, and put pressure on Palestinian leaders to assure that they provide human rights, security, equality and freedom for their own people, as well as for the local Christian community. Israel is not the problem; Israel is the solution.

Next From Hizbollah to Israeli army: The extraordinary journey of a father and son