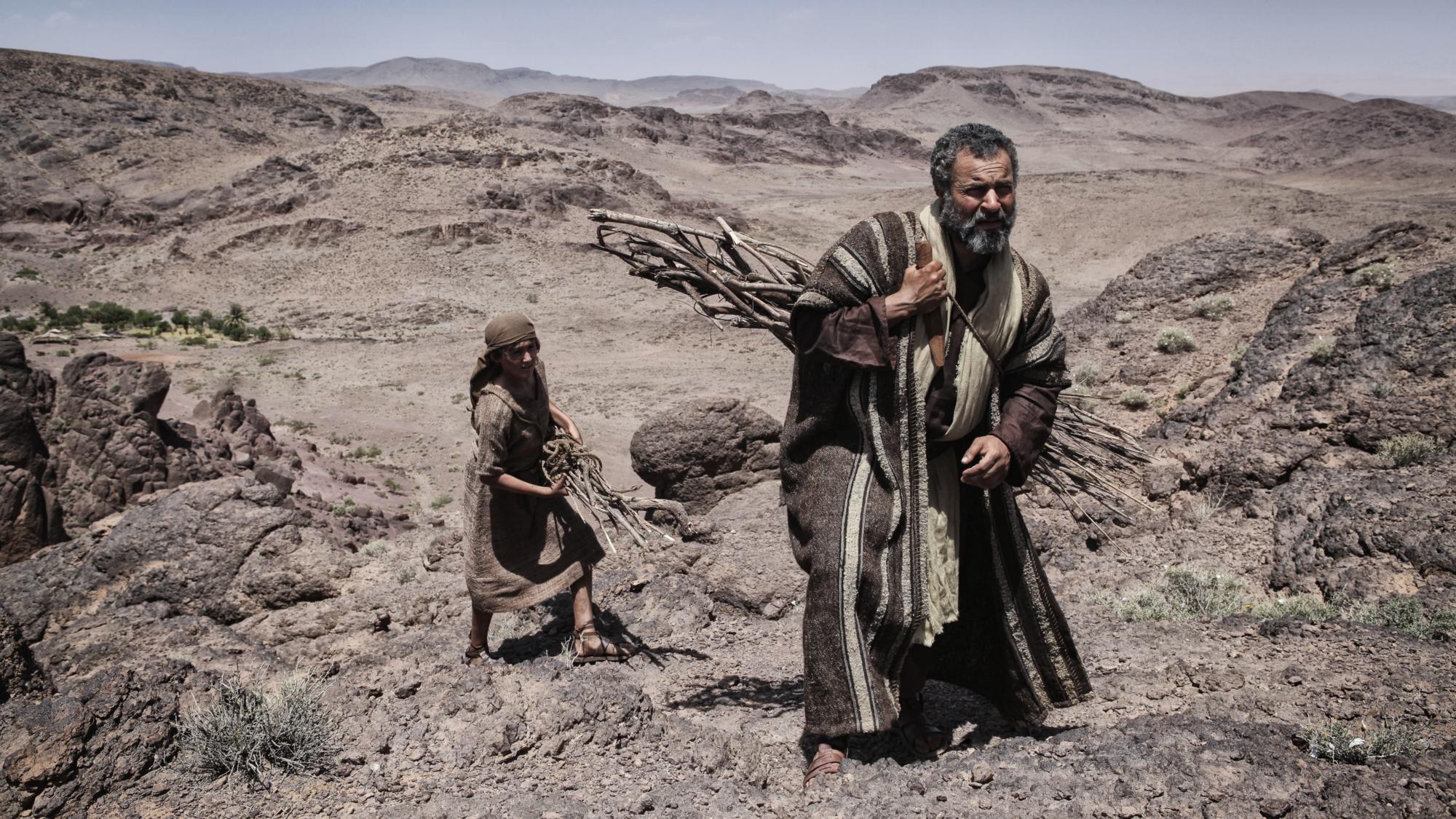 As Abraham raised the knife to slaughter his son Isaac upon the altar, an angel of the LORD called out to Abraham and said: “Do not stretch out your hand against the lad nor do anything to him, for now I know that you are a God-fearing man, since you have not withheld your son, your only one, from Me” (Gen. 22:12).

Christians refer to this episode as the “Sacrifice of Isaac.” In Christian hermeneutics, the event symbolically foreshadows the sacrifice of Jesus as per John 3:16. Jews refer to it as the Akedah (Hebrew for “Binding”) because Abraham bound Isaac, but did not actually sacrifice him. The theme looms large in the High Holy Days supplication prayers in the merit of Abraham’s obedience and Isaac’s silent sacrificial acquiescence.

My purpose is not to give a Rosh HaShanah drashah or a Sunday sermon, but to deal more modestly with these questions: Why did God test Abraham? And why in this particular manner?

It seems that the first question is answered already in the verse quoted above. After Abraham passed this most difficult trial, God now knew he was God-fearing.

“Fear of God” (Heb. Yirat Elokim, also Yirat Shamayim, “fear of Heaven”) refers to the religious attitude of reverence, rather than actual fear or apprehension. Most people avoid what they fear, and that is obviously not what is intended with regard to God. Fear of God is best understood in the sense of a constant recognition of His greatness–awe–with all that entails. It manifests itself in behavior, specifically obedience to His commandments and living according to the moral, ethical and other standards He prescribes. But not just instructions.

Another aspect is living according to His promises–which requires believing and trusting in His assurances. God said, “The righteous person shall live by his faith” (Hab. 2:4).

But had not Abraham already proven his obedience? Had he not already demonstrated his faith? At the age of 75, Abraham took his family and left Haran for Canaan as God commanded. That was obedience and it demanded faith. Later, when God showed him the stars in the heavens and confirmed His promises to him, the Bible states Abraham “believed in the LORD; and He counted it to him for righteousness” (Gen. 15:6).

Why the need to test whether Abraham feared God or not? Can we not assume he did based upon what we already know from early on in the Abraham narrative?

There is a counterpart to fear of God that acts as a foil to it. It frequently holds more sway over people. The iconic man of faith, Abraham, wrestled with it too, namely, the fear of men.

Despite early manifestations of faith, Abraham at times doubted God’s protection and the assurances of His covenantal promises. Twice, he sincerely feared for his life (12:12-13; 20:11). During his sojourns, he suspected the locals who, lacking fear of God, would kill him and take his wife Sarah for themselves. He therefore hid his marriage from them saying she was his “sister,” resulting in confrontations with Pharaoh of Egypt and with the Philistine king Abimelech. Abraham’s concern was justified as in both cases Sarah was taken by the locals.

Rather than calculating how he could finesse his survival in the immoral Egyptian and Philistine societies, Abraham should have acted with faith, believing in God’s promises, in the Covenant. Promised bountiful offspring, he should have known God would not let him be killed by the Egyptians or the Philistines, that is, prior to having children. (Isaac was not yet born.) Also, between the Pharaoh and Abimelech episodes, God had declared to Abraham, “I am your shield” (15:1). And finally, God intervened on Abraham’s behalf, striking Pharaoh, Abimelech and their households with sickness, preventing any abuse of Sarah. At least by the second such event, Abraham should have demonstrated faith.

Misplaced hope in a treaty

On another occasion, to end a dispute over territorial and water rights and to maintain good relations, he made a treaty with Abimelech, even though the land had already been promised by God to Abraham by covenant. Abimelech demanded a treaty to last at least three generations (till his son’s sons, 21:23). 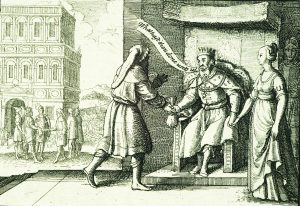 Abraham should have demanded Abimelech keep his marauding shepherds in check without making a covenant that in effect relinquished his right to portions of the Promised Land. The treaty implied Abraham and Abimelech would not infringe upon each other’s territory. Several traditional rabbinic commentators viewed this act by Abraham as a sin.

Abraham, his destiny guaranteed by God, was in a position of strength. Abimelech, on the other hand, was desperately ill. He needed Abraham’s prayer to restore his and his household’s health (20:7, 17-18). Despite this, Abraham agreed to this covenant, subjugating himself to its terms rather than acting with faith in God’s promises. He was making his future peace and success dependent upon a temporary agreement with mortal men and forgetting the superior Divine Covenant.

Though some leftist, modernist theologians speak approvingly of Abraham’s attempt to maintain harmony, and of his exemplary willingness to negotiate and even give up land for peace, a correct reading of the episode reveals the peace treaty was a sham. It barely lasted one generation before the Philistines broke it by plugging the wells of Abraham (26:15-21), forcing Isaac to renegotiate the issue with the very same Abimelech (vv. 28-31). If modernists want to draw political lessons for our times, perhaps this event fits better under the rubric “Chamberlinian naïveté” than “sacrificing for peace.”

The Abraham narrative in Genesis spans 100 years of his life (from age 75 to 175). At first glance, the various episodes seem unrelated and disparate. We may wonder why of many events that must have occurred during those 100 years, the Bible chose to include these. Now, however, we begin to see a theme that stretches from the call of Abraham to the end of his life, one that binds various episodes together. 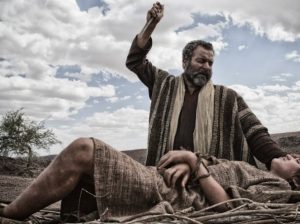 Abraham’s journey of faith was uneven. There were moments of outstanding faith, the crowning event overcoming the challenge of the Mount Moriah sacrifice. In between, however, there were times it seemed Abraham feared men more than God. That is, he acted on his own fears rather than be guided by God’s assurances which nullified any possible mortal threat. The lapses of Abraham’s faith mentioned earlier questioned the very substance of the Covenant God made with him, specifically two issues: 1. The promises concerning offspring and 2. The land.

That is why God tested Abraham with this particular test. The potential sacrifice of Isaac forced Abraham to face his fears frankly and consider the promises of God directly, once and for all. Did Abraham believe in the Covenant? Would he continue to live according to his fears, his human calculations, or would he trust God’s promises? By human calculation, the killing of Isaac would have quashed any chance of Abraham becoming a great nation or acquiring the land, the two issues Abraham had challenged with his fear of men. Isaac was the offspring of promise (17:19), Abraham’s only son (22:2). The future rested on him. Without him, the line would have ended.

On the other hand, if he believed and feared God, and conducted his behavior according to God’s promises, Abraham would know that even defying all human odds and reckonings could not derail the Divine plan.

A lesson for our time

It is certainly appropriate to derive lessons about faith from the events in Abraham’s life. They are well known, true and apply to Jews and Christians. This discussion focuses on fearing God above men. 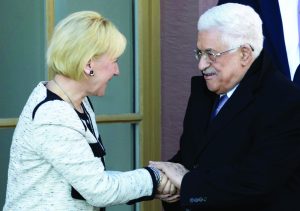 How often do we behave a certain way because we are concerned what others will think or say? But once we are in private we behave as if no one sees. We fear men more than we fear God. That can be true with issues of morality or other matters of obedience of which the Bible instructs us.

I want to draw our attention to fearing God by living according to His promises in a specific example which is especially relevant today. There is an old Jewish principle for understanding the events recorded in the Bible. In Hebrew: “Ma-seh avot siman labanim.” In English: “The deeds of the fathers are a sign to the children.” It means that we look at the actions of our fore-
fathers as a guide for moral, ethical and religious behavior in our lives today. Another view interprets the phrase in a prophetic manner. The events that our forefathers endured will be repeated in some manner in following generations. I think both views apply in the following.

God has not annulled His Covenant with us. Despite 2,000 years of exile, He promised He would restore us to the land. It’s happening now. Still many of us seem to be waffling as did Abraham.

Though many Jews believe in God and in prophetic fulfillment, some are not yet willing to immigrate to Israel. They do not behave in a manner commensurate with their beliefs. Others, who live here in Israel, are willing to give up parts of their God-given land in order to buy a temporary, false peace. Some feel our security is tied to American support, alliances and treaties. Or our economic well-being is dependent on American, European and, increasingly, Chinese trade.

We fear men more than we do God. Rather than building up our land–all of it–with faith in God’s covenantal promises, we succumb to pressures from Washington or Brussels, and freeze the restoration of the ancient cities. Our political leaders fear economic and other reprisals. And, yes, just like Abraham among the Philistines, so also in our region, we do live together with a depraved culture that encourages children to become terrorists who kill and maim us with knives and other means in order to take away what belongs to us.

Ultimately, our humanistic calculations, motivated by fear of men, reading the political winds and shifting sands, will fail, but God will intervene and save us. We need to progress from simply believing to actually living by faith, living according to God’s promises. We don’t need to sign agreements with those who intend to break them, while plotting to take the whole. We can pray for healing for Abimelech, President Barack Obama, German Chancellor Angela Merkel, or even Swedish Foreign Minister Margot Wallström. But our confidence is in God’s promises, not these leaders’ kind assurances or sometimes not-so-kind advice. Jews need to come home to Israel, make Aliyah. We need to build.

The same applies to our Christian friends. I hope they, too, will progress from passive support for Israel to public action that expresses living by faith. Christians who know the promises of God to Israel know they too can be partakers of blessings. The trials of our friends are becoming much more difficult, as they are for Israel. God allows free choice. But whether or not we choose to go to Mount Moriah, God’s plan will not be derailed.

Previous Another Year, but No New Beginning

Next Reports the Mainstream Media Ignore