Situated 640 kilometers (395 mi.) north of Stockholm, a tragic story has been developing in the city of Umeå (oo-may-AWE). Its remote location makes it the most unlikely of places for an outbreak of anti-Semitism, yet it is exactly that which has made the city the subject of hundreds of news stories worldwide.

The eight centuries-old city, its center brimming with ornate, pastel-hued buildings, has 120,000 residents today and is a center of industry and academics in the north.

The Jewish community is tiny, numbering barely fifty people. Umeå University has various Israeli students, however, so the total community nears a hundred.

But the community was subjected to ongoing harassment from left-wing and right-wing extremists. Hitler posters and threats were received, swastikas were posted, windows were shattered. Police protection was limited. Finally in April, fearing for the community’s safety, it was decided to close the center.

On April 23, 400 residents of Umeå, including many Christians and Israel’s ambassador to Sweden, Isaac Bachman, held a rally in support of the Jewish community. Four months later, however, the Jewish Association is still waiting for the city’s help in finding a secure location.

Our timely connection with Umeå

For 25 years, the city had held a Kristallnacht memorial service recalling events of November 9-10, 1938, when Nazis arrested 30,000 Jews in Germany and Austria, 1,000 synagogues were burned, and 7,000 Jewish businesses were damaged or destroyed.

But the commemoration had evolved into a universal anti-racism demonstration. Organizers had even balked at Jewish participation, expressing concern for the “safety of Jewish participants.” The absurdity of Jews being unwelcome at a Jewish memorial service made the news internationally in November 2015.

In a total change of direction in 2016, however, Jewish participation was assured and Dr. Herbert Hillel Goldberg was invited to speak. On November 9, over a hundred people, including dignitaries, politicians and journalists, even Sweden’s national TV broadcaster, SVT, were on hand for a torchlight outdoor memorial service in the city’s market square. Councilwoman Sjöberg told reporters it was the first time a Shoah (Holocaust) survivor had spoken in the city.

Dr. Goldberg told of his own experience, about persecution and the murder of family members. He emphasized that he never sought revenge. Instead, as he had been taught to do by his father, he repaid good for bad. 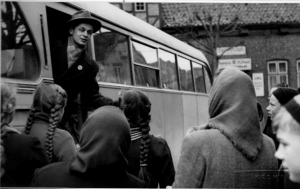 In fact, after WWII he had conducted aid programs to assist tens of thousands of mostly German refugees across northern Germany with railroad freight cars full of clothing and food, and organized free, months-long recreational stays in Sweden for hundreds of young people. Little did they know that the man behind it all was a young Jewish man in his 20s whose own father had been martyred by German hands.

That night in Umeå, we spoke and sang in a large meeting of Christians with a heart for Israel. Weeks later, we gave a sum of money to help the Jewish community so they could continue their outreach programs. 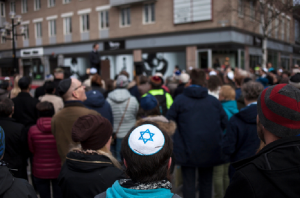 Today, Umeå’s small assembly of Jews is homeless. We pray they will find a spiritual shelter, free of persecution and hatred. But ultimately, at the conclusion of their educational studies or other duties, we know their destination, as for all Jews, is Israel. We welcome them home.

Previous Israel helps – and is blessed