A kangaroo court in The Hague?

Albert Einstein’s famous definition of insanity–doing the same thing over and over and expecting different results–may be cliché, but it rings true. Having failed multiple times since 1948 to destroy Israel on the battlefield, its enemies have focused their efforts on weakening it through economic boycotts and sanctions.

An additional tactic of the war against the Jewish state is the attempt to delegitimize and demonize it in public opinion through
1. historical revisionism,
2. condemnations at international forums, and
3. “lawfare” (warfare by judicial means).
Such campaigns are geared to undermine support for Israel, the only true democracy in the Middle East.

An example of the lawfare tactic is the recent decision by the International Criminal Court (ICC) in The Hague to adjudicate claims of war crimes against Israel over its actions during
1. the 2014 Gaza war,
2. the 2018 “Great March of Return” protests, and regarding
3. its settlement policies.
The petition for an investigation by the Court was made by the Palestinian Authority (PA).

The ICC has been compromised

Goaded on by the Palestinians, including Hamas (though Hamas is a co-defendant in the very same case!), the investigation will only focus on events occurring after June 12, 2014. 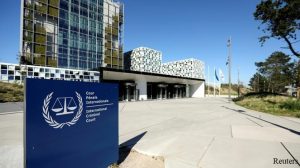 But wait! Why is that day the cut-off? On June 12, three Israeli teenagers were kidnapped and brutally murdered by Hamas terrorists. This precipitated an Israeli operation the next day to arrest Hamas leaders. This led to reprisal rocket attacks and ultimately war. The Palestinian applicants to the ICC picked the start date so the investigation would deal only with Israel’s response, ignoring the cause or context. And the Court accepted that date for the scope of its probe. From the start, therefore, important detail is being excluded by the investigation.

In fact, the ICC is being manipulated as a political tool by anti-Israel parties such as Hamas, who care far less about justice, human rights or even their own image than about the propaganda windfall it will provide if Israel is found guilty of any charges.

The ICC was established in 1998 to try cases involving member states unable or unwilling to investigate alleged war crimes committed by their own citizens. It was to be a court of last resort to hold accountable those who committed war crimes with impunity. Crimes such as those committed in former Yugoslavia, the Rwandan massacres, or by war lords, rebels and leaders in various other countries, come to mind.

Israel, however, is not a member, not having signed the Rome Statute, the treaty that established the ICC and subjects its signatories to its terms. (Neither are the United States and 70 other states). The ICC only has jurisdiction over its 123 member states, not universally. The Palestinian Authority does not qualify as a state according to the 1933 Montevideo Convention, the standard test for statehood in customary international law.

Note that despite criticism levelled at the ICC by Australia, Austria, Brazil, Canada, the Czech Republic, Germany, Hungary, Uganda, the United Kingdom and the United States for its juridical overreach by deciding to investigate Israel, the ICC has not backed down.

Moreover, Israel has repeatedly shown its ability and willingness to investigate charges of crimes committed by its own citizens during wartime.

Israel is no lawless state

Supreme Court of Israel in Jerusalem

The Israeli judiciary is independent. Its highest court is known for being activist. Unlike most Western countries, the Israeli military advocate general reports to the civilian attorney general and the court, not to the Israel Defense Forces (IDF) chief. Cases of abuse or other crimes are investigated seriously. Even Israeli presidents have been sentenced for wrongdoings.

Further, Israel has appointed independent investigative commissions in the past to probe responsibility related to loss of civilian life in wartime. Recall the 1983 Kahan Commission to investigate responsibility for the Sabra and Shatilla massacres. Christian Phalangist Lebanese forces allied with Israel had run amok in a refugee camp in Beirut, massacring Palestinian civilians to avenge prior Palestine Liberation Organization (PLO) atrocities against Christians.

The Kahan Commission members were appointed by the president of Israel’s Supreme Court. While the commission found no direct Israeli involvement, it did assign indirect responsibility to Israel’s Prime Minister, Defense Minister, IDF Chief of Staff, and Director of Military Intelligence, recommending two of them resign (which they did) for their failure to anticipate and thereby prevent the tragedy.

So why the need for an ICC investigation? Many legal experts say it is an attempt by the Palestinians to politicize the ICC for nefarious purposes and the Court has obliged them.

The decision to apply the ICC’s jurisdiction was based on Chief Prosecutor Fatou Bensouda’s pre-trial investigation. Some tout her human rights credentials, yet she is a controversial figure, having served as attorney general and justice minister in The Gambia under President Yahya Abdul-Aziz Jammeh. He took power in a coup and has been accused of numerous serious human rights violations against political opponents, critics in the news media, and those not conforming to strict Islamic moral standards.

There was a high level of collusion between the ICC and the PA. When Bensouda announced on March 3, 2021, the ICC’s decision to investigate Israel, she did not disclose that she had secretly already revealed to the Palestinians her intent to prosecute Israelis for war crimes. Jordanian news sources (Jafra News, March 5, 2020) reported that the pre-trial process to determine jurisdiction was a sham in order to create the appearance of impartiality and protect the ICC’s image.

As noted by Palestinian Media Watch (April 23, 2020), various news agencies, including Jafra News, WAFA (the official PA news agency) and PA TV, reported that Bensouda had meetings with senior PA officials including PA Prime Minister Muhammad Shtayyeh. The late Dr. Saeb Erekat, secretary of the PLO Executive Committee, said on PA TV that the PA helped prepare Bensouda’s case and that Hamas and the Popular Front for the Liberation of Palestine (PFLP), both recognized as terror groups, also participated. A 45-member Palestinian committee established to keep contact with the ICC had six members from Hamas, including the committee spokesman, Dr. Ghazi Hamad.

All of this calls into question the objectivity of the court’s pre-trial jurisdiction determination, as well as the investigation itself. Such politicization will permanently discredit the ICC’s reputation and mission. It will join other international bodies that have been manipulated by the Palestinians for political purposes, such as the United Nations, its Human Rights (sic) Council and other agencies.

Bensouda’s term ends on June 15, 2021, and she will be replaced as chief prosecutor by Karim Ahmad Khan. It is highly doubtful that there will be a change in ICC policy. It would appear, rather, that Bensouda has tried her best to set the ICC on a predetermined course.

In fact, more than any other nation, Israel has adopted new tactics and developed technology to limit or avoid civilian casualties. Air missions have often been cancelled at the last possible moment because drones detected civilians in the target area. Giving up the element of surprise, Israel has warned civilians in target areas by literally tens of thousands of telephone calls prior to carrying out missions. A military legal department has veto power over specific mission targets. No other army in the world has as extensive measures to protect civilians in conflict zones as Israel.

That Israel is often involved in controversy is due to location, not because of careless warfare and bloodlust by the IDF. Unlike Europe or North America, Israel’s civilians are subjected to rocket fire and terror attacks regularly. The enemies next door purposefully place their rocket launchers and depots in residential areas, near schools, mosques and other civilian infrastructure, as is widely known, to discourage Israel’s defensive operations.

Now even Israel’s right of self-defense is being questioned by a tainted judicial process that plays into Hamas’s hands. If Israel won’t target a Hamas munitions depot in a residential area in Gaza due to the threat of international condemnation, it means those rockets and mortars will be fired at Ashkelon, Sderot, Tel Aviv and other population centers in Israel with impunity. That is the very antithesis of the ICC’s declared purpose. And a similar situation is brewing on Israel’s northern border, where Hizbullah has 150,000 rockets pointed southward. Almost every house in Southern Lebanon has become a launching pad.

Regardless of what the ICC ultimately decides, Israel is assured: “Behold, they may indeed gather together, but it is without My consent. Whoever will gather against you will fall because of you….Any weapon formed against you will not succeed; and any tongue that will arise against you in judgment, you will condemn” (Isa. 54:15, 17).

Next Know your faithful ones