A collection of (mostly) good news stories from Israel

Compassion for the sick, Israeli style

What does a doctor do when his patient in a hospital bed is hiding what appears to be a bomb? In Israel, you just continue working as usual. 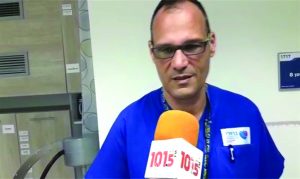 That is what happened when Dr. Eitan Zeidman of Barzilai Medical Center in Ashkelon was treating a terrorist who was shot while trying to infiltrate Israel.

According to Arutz Sheva (June 27, 2018), the doctor noticed “two heavy objects in the terrorist’s pocket.” All staff except the doctor were evacuated from the room. Police and a bomb disposal expert were called, but Dr. Zeidman resumed his work without hesitation.

“There was no issue of feelings here. The issue is to save the person, and there’s no connection between what he did and his medical treatment.”

As battles rage in Syria near the border with Israel, many innocent children are wounded and require emergency treatment unavailable in the war-ravaged country. It is common knowledge across the region that families can turn to Israel for help.

A field hospital erected by the Israeli Army at the border on the Golan Heights is the first stop for Syrians in need of help. From there, they are referred to civilian hospitals for treatment as needed.

Within days of each other, seven Syrians, five of them children, were hospitalized in Israel at no cost.

In the north, two six- and a seven-year-old children in critical condition due to shrapnel wounds were admitted to Galilee Medical Center in Nahariya. The director, Dr. Masad Barhoum, said, “The wounds are characteristic of shrapnel injuries to the brain, chest, stomach, and limbs” (Israel Hayom, July 2, 2018). A 14-year-old boy, badly wounded, along with two critically wounded adult men, were also admitted to the center.

A seven-year-old girl in critical condition was admitted to Rambam Medical Center in Haifa. She had extensive upper-body injuries.

At Tel Hashomer’s Sheba Medical Center in Tel Aviv, a 10-year-old girl was being treated for multiple organ failure. Doctors were working around the clock to save her life.

Can the terrorists’ smuggling tunnels be a blessing?

Detection technology used to explore and destroy tunnels dug by terrorists in Gaza has been adapted for medical purposes by Israel, reports Arutz Sheva (July 1, 2018).

The technology was originally developed to enable rescue workers’ cameras to see into cavities in collapsed buildings after earthquake disasters. It consists of a soft and inflatable sleeve, which self-propels the camera at the front of the device.

The same technology was then applied for use in tunnels built by the Hamas terrorist organization under the border with Israel.

Scientists have now modified the device again so it can be applied in colonoscopy exams to detect cancer in the colon. The purpose is to make the invasive medical procedure less uncomfortable. Colo-rectal cancer is the third most common cancer worldwide and kills hundreds of thousands of people each year.

A humanitarian nightmare in Syria’s Deraa province along the border with Israel and Jordan has yielded international sympathy, but little action.

As the Syrian Army, assisted by Iranian military, Hizbullah militia from Lebanon, and the Russian Air Force, descended on Deraa in June to defeat the remaining rebel troops in the southwest corner of the country, 120,000 civilians fled the city. Jordan, which is already hosting 650,000 Syrian refugees, said it could admit no more.

Israel did not remain passive. Like its field hospital on the border, where hundreds of Syrians have already been treated, Israel reacted swiftly with help. 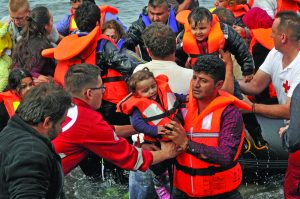 In an overnight operation on Thursday night, June 28, “300 tents, 13 tons of food, 15 tons of baby food, three pallets of medical equipment and medicine and some 30 tons of clothes and shoes were transferred into Syria from four different spots on the border,” as reported by Yedioth Ahronoth the next day.

“The aid was transferred to Syrian refugee camps in the southern and central parts of the Syrian Golan. The camps, located near the border with Israel, house several thousand Syrians under poor conditions with no access to water, electricity, food or other basic necessities.”

Altogether, 60 tons of humanitarian aid were delivered to the Syrian Golan Heights by the Israeli Army.

Praise from a most unlikely source

In a broadcast on Saudi 24 TV (Saudi Arabia) on June 12, Jordanian journalist Yousef Alawnah discussed being in an Israeli prison. He had been incarcerated for 30 months for smuggling explosives. 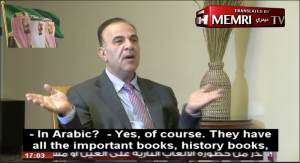 The interviewer may not have been ready for Alawnah’s remarks:

YA: “I am ashamed by [the comparison] between Israeli and Arab prisons. There are 30 to 40 thousand books in the library of an Israeli prison.”

YA: “Yes, of course. They have all the important books, history books, [even] books against Israel and against Zionism….We had an opportunity to acquire culture, to read, and to study many things in prison. Prison was like an institute of education. Of course, the first prisoners had made sacrifices, but in comparison to Arab prisons, I am sad to say….

“It’s not just the prisons. Consider what the Arabs have done to one another. If the Jews occupied Syria or Iraq, would they do all those things? Have the Jews killed as many Syrians, Palestinians, Egyptians, Jordanians, Lebanese, Iraqis and others as Iran’s militias killed in Mosul or in Aleppo? No….

“Do the Sunni prisoners in Iraq have books to read? The prisoners held in the dungeons of the Syrian regime….There is a prison in Syria that has a cemetery above it. The dungeon is underground, and between this dungeon and the surface, there is a layer of soil in which people are being buried. When the executioners dig to bury them, the people below know it. Do you think that they have books?”

Echoing decisions by both the American and Israeli governments, Australia announced on July 2 that it was ending its annual AUS$10 million support for the World Bank’s Multi-Donor Trust Fund for the Palestinian Recovery and Development Program.

Australian Senator Eric Abetz applauded the decision, adding, “It is vital that we ensure that our foreign aid is not being spent on…the promotion of terrorism.” (Israel Hayom, July 2, 2018)

PA senior official and foreign affairs advisor Nabil Shaath, a moderate, called it “filthy talk” during a PA TV Topic of the Day broadcast on July 3 and said the Australians “are worthy of being spat on.” Speaking to them directly, he stated, “I don’t want your 10 million, I don’t want to chase after them.” 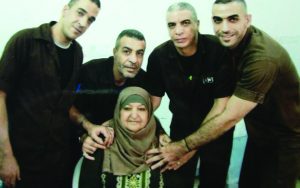 The Palestinian Authority continues to honor the Abu Hmeid family.

The mother, Latifa Abu Hmeid, was honored twice this year in person by PA President Mahmoud Abbas, who called her “the crown on all of our heads.” PA officials praised her as a “fighter” from whom “we draw our determination and strength.” In 2011, she was selected to launch the PA statehood campaign at the United Nations. A PA TV reporter introduced her as a “role model for every Palestinian woman.” Why? Read on.

Five of her six sons are in Israeli jails serving multiple life sentences for committing numerous murders and various terrorist attacks. (The sixth son was killed in a terrorist operation.)

To date, the family has received over US$1 million in “salary” payments from the PA for their terrorist deeds.

Previous Why the Jews?

Next Palestinian plot for peace?