A Christian schoolteacher in Germany refuses to be silent

– Letter to Volker Kauder, Parliamentary Chairman of the CDU/CSU since 2005 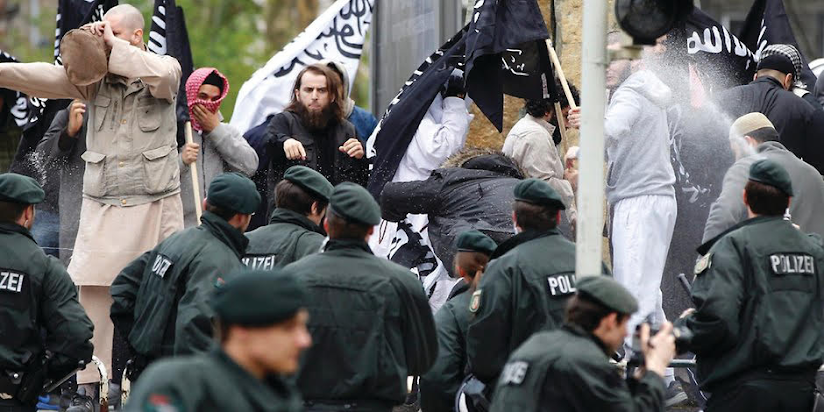 Millions of sincere Christians are praying for the Jewish people worldwide and for God’s protection of Israelis in the face of terrorism. Herbert Nowitzky, a retired Christian schoolteacher in Germany, has gone a step further. Troubled by the rampant growth of anti-Semitism across Europe (and in Germany in particular), and the unique, fawning relationship between governments and the Muslim world, he has appealed to Volker Kauder, Chairman of the Christian Democratic Union/Christian Social Union and the right hand of German Chancellor Angela Merkel.

A few days ago, the text notices of the public-service TV station announced that all anti-Jewish statements, that is anti-Semitic incidents, should be reported to the authorities.

As you are a confessing Christian, also a close confidant of Chancellor Angela Merkel, and presumably have considerable influence with her, I would request of you to consider the testimony of the Quran [Koran], the Hadith [the sayings of Muhammad], and the biography of Muhammad. There you will encounter blatant anti-Semitism of the kind found not only in all Muslim countries, but increasingly also in Germany.

That is why the declaration of Chancellor Merkel that Islam “unquestionably” belongs to Germany is, for everyone familiar with German history, an astonishing misjudgment. If only that was all–but it is much worse. Our land and its citizens are being overrun and threatened by radical Muslims indoctrinated by anti-Semitic teaching, who are among the millions of economic migrants and asylum seekers. The Christians among them are also being harassed and threatened. Without a parliamentary ballot, Madame Merkel has made a single-handed decision that opens Germany’s gates wide to Muslims without asking what the voters think. More mass immigration, along with more anti-Semitism, is imminent. 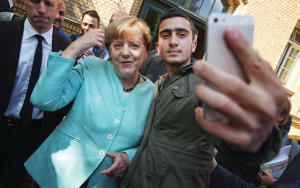 Taking a Selfie: German Chancellor Angela Merkel with a refugee

Wolfgang Schäuble [president of the German Parliament and its longest-standing member], was the first to declare openly, “Islam belongs to Germany,” after a visit to Turkey years ago.

The former president of parliament, Christian Wulff, spoke openly for Islam. He contributed significantly to the decision to introduce the teaching of Islam in public schools, beginning in Hamburg.

This was supported by Chancellor Merkel. Yet, all should have recognized that conservative Islam and a liberal-democratic social order are incompatible. Muslims themselves state so clearly–but no one is listening.

Another former president of parliament from the CDU, Norbert Lammert, did not bother bringing the Islam debate to parliament. Quite the contrary, the Roman Catholic politician repeatedly invited the highest Sunni-Muslim authority, Ahmed Muhammad el-Tayeb, the president of Al-Azhar University, Cairo, to lecture [in Germany] and listened respectfully to his sanitized explanations of Islam. The well-known harsh persecution of Christians in Muslim countries did not merit a mention by Lammert.

Former Foreign Ministers Frank-Walter Steinmeier and Sigmar Gabriel acted similarly when they visited Israel but chose to meet with opposition groups and in so doing snubbed the Israeli government demonstrably on two occasions. On his last visit among the Palestinian-Arabs in Ramallah, Steinmeier honored a murderer and arch-terrorist by placing a wreath at the grave of Yassir Arafat. It was a shocking act which put German-Jewish friendship and cooperation with Israel into question.

Under its first post-WWII chancellor, Konrad Adenauer, Germany obligated itself to be on the side of Israel. Is this fundamental principle of the state no longer valid?

Previous “Whoever hits you on the right cheek…”

Next The unreported story about the Palestinians