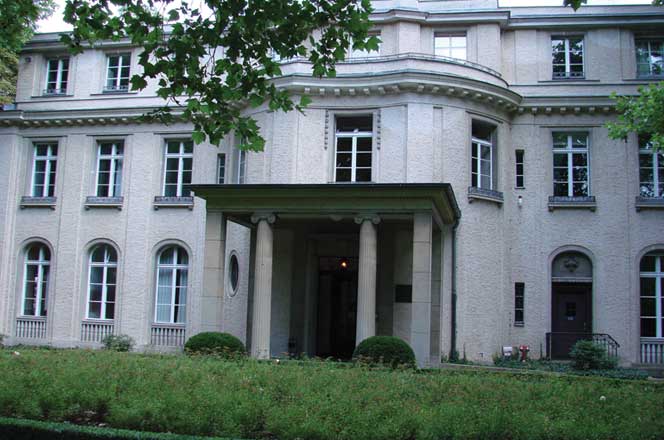 The Spanish-American philosopher George Santayana wrote, “Those who cannot remember the past are condemned to repeat it.” Sincere individuals want to prevent that from happening. On January 20, 1942, an utterly criminal conference was convened in Berlin-Wannsee. Its goal was to coordinate the Nazi “Final Solution of the Jewish Question” with the cooperation of all public authorities. Participants included 15 leaders of the German SS and the elite of various departments of the National Socialist Party administration. The chairman was SS-Obergruppenführer Reinhard Heydrich, the Reich Protector of Bohemia and Moravia in occupied Czechoslovakia.
SS-Obersturmbannführer Adolf Eichmann presented a list of countries, whose combined total Jewish population numbered 11 million, half of them in unoccupied countries. In compliance with Hitler’s “prophecy” prior to his election, that he and his followers would rid all Europe of Jews, there had already been mass murders in the east, in particular at the hands of the paramilitary SS-Einsatzgruppen (task forces), since 1939.
Death camps with gas chambers and crematoria already existed and more were being built. Now there would be an acceleration of the genocide, to be achieved by severe forced labor (to assist the military mobilization), and by starvation and gassing. This would be achieved by mass deportations to the German extermination camps, mostly in occupied Poland. Those unable to work–the handicapped, elderly, ill and children–would be selected for gassing immediately upon arrival. The Nuremberg Laws of 1935 were to be strictly adhered to for those who were not eligible to be deported: Persons of second-degree mixed marriages, therefore not fully Jewish, would be sterilized.

At the conclusion of the conference, which lasted all of 90 minutes, and more than half of whose participants included PhD’s, the highly decorated Heydrich, who had been appointed by Reichsmarschall Hermann Göring himself to carry out the meeting, was astonished that there had been no resistance to the presentation of the program of genocide (nor in the discussions during the subsequent drinking rounds).
Volumes have been written by eyewitnesses and historians about the events through the end of WWII. I myself can share a part of what happened to me personally and how it left its lifelong memories with me: How I witnessed gruesomely the shooting of my father on November 11, 1939; my mother’s forced labor in a military laundry at the hands of the occupying power and the resulting fatal deterioration of her health; the starvation of my 20- and 22-year-old sisters in the ghetto; forced labor personally planting trees in cut-down forests and heavy labor on farms as a teenager. In my case, the latter was partially responsible for saving my life because most men had been sent off to war and God gave me (as a child, His child!) the strength to do adult work.
Here I’d like to add the following: We learned from the sister of one of the murderers of my father that I was to have been shot on the same day by him and two others, members of the SS. The prayer of my father in the presence of the SS when they came to arrest him resulted in a delay till the next Shabbat. But then one of the three men drowned when they were coming for me. All of them had been drinking and, on the way, one of them stepped into a rowboat in a nearby pond. It began to rock and capsized. I was free again.
An additional personal experience: A boy in my village told a German soldier that I was a Jew. He immediately grabbed his rifle and pointed it at me. To this day I don’t know how I managed to flee so quickly before he squeezed the trigger. But I live and God knows the purpose for it.
In pictures of railroad cars transporting troops in 1939, I often see the slogan, “Off to Poland to flog the Jews!” For me it was no joke. I experienced it painfully. These wagons transported enlisted privates, simple soldiers. Hitler’s war was against the Jews from 1939 on. Off to Poland–where, at the time, the most Jews on earth lived!

Fanaticism to the end

Of the dozen German concentration- and death-camps I have visited in Germany or in countries occupied by Germany, I want to refer to just four examples.
The Bergen-Belsen concentration camp near Hannover, where the famous 15-year-old Anne Frank died, was liberated by British and Canadian troops on April 15, 1945. Some 13,000 corpses of people who had been murdered in the last few days lay scattered, among them also many half-dead. Captured SS guards (many women among them) were ordered to bury the dead. To prevent an epidemic, the Allies brought in large tracked vehicles on April 19 to shovel the piles of corpses into mass graves. It was a testimony of insane mass murder till the very end of Nazi rule.
Hinterbrühl Seegrotte (lake grotto)–In bomb-proof former gypsum mines, 11 mi. (17 km.) from Vienna, airplane parts were manufactured for the Heinkel jet fighter HE 162. One thousand eight hundred prisoners at a time from the Mauthausen concentration camp worked in 24-hour shifts. I have spoken with a surviving Jew and eyewitness who worked there. As the Allied troops drew close in 1945, the Nazis ordered a death march back to Mauthausen. The weak ones were killed immediately with gasoline injections, others were shot. Their services were no longer needed, so these doomed ones were murdered brutally in the final days. Today, a quarter million tourists visit the largest underground lake each year. A small memorial plaque reminds of the unspeakable suffering here in the neighborhood of the Viennese Woods.
Palmnicken near Königsberg/Kaliningrad, Prussia. On January 27, 1945, a death march of concentration camp prisoners from Stutthof and adjacent camps reached the town of Palmnicken, where they were supposed to be drowned in the Anna grotto in the amber mines. En route, there were shootings, 2,000 of the weak ones were beaten to death, and it was discovered the grotto was closed. Then, on January 31, all 3,000 Jews were murdered (some say as many as 7,000) under the orders of the command of SS-Senior Squad Leader Fritz Weber. Women were sent onto the frozen shore of the Baltic Sea and were mowed down by machine-gun fire. Men were placed behind each other in pairs so that two could be killed with just one bullet. When bullets ran out, hand grenades were tossed among them to rip them apart. Some women managed to flee, so the mayor of Palmnicken gave members of the Hitler Youth (under 16 years, all others having been sent to the front) weapons and schnapps with the order to find the fugitives and shoot them. Thirteen Jewish women escaped. At that point, the Allies had penetrated deep into Germany, Auschwitz had already been liberated, and the Russian troops stood at the gates of Königsberg. The Palmnicken Massacre was the final mass execution before the end of WWII–a fanatical “Final Solution” till the very end in the war against the Jews!
Auschwitz-Birkenau, the capital of the world’s empire of murder. In this German death factory in Poland, 1½ million people perished, 90 percent of them Jews. It became the world’s largest Jewish cemetery–without gravestones. Besides the surviving eyewitnesses today, gas chambers, crematoria and the like are silent witnesses of the horror. I have been there many times. On January 25, 2005, I was invited there as a diplomat Gość Specjalny (special guest) to the 60th anniversary of its liberation. According to the Warsaw press, presidents, prime ministers and monarchs from over forty nations were present, among them Russian President Vladimir Putin and a representative of the Pope from the Vatican. A simple question to Holocaust deniers: Would all these heads of state and dignitaries have come if the Holocaust had not taken place? Didn’t the presence of this international elite disprove such a craven lie? We can only appeal to common sense, to the sanity and reason of people. 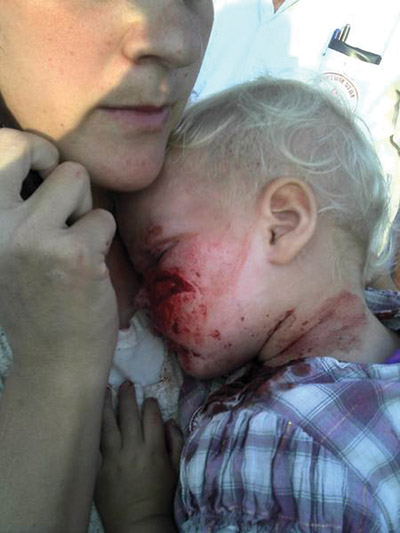 The German Nazi rule lasted just 12 years, six of them at war, costing the lives of 40 million civilians and 25 million soldiers. With the war lost and Europe in ruins, the rulers committed suicide or were hanged. Adolph Hitler, Hermann Göring, Joseph Goebbels, Heinrich Himm-ler, Fritz Weber and many of the 15 “intellectuals”: suicide. The list is long. Reinhard Heydrich died from wounds sustained in Prague. Auschwitz-Kommandant Rudolf Höss was sentenced to death by a Polish court and hung in his own camp. Adolf Eichmann saw the new state of Israel, was sentenced there and hung by rope. The utopian Nazi glory led to chaos and disappeared. Or not? Does the evil intent yet survive?
When people today emulate the depraved and seductive national-socialism ideas (moreover, there is no neo-Nazism; it is the same old curse from the abyss!), then we are dealing with weakness of conscience or a disposition towards extreme wickedness. A revival and reorganization, even disguised in the wrapping of a political party, has nothing to do with democracy or freedom of opinion. It should be prohibited as criminal.
And the Jews? We survived genocide. Our numbers have increased by millions again. Even the re-establishment of the Jewish state could not be hindered. Israel even has one of the finest defense armies (IDF) in the world. “Am Yisrael chai, od Avinu chai!”–The people of Israel live because our Father lives!
The annihilation of the Jews was tried before and will be tried again. “For, lo, Your enemies make a tumult, and they that hate You have lifted up the head. They have taken crafty counsel against Your people, and consulted against those sheltered by You. They have said, ‘Come, and let us cut them off from being a nation; that the name of Israel may be no more in remembrance.’ For they have consulted together with one consent; they are confederate against You” (Ps. 83:2-5).
“Why do the nations rage, and the peoples imagine a vain thing?….He Who sits in the Heavens shall laugh….Then shall He speak unto them in His anger, and in His wrath He will terrify them” (2:1-5).
God has the final word: “Thus says the LORD, Who gives sun for a light by day, and the ordinances of the moon and of the stars for a light by night, Who divides the sea when its waves roar; The LORD of Hosts is his name: ‘If those ordinances depart from before Me,’ says the LORD, ‘then the seed of Israel also shall cease from being a nation before me forever’” (Jer. 31:35-36).