In every generation, the Eternal delivers us

News reports worldwide have told of the “wave of terror” sweeping across Israel. Messages from our readers assured us of their prayers for our safety and urged us to be careful. We are grateful for every expression of concern.

It is true that in Israel it is wise to always be on guard, watchful. We have witnessed Islamist violence and seen its destructive results. Security guards, therefore, still check handbags at the entrance to supermarkets, banks and office buildings. Metal detectors are in every public lobby.

In March and April this year, there were four murderous terror attacks, three of them in one week. All 14 victims were innocent civilians, two rabbis and two guest workers from Ukraine among them. Half the perpetrators were Arabs with Israeli citizenship.

Our war is with the Jews

The reasons given for the terror attacks and violent Arab demonstrations are many and tedious: Incitement through the Arab media; economic frustration; anger about the Israeli “occupation” (sic); anger about Israeli rapprochement with the Gulf States and Sudan, Morocco and Turkey; heightened volatility during the exhausting month-long fasting of Ramadan; the presence of thousands of Easter pilgrims and Passover tourists, and more.

The incitement against Israel is based on lies disseminated without interruption for decades. It begins with children being indoctrinated about “expulsion” and “stolen” land, and it is fostered on the internet and by the traditional news media. The Arab-Israeli political parties and Muslim clergymen rage against Israel at every public platform. This occupation propaganda consists of worn-out arguments, but decades of repetition of fantasies about regaining lands has raised the narrative to gospel status.

The economic frustration is misplaced. Israeli-Arabs are among the wealthiest and most-educated Arabs in the Middle East. In fact, both intifadas (uprisings) took place while the economy was thriving. Investing money in Arab communities will reduce the economic gap between Jews and Arabs, but it won’t stop terrorism. Jenin is the most flourishing city in the West Bank, yet it is a greenhouse of terror.

Admittedly, every year the month-long daytime fasting by Muslims during Ramadan leads to short tempers and trigger-happy outcomes.

Too, with the increased number of tourists in Israel post-pandemic, and with Easter and Passover coinciding with Ramadan, and with the current US government ignoring Palestinian provocations, this season presented a perfect opportunity for stoking further trouble.

In fact, even Arab-Israeli Knesset (parliament) members were urging Arab-Israeli soldiers to fight against the Israeli authorities.

But the key point is this is an ongoing situation, not a new one. Dr. Kobi Michael, former deputy director general of Israel’s Ministry of Strategic Affairs, senior officer in army intelligence, and senior advisor at the National Security Council, emphasized in a European Leadership Network (ELNET) briefing on April 11, that 500 terror attacks were thwarted in Israel and Judea-Samaria last year. Many others, however, were not thwarted. 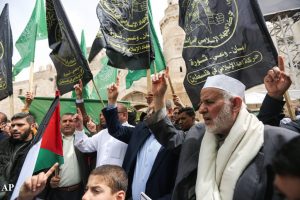 Behind the current outbreaks are Palestinian Islamic Jihad (PIJ) and Hamas. (Recently, Islamic State [ISIS] is also edging in.) They have never recognized any right of Israel to exist. Their active membership may be only a few dozen, or a few hundred, persons, but it is enough to threaten the stability of the societies in which they live. They are popular because they believe in armed resistance against Israel. They flourish in Gaza and have growing influence in the PA and in Arab-Israeli towns. Arab political and Muslim religious leaders (both in the PA and in Israel) encourage them. In Jordan, King Abdullah also encouraged rioting on the Temple Mount.

The terrorists are sponsored by Iran, which is earning oil revenues again. Terrorists are paid small sums of money to carry out attacks, US$300 for a murder, US$100 for an attempted murder. That’s a small sum, but little is needed by groups that aren’t a state and so have minimal expenses.

As the Europeans wean themselves off Russian fuel due to the Ukraine conflict, they will look to Iran as a replacement supplier. To achieve better relations with Iran, they will push for a nuclear deal despite Israel’s objections.

Should the deal with Iran be signed in the coming weeks or months, sanctions will be lifted and Iran will be awash in hundreds of billions of dollars of revenue, becoming the dominant power in the Middle East. Iran’s proxy groups across the Middle East, like Hamas, PIJ, Hizbullah in Lebanon, and the Houthis in Yemen, will all benefit financially. In the past, terror attacks as distant as Argentina or Bulgaria have been tied to Iran. For this reason, Israel and many Arab states object to a nuclear deal with Iran.

What, then, is the root cause of the violent demonstrations and the terror attacks? Looking for sociological, economic or psychological explanations is beside the point. It is the millennia-old hatred of the Jews. It hearkens back directly to Exodus 17:16, where God warns that in every generation there would be war with Amalek.

A few weeks ago, Jews worldwide celebrated Passover (Pesach), during which the story of the Exodus is recounted in detail and the entirety of Jewish history is alluded to. Jews recall that in every generation there are those who sought to destroy them, but God’s deliverance prevailed.

Today, this hatred is greater even than the nationalist yearnings of the Palestinian-Arabs. When Israeli Prime Minister Ehud Olmert offered 100 percent of the West Bank to the Palestinians for a state, along with a modest right of return for Palestinians, they rejected it.

When US President Barack Obama offered them a state in his 2014 peace plan, it was also rejected. No Palestinian group can dare accept the existence of a Jewish state. It would be suicidal for them (even Egyptian President Anwar Sadat was assassinated for it).

The Palestinian goal of wiping Israel off the map is summed up in their decades-long rallying cry, “From the river to the sea.”

The roots in Islam

Richard Sherman writes in The Jerusalem Post (April 25, 2022) about the roots of Muslim hatred of Jews: “According to the Quran, in 627 in Medina, Muhammad personally decapitated 600-900 unarmed Jewish men and kidnapped and sexually enslaved 1,000 Jewish girls and women. Muslims are taught that everything Muhammad did was perfect and to emulate him at all times.”

Sherman also cites the notorious endtime teaching in the Muslim collection of traditions, the Hadith (Saheeh Muslim 2922): “The Hour will not begin until the Muslims fight the Jews and the Muslims will kill them, until a Jew hides behind a rock or a tree, and the rock or tree will say: ‘O Muslim, O Slave of Allah, there is a Jew behind me, come and kill him.’” The text is widely quoted in the Muslim world and is even part of Article 7 of the Hamas charter.

It is no wonder then that, when world events (COVID-19, the Russia-Ukraine War) sidelined the PA, it resorted to violence, its favored old ploy, to get notice (and more funding from the international community).

Dr. Daniel Schueftan (ELNET, April 21, 2022), the chairman of the National Security Studies Center, University of Haifa, and senior foreign-policy and defense advisor to prime ministers for 40 years, states: “If Israel were to actually withdraw completely from all lands it controls, the Palestinians would still kill you,” whether it takes months or centuries.

He urges Israel as the Jewish state to be far more assertive in declaring, “We are here, we are not negotiating regarding a Palestinian right of return, and we are not withdrawing from the West Bank.” He is unconcerned that, as a result, “European objections would intensify.” Regardless, “the Palestinian fight will continue.”

All this presents a scenario in which there is a zero percent possibility of achieving peace. Israel’s engagement in periodic peace negotiations is merely theater, a useless effort, regardless of how much the Europeans or Americans press for them. The best plan is a standoff in which Israel must remain strong in order to protect its citizens.

Arab states have had enough

For many Arab states today, it’s enough. They are tired of the Palestinians’ veto power in the Arab world over any action related to Israel. Fearing the threat of a nuclear Iran, these Arab states are acting independently. The Abraham Accords of 2021 are the result. The UAE, Bahrain, Morocco, Sudan, Turkey, even Saudi Arabia, are benefitting from urgent security consultations and trade with Israel, as have been Egypt and Jordan for decades.

The lion is not yet sleeping with the lamb (Isai. 11:6). We can debate whether the good relations with the Arab states will last. As long as they do, it is prudent to foster mutual respect and to encourage trade, tourism and cultural exchange. Should events turn foul, God’s deliverance will prevail.

Previous Israel’s army has room for everyone

Next Rearranging the chairs